skip to main content
Return to Fordham University
You are at:Home»Colleges and Schools»Fordham College at Rose Hill»Gift to Aid Undergraduate and Social Work Students
For the Murray-Houlihans, pictured above in a photo from 1965, doing good isn’t so much a calling as a matter of course.
A new gift from James J. Houlihan, GABELLI ’74, and the Houlihan family will support both the Founder’s scholarships and a sizable fellowship at the Graduate School of Social Service (GSS).

The $630,000 gift to the University will allocate $305,000 toward the Fordham Founder’s Undergraduate Scholarship fund and $250,000 toward a GSS fellowship named for Houlihan’s mother, Mary Murray Houlihan, Ph.D., GSS ’49, ’86. Two additional gifts totaling $75,000 will go to the athletics department for the McLaughlin Family Basketball Court and the baseball team.

“This scholarship will support many students in their pursuit of masters and doctorates in social work,” said GSS Dean Debra McPhee, Ph.D. “Many of these students come from first-generation families, and pursing their degree is often at great sacrifice to themselves and their families.”

Murray Houlihan, 89, was a first-generation student herself, as one of six children of Irish immigrants. 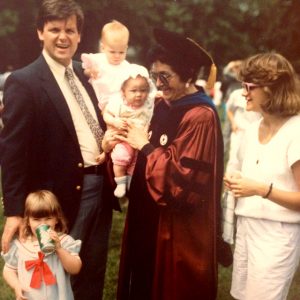 The gift will create the Mary Murray Houlihan Endowed Fellowship. She is seen here at the 1986 commencement in her doctoral gown with her children and grandchildren.

“The Founder’s scholarship has always been a great program for many of Fordham’s first-generation students, just like my mom,” said Houlihan.

If you ask Murray Houlihan about her own calling to pursue a doctorate in social work, she deflects the question and talks of other family members whose devotion she admires. But in relaying family stories, one gets the sense that, for the Murray-Houlihans, doing good was a matter of course.

The family boasts many Fordham graduates over three generations as well as a few priests and nuns. Murray-Houlihan’s brother, Msgr. James Murray FCRH ’48, LAW ‘51, and GSS ’58, went on to become executive director of Catholic Charities for 27 years, where Murray Houlihan later offered her expertise in care for the aged. Her brothers John and Patrick Murray both graduated from Fordham College at Rose Hill in 1957.

Murray Houlihan said she remembers the family volunteering at St. Patrick’s nursing home in the Bronx when she was a child. The family used to kneel at the dinner table after supper to say the rosary, and her parents would recite poetry at the table—with her father and mother sharing the recitations.

“They loved Shakespeare and Tennyson,” she said. “One would start and the other would fill in; we were fascinated.”

The thought of her parents and poetry aroused a memory of a high school teacher who made her memorize poems and their punctuation, she said.

“The quality of mercy is not strained, semicolon, it droppeth as a gentle rain from heaven, comma, upon the place beneath,” she said with a smile, quoting Portia from Shakespeare’s Merchant of Venice. “I never forgot those lessons!”

She also recalled the content of Portia’s speech—that mercy happens by chance in the same way that rain falls by chance, and that the giver receives as much as the receiver.

Although the Houlihan matriarch would not speak of her own benevolence, her son noted that, after she earned her master’s in social work at a time when few women did so, she put her career aside to raise her six children. When the children were grown, she returned to Fordham to begin work on her doctoral dissertation, examining at-home healthcare for the elderly.

The experience confirmed her belief that, whenever possible, the elderly should be able to be cared for in their own home—as she is today.

“Her research sent a positive message to my children and the family,” said Houlihan, noting that Mary Murray Houlihan’s granddaughter, Siobhan Houlihan, was inspired to attend GSS, too, and graduated with her master’s last spring. Several other grandchildren are working as teachers in the New York area.

“After raising her children she could have gone back and practiced with her master’s in the field,” said Dean McPhee of Murray Houlihan’s choice to pursue an advanced degree. “But she clearly felt strongly about professional service and a professional education. GSS is extremely grateful for the support of the Houlihan family. Through their generosity they are making this same opportunity available to young men and women who want to pursue an education and dedicate themselves to the service of others.”