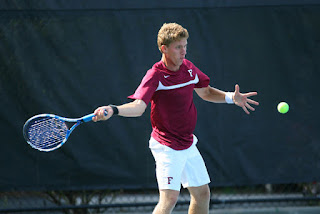 Gabelli junior Kuba Kowalski is the Rams’ top singles tennis player and it earned him a chance to meet top-seeded Roger Federer at the U.S. Open recently.

Kowalski was featured in Bloomberg BusinessWeek in a piece that focused on his tennis game, academics (he has a 3.8 grade-point average as a finance major) and internships, which includes  JPMorgan, where he’ll shadow a financial adviser this semester.

“As a tennis player, there is a lot to learn here from just observing the best in the world,” Kowalski told Bloomberg BusinessWeek. “I’ve had a chance to see the process from beginning to end, and it’s definitely motivating.”

Kowalski, who hails from Poland, was the country’s second-ranked junior when he was in high school, according to the piece. He said he chose Fordham because of it’s proximity to Manhattan. “He’s not the first player to choose the Rams because of the city’s business opportunities, according to Fordham coach Cory Hubbard, who said the location is ‘the No. 1 thing I push’ when recruiting.” Read more here.