Four days before she died on Dec. 20 from complications related to a rare form of liver cancer, Gianna Rita Signorile, a 21-year-old second-year student at the Gabelli School of Business, accomplished something no one was sure she could: She completed coursework for five classes she enrolled in for the fall semester.

“She’d always been strong-minded and determined in everything she did, but I saw a different side of her,” said her mother, Dawn Signorile.

“I saw a determination I’d never seen, almost like nothing was going to stop her, even though she was in pain so much. It was like she knew she had limited time, and she just wanted that to be her legacy, that she finished at a prestigious school.”

A native of Nutley, New Jersey, Signorile transferred to Fordham in the fall from the University of Maryland. She’d undergone intensive treatments in Chicago for fibrolamellar carcinoma, a cancer of the liver that affects teens and young adults with otherwise healthy livers. She was diagnosed with the disease in May 2020. 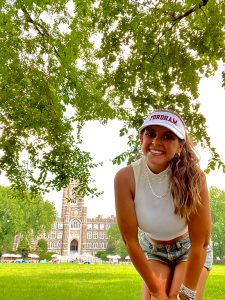 Gianna Signorile in 2021, when she enrolled at the Gabelli School of Business as a transfer student.

Signorile recovered and enrolled at the Gabelli School of Business, moving into an off-campus apartment in Belmont in fall 2021. She was only able to stay for a month and a half before the cancer returned, but Dawn said she made the most of her time in the Bronx.

“She loved the area around Arthur Avenue, loved the delis there. She went to the New York Botanical Garden, all while she had stage-four terminal cancer. She was living her life like she didn’t have cancer, and it was very difficult to do that,” she said.

When she first enrolled, Dawn said, she suggested that perhaps her daughter take only two courses, but Signorile insisted on taking a full course load lest she fall behind her peers. Academics were paramount to her; at Nutley High school she was a straight-A student and a member of the National Honors Society, and at the University of Maryland she was on the dean’s list.

At Fordham, Dawn said her daughter was inspired by professors such as Dennis Cappello, a clinical associate professor of law and ethics, and aspired to become a lawyer.

“She knew it was a great institution and she wanted to continue her studies. She didn’t want just any school; she wanted a school that had high standards, and when we visited Fordham, she just loved it.”

Cappello said that even in her short time in his class, she left an impression, and they shared laughs about growing up in Italian families. He learned about her illness after the midterm exam and last spoke to her via Zoom, just before Thanksgiving, from her parent’s home.

“Although tired, she was upbeat as we discussed a plan to complete the course. I e-mailed Gianna the first week of December, to which I did not receive a reply. That concerned me, but she later submitted her final exam, which gave me hope. When we last spoke, Gianna made me promise I would not show her any favoritism due to her illness. I kept my word,” he said.

“She was special, and we at Fordham were lucky to have her.”

Joseph M. McShane, S.J., president of Fordham, expressed his condolences on the occasion of her passing.

“It is heartbreaking to lose someone so young, and especially to such a cruel disease. Everyone who knew Gianna described her as determined, multitalented, and a natural leader. We grieve her death and the loss of so much potential,” he said.

“Gianna was a beautiful, kind soul, and we were honored to learn from her while she was at our school,” she said.

Like the life she lived, Signorile’s last month was filled with fun and hard work. She visited Nashville with friends but returned early when her health faltered. At the same time, Dawn said, she scheduled a CT scan so that it wouldn’t conflict with an interview for an online job. Given that she had to relearn in 2020 how to walk after a 16-hour surgery left her in intensive care for 89 days, it wasn’t surprising that she continued to work through the pain up until the day she died, Dawn said.

A Mass of Christian Burial was celebrated on Dec. 27 at Holy Family Church in Nutley, followed by interment at Holy Cross Cemetery. In lieu of flowers, the family asks for donations to a GoFundMe page to help cover funeral expenses.

“It was an honor to raise you into a beautiful young woman and I am grateful for every moment we shared through your childhood up until seeing you transform into an independent, smart, free-spirited beautiful adult,” Dawn wrote on the page when her daughter died.