skip to main content
Return to Fordham University
You are at:Home»Colleges and Schools»Gabelli Alumna Wins Schwarzman Scholarship to Study in China

Ran Niu, GABELLI ‘16, is one in a select group of students awarded a new scholarship geared toward training future leaders to strengthen links between China and a globally shifting world.

Join Fordham’s fellowships office for an information session on becoming a Schwarzman Scholar on Feb. 21.
Niu, who graduated last year with a master’s degree in global finance, is one of 31 students to have received a Schwarzman Scholarship, established in 2013 by a foundation started by Blackstone Group CEO Stephen A. Schwarzman. She is Fordham’s first Schwarzman scholar.

In August, she will enroll at Schwarzman College, a new institution that is part of Beijing’s prestigious Tsinghua University, with the goal of earning a master’s degree in global affairs. 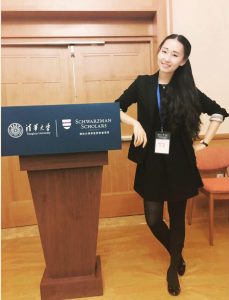 Niu, who is living in Shanghai and working with the social entrepreneurship competition “China Thinks Big,” called the opportunity a “dream come true.” She said working in international affairs has long been her goal, and having interned in United Nations’ Regional Commissions New York Office, she was considering another internship at the United Nations when she received word that she’d won a Schwarzman Scholarship.

“I was attracted by its vision of ‘global leadership for the 21st century.’ As an international student who has studied and worked in New York City, I feel connected to this global vision,” she said.

Niu also said she hopes that studying at Tsinghua—which counts among its alumni many of  China’s top political and business leaders—will help her understand her home country.

“I see myself as the product of both the Chinese and U.S. educational systems, having spent my high school and college years in China and then the majority of my post high-school years in the states,” she said.

Rob Garris, global director of admissions for the Schwarzman Foundation, said its hope is that the knowledge and relationships that students such as Niu develop during their time at Schwarzman College will bear fruit decades later.

“What we’re trying to do is ensure that all around the world, the next group of business, political, and nonprofit leaders have a deep knowledge of China and the role that it is playing in the world, and have strong professional contacts with their peers there,” he said.

“When they become leaders, they can use their positions to help ensure there is a good flow of information between China and the rest of the world, and that relationships are peaceful and prosperous.”

Garris said that Schwarzman scholars were chosen based on their having demonstrated initiative, an ability to recruit others to sign onto their projects, and a record of persisting in the face of obstacles.

“Creating change in any sort of system, whether it’s a political system, a business system, or the nonprofit world, is always going to encounter resistance,” he said. “So we ask candidates to give us tangible examples of when they’ve encountered that resistance, solved it, and pushed past it.”

Currently in her fifth year of working for the Harvard College Association for U.S.-China Relations, Niu has played a leadership role in designing content that promotes transitional dialogue between young leaders of China and the United States. She interned at the U.N. Regional Commissions New York Office, under the Economic and Social Council.

She said her long-term aspiration is to build incubators that enhance culture and business exchanges among countries, a goal that has been made possible from her time at Fordham. Gabelli School of Business adjunct professor Anthony Palma, and Fordham School of Law adjunct professor Carole L. Basri helped her apply for the scholarship, and living in New York City provided opportunities to listen and learn from influential industry leaders.