skip to main content
Return to Fordham University
You are at:Home»University News»G. Richard Dimler, S.J., Professor and Researcher of Jesuit Emblems, Dies at 88
Photo courtesy of the Jesuits Maryland Province and USA Northeast Province
G. Richard “Dick” Dimler, S.J., a professor who taught German and computer science at Fordham for 34 years, died of COVID-19 on April 14 in a Philadelphia hospital. He was 88.

“We greatly mourn the loss of Father Dimler,” said Joseph M. McShane, S.J., president of Fordham. “He was a teacher through and through, a gentleman, a warm and engaging colleague, a dear friend to many within the Jesuit community and without, and he had a profound effect on several generations of students. Our hearts go out to his family and friends at his loss.”

Father Dimler was born on October 21, 1931, in Baltimore, Maryland, to George H. Dimler and Gertrude K. Dimler. He graduated from Loyola Blakefield, a Jesuit college preparatory school for boys, and attended Loyola College for one year before entering the Novitiate of St. Isaac Jogues, a Jesuit seminary in Wernersville, Pennsylvania, in 1950. A little more than a decade later, he was ordained a priest.

Over his lifetime, Father Dimler earned many degrees from institutions across the U.S. and the world, including two degrees from Fordham; a master’s degree in German from Middlebury College in Mainz, Germany; a doctorate in German literature from the University of California, Los Angeles; and a master’s degree in computer science from Iona College in New Rochelle, New York. He also completed his Jesuit studies at Fordham in 1951.

Father Dimler put his extensive education to use as a lifelong teacher. In 1970, he taught German literature at Loyola College for several years. Two years later, he moved to Fordham, where he taught German and computer science for more than three decades.

“Whenever you saw him on campus, as a greeting, instead of a wave, he would do that ‘V’ symbol from the peace movement in the ’60s or ’70s,” recalled a past colleague, Susan Ray, Ph.D., professor emerita of German and co-chair of Fordham’s self-study steering committee. “He was a good colleague.”

He was a good teacher, too, according to former student Kevin Munnelly, FCRH ’83, GSAS ’85. Munnelly recalled the days when Father Dimler would walk into German class wearing a tweed jacket. He was an engaging, enthusiastic professor who held a “German cultural day” for his class and never judged his students, he said.

“Some really intelligent people talk at you. He talked with you,” said Munnelly, who is now assistant vice president for academic budgets and logistics at Fordham.

In 1999, Father Dimler became a research professor of Jesuit emblem studies, “a role dear to his heart,” according to an obit by the Jesuits’ Maryland Province. He later published several books on the subject, including The Jesuit Emblem in European Context (Saint Joseph’s University Press, 2016), co-authored by Peter Daly, professor emeritus of German at McGill University.

Jesuit emblems were a powerful teaching tool in a time when many people did not read, explained Frank Borchardt, Ph.D., a longtime friend and Fordham colleague.

“The Jesuits used those to teach people religion. We don’t think about it in today’s society, but during the time that the Jesuits started the emblem books, many people couldn’t read,” Borchardt said. “The purpose of the emblems was to give them a picture of whatever they were trying to teach.”

Borchardt was one of Father Dimler’s closest friends. They first met in 1972, when Father Dimler joined Borchardt’s office space in the German department. The two scholars shared an interest in computer science, spirituality, and Jesuit emblems. In the following years, they shared meals at least two or three times a week. Father Dimler often invited Borchardt into the Jesuit community for lunch. On Fridays, Borchardt invited him to Arthur Avenue for a classic Italian meal—typically fillet of sole Francese, a flounder cooked in butter and white wine.

“I wouldn’t have asked anybody else. He knew the kids from the time they were born, and he knew me many years before,” said Borchardt, who retired from Fordham six years ago. “He was my best friend.” 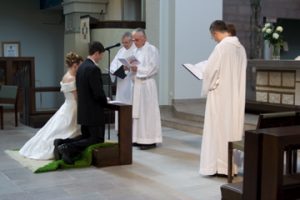 Father Dimler and Borchardt, on the left, at Borchardt’s son’s wedding on Oct 19, 1981

“We celebrated the important dates in each other’s lives,” he added. “The other day was my birthday. It was the first birthday in all of those years that I didn’t get a card from him.”

In addition to writing numerous articles, Father Dimler served as editor of the University’s quarterly publication, Thought, which published articles and reviews related to theology, philosophy, sociology, history, and education.

After retiring from teaching, Father Dimler moved to Venice, California, and served as a parish priest at St. Mark Church for several years. In 2009, he returned to Wernersville to serve in pastoral ministries at the Jesuit Center for Spiritual Growth. He retired from active ministry and moved to the Colombiere Jesuit community in Baltimore, but continued to research Jesuit emblems.

Around the time of his death, he had been living at the Manresa Hall health care center in Philadelphia, where more than a third of the Jesuit priests who lived there were killed by the coronavirus. Father Dimler was the first to pass away. At Fordham, he is among more than 50 members and close relatives of the Fordham community who have died in the COVID-19 pandemic.

Father Dimler was buried in a private service in Wernersville. He is survived by two sisters, two brothers, and his nieces and nephews. Memorial contributions for Father Dimler can be made to the Jesuit Seminary Guild at 7400 York Rd., Towson, MD 21204.