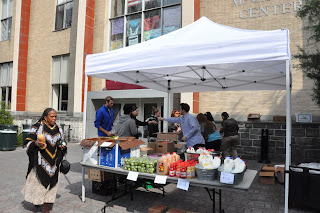 Visitors to the McGinley Center at Fordham’s Rose Hill campus on Monday were treated to visions of carrots, basil, apples, kohlrabi, radishes, lettuce, and grapes, all for sale by members of the student culinary council.

The market, which was open from 11 a.m. to 2 p.m., was sponsored by the council and Fordham Hospitality Services, which purchased the vegetables from farmers 150 miles from campus or closer.

Nell Roberts, FCRC ‘11, a sustainability intern at Sodexo Services, said the market, which was held in conjunction with “National Food Day” generated roughly $450, which will go toward Lot Busters, a local urban garden.

She said she hoped to educate people about the issues that affect farmers, distributors and consumers in the country’s current food system and get students and faculty members to think about where their food comes from.

“Sodexo believes it’s important to support small local businesses where the farmers get fairly compensated, so that’s what we we’re promoting,” she said. 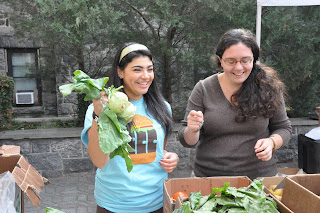 Monday’s market was the second one organized on campus, after one on Earth Day in April. It drew undergrads who snapped up apples for mid-day snacks to well as those with greater ambitions.

Nicole Casey, a junior majoring in psychology at Fordham College at Rose Hill, was one of them. Living in Walsh Hall, she’s able to cook for herself, so she bought a butternut squash.

“I thought, instead of going off campus, this is easy, it’s accessible, and all the money is going to Lot Busters, so I’m happy to do it,” she said.

“I’ll keep it around the apartment for a little bit, as decoration this weekend for Halloween, and then I’m hoping to cook a pasta with it. My mom has made it, so I’m going to call her and give it a shot.”

Nicole Casey and Rosanne Sarro, administrators at the Jesuit community at Loyola Hall, both came away with escarole.

Sarro planned to make it with beans, and although she doesn’t typically buy vegetables at farmers’ markets, she said she would if it was as fresh as what was on hand on Monday. Casey, a frequent Union Square Farmers Market shopper who also belongs to an organic food co-op, said she’s serious about food.

“I like fresh food, organic if possible,” she said. “I think this is a great idea for the kids here, because many of them have kitchens and they can pick up fresh produce and eat it. It’s healthy and I think it’s fun.”