skip to main content
Return to Fordham University
You are at:Home»University News»Four-Star General Visits Fordham’s ROTC
General Paul Funk meets with ROTC members from Fordham and other universities. Photos by Rafael Villa.
Members of Fordham’s ROTC, along with ROTC cadets from Hofstra, St. John’s, and the City University of New York, had the chance to meet with General Paul Funk, the commanding general of the U.S. Army Training and Doctrine Command.

At the March 16 event at Fordham’s Lincoln Center campus, Funk spent time with students, answering their questions and discussing his role as the head of TRADOC, which oversees the training of Army forces and the development of operational doctrine for the Army. Funk oversees about 500,000 personnel who conduct all of the Army’s education, training, and doctrinal development, and he is one of the four most senior general officers in the Army, reporting directly to the chief of staff of the Army. 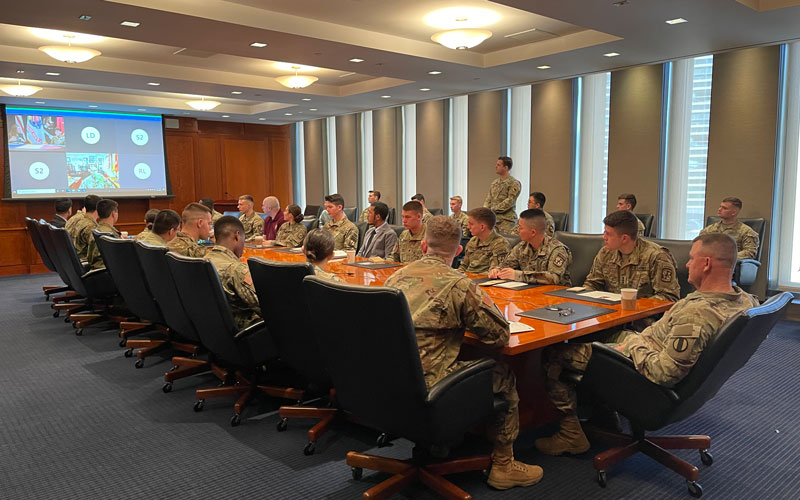 General Paul Funk, the commanding general of the U.S. Army Training and Doctrine Command, participated in a live streamed event with ROTC members from Fordham and other universities.

On the livestream, Funk asked his two lieutenants to share their “Army stories,”—or why they decided to serve—because “nobody cares how much you know until they know how much you care.”

Funk broke down some of the topics discussed, including communication, trust, and the need for hardwork with the students.

“Our job is to do hard stuff and connect people,” he told the students. In order to do that, “we’ve got to overcome things.” 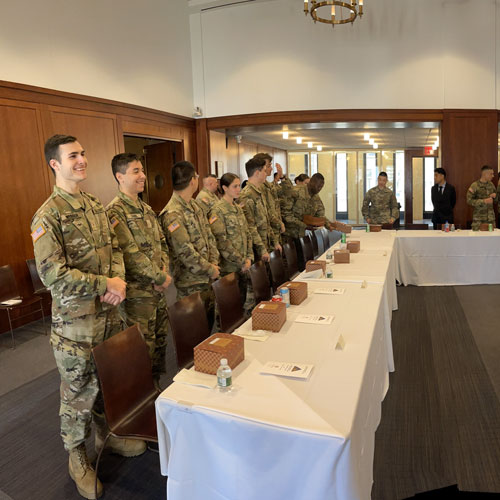 ROTC members from Fordham and other universities had lunch with General Paul Funk after an event.

He gave the example of Gervais, who he said wanted to be an example for those she commanded, so she goes to the gym every day at 5 a.m. to work on her physical fitness and stay in top shape.

Funk also emphasized how TRADOC has been changing its communication practices to address the needs of their current officers and their loved ones.

“Now when you communicate with families—it used to be we brought them all into the gym, we laid it all out a bunch of powerpoint slides, and then we left—now you’re talking across continents because our soldiers are far and wide—immigrants from all over the place—and we have to communicate with those families,” he said.

Funk emphasized the need for honest and open communication because without it, he said, “they’re not going to follow you.”

The event was organized by Jennifer Alvarez, assistant professor of military science and head of Fordham’s Army ROTC program. It was Fordham’s first joint-event featuring a four-star general in charge of Training and Doctrine Command, which is the branch that oversees ROTC programs.