skip to main content
Return to Fordham University
You are at:Home»University News»Founder’s Dinner Raises a Record $3M as Fordham Launches New Fundraising Campaign
Photos by Chris Taggart and Argenis Apolinario
The 2021 Fordham Founder’s dinner was marked by firsts: the first time the dinner raised more than $3 million; the first time in more than two years that the event has been held in person; Fordham’s first time at The Glasshouse, a sparkling new venue on the West Side of Manhattan; and the official launch of the University’s new fundraising campaign, Cura Personalis | For Every Fordham Student.

Fordham’s donors, alumni, and friends gathered on Nov. 8 not only to honor the Founder’s Scholars—Fordham students whose scholarships are supported by the event—but also to pay tribute to the evening’s honorees: Emanuel “Manny” Chirico, GABELLI ’79, PAR; his wife Joanne M. Chirico, PAR; and Joseph H. Moglia, FCRH ’71.

“I would like to thank all of you for supporting this long-overdue annual celebration of our beloved University,” said Joseph M. McShane, S.J., president of Fordham.

Father McShane noted that there was “eager longing” for this Founder’s Dinner, in part because of the last 18 months but also because it kicked off the new campaign for the student experience. 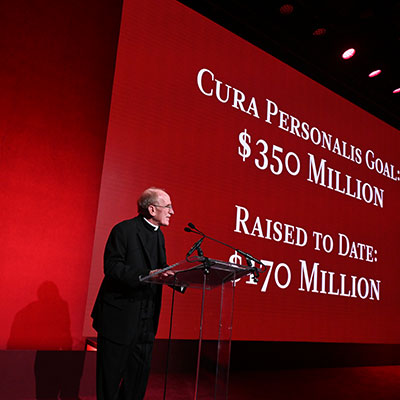 Father McShane announced that Fordham has raised $170 million toward the $350 million goal for Cura Personalis | For Every Fordham Student.

“We also celebrate the public launch of the Cura Personalis campaign, a campaign that will make it possible for the University to continue to redeem the promise that it has made to its students for 180 years: the promise to provide them with the kind of personal, empowering, and transformative care that has always been the hallmark of a Fordham education,” he said. “I am happy to tell you that, thanks to the generosity that you have already shown, we have already raised $170 million toward the $350 million goal. And for that, I thank you from the bottom of my heart.”

All attendees were required to be fully vaccinated and wear a mask when entering The Glasshouse, which featured sweeping views overlooking the Hudson, outdoor terraces, and an airy ballroom lit by modern chandeliers.

David Ushery, the anchor for NBC 4 New York’s 4 p.m. and 11 p.m. weekday newscasts, emceed the Founder’s Dinner, which began in 2002 and has raised more than $42 million to support the Fordham Founder’s Scholarship Fund. Ushery received an honorary doctorate from Fordham in 2019, and his wife, Isabel Rivera-Ushery, is a 1990 graduate of Fordham College at Rose Hill.

“You have supported 130 Fordham students through this program—students who would not have benefited from our fine Jesuit education without your support and generosity,” Ushery told the more than 1,000 attendees. “You have impacted the scholars’ career paths as they are ‘setting the world on fire.’ Your impact on them guides their impact on others.”

That impact will be taken to new levels through the University’s new fundraising campaign. Cura Personalis | For Every Fordham Student, which aims to enhance the student experience as well as prepare students to work for social justice and be leaders in today’s world. The campaign pledges to renew Fordham’s commitment to care for the whole student as a unique, complex person and to nurture their gifts accordingly.

The campaign features four main pillars: access and affordability, academic excellence, student wellness and success, and athletics—with diversity, equity, and inclusion goals embedded in each of them. The night also featured the debut of a new campaign video that highlights the student experience at Fordham.

Founder’s Scholar Sydney Veazie, a senior at Fordham College at Rose Hill, said that the Jesuit value of cura personalis, or care of the whole person, has been an essential part of her experience at Fordham. At Fordham, Veazie said, the Latin noun cura is transformed into a verb—something that students, faculty, and staff put into action. 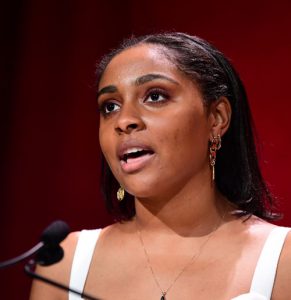 Senior Sydney Veazie thanked guests on behalf of all the Founder’s Scholars.

“[Cura Personalis] becomes an active call, a mission statement, and a defining feature of this University to care for the students who call it home—to attend to us and to our needs,” said Veazie, a double major in international political economy and classical civilization. “Each student can expect personalized care, personalized attention during our time here.”

Veazie, a Fordham tour guide who currently volunteers as a team lead for the Fordham chapter of Consult Your Community and at Belmont High School, said she plans to take the lessons of cura personalis that she learned at Fordham and carry them forward.

“I’ll be going to law school in the fall of 2022, and I eventually hope to work in government and politics and infuse cura into everything I do,” she said.

Veazie said that none of this would have been possible for her or her fellow Founder’s Scholars without the support of those in attendance.

“I cannot stress enough how important this kind of investment is,” she said. “Fordham’s emphasis on cura personalis yields a student body, a community, that itches to pay forward the lessons, the care, and the holistic development we’ve received during our time here.”

Founder’s Scholars from the Class of 2022

Thomas Reuter, a senior at Fordham College at Rose Hill and United Student Government president, served as student MC for the second half of the program. He said the campaign will help ensure that all students feel at home at Fordham and that they’re able to take advantage of the opportunities the University offers.

“This campaign will invest in what we love most about Fordham…its student-centered Jesuit, Catholic education that nurtures the whole person,” he said. “This campaign will renew and enhance our distinctive educational experience that has transformed lives since Fordham was founded in 1841.”

Father McShane expressed gratitude to the evening’s honorees for their efforts to support Fordham’s mission and its students.

“You are extraordinary … you are generous with your time, treasure, and talent … and you stand as exemplars of the renewal of the University in its identity and mission,” he said.

Manny Chirico, a titan of the fashion industry, is the longtime chairman and CEO of PVH Corp., the world’s second-largest apparel company; he plans to retire next month. Chirico served as the company’s CEO beginning in 2006 and as its board chairman since 2007. He currently serves on the boards of Montefiore Medical Center and Save the Children, while Joanne serves as the vice president of the Parish Council at Immaculate Conception Church in Tuckahoe, New York, and is on the board of Montfort Academy. 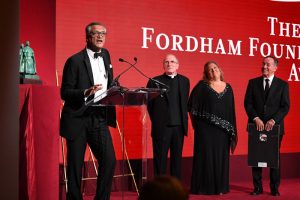 Manny Chirico with his wife, Joanne; Father McShane; and Bob Daleo, chair of Fordham’s Board of Trustees (Watch his speech here.)

Manny, who is also a Fordham trustee, recalled that when he was a senior at Fordham, he took a philosophy class with a Jesuit professor who quoted St. Ignatius Loyola: “Go forth and set the world on fire.”

“I really like that quote, it sounded like something Vince Lombardi would say just before he sent his team out to play in the Super Bowl,” Chirico said. “I had no idea what it meant, but I wrote it down in my notebook.”

Chirico said that he asked the priest what this quote actually meant.

“In typical Jesuit fashion, he said to me, ‘Young man, that’s what you need to figure out,’” he said. “So for the last 40 years, I’ve been trying to figure out what it means to go forth and set the world on fire—I’m still working on it—but I do realize that there is no formula and no set answer. It’s a challenge to make a difference in the small things we do every day.” 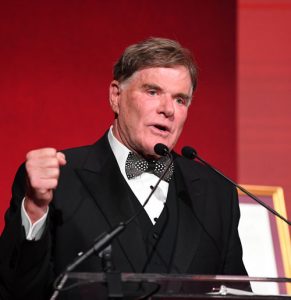 Joe Moglia has combined his love of finance and football throughout his life, working as a championship-winning defensive coordinator at Dartmouth before joining the MBA training program at Merrill Lynch and eventually becoming CEO and chairman of TD Ameritrade, a post he held for more than 24 years, before returning to football as the head coach at Coastal Carolina University. Moglia currently serves as the chair of athletics at Coastal Carolina and board chairman of Fundamental Global Investors and Capital Wealth Advisors.

When he was a senior at Fordham, Moglia took a job coaching at Archmere Academy in Claymont, Delaware, and said that he wanted to provide his players with something more than just a desire to win.

“How do you lay the foundation upon which those boys become men?” he said.

“We created a philosophy that said, ‘A real man, a real woman, a real leader, stands on their own two feet, takes responsibility for themselves, always treats others with dignity and respect, and deals with the consequences of their actions,” he said.

Moglia said that this mindset and philosophy came from Fordham.

“This is a university for others, that loves others, so for me, for whatever I may have accomplished in my life, at the end of the day I’m so incredibly proud to be part of Fordham … and hopefully as I go forward, I continue to make Fordham proud,” he said.

The Chiricos and Moglia were originally supposed to be honored in 2020, but that Founder’s Dinner was canceled due to the pandemic. They were also recognized earlier this year at a virtual toast for scholars and honorees.

The night also featured several performances: Tyler Tagliaferro, a 2017 graduate of the Fordham College at Lincoln Center, played the bagpipes as guests walked in; the Young People’s Chorus of New York City performed; Jesira Rodriguez, a Fordham College at Lincoln Center senior and a Founder’s Scholar, sang the national anthem; and the Fordham Ramblers closed the evening with an a cappella rendition of “The Ram,” Fordham’s fight song.

Father McShane called on those in attendance to honor the members of the Fordham community who preceded them by investing in and supporting current students.

“You were formed by and now possess the intangibles that make for Fordham’s greatness, and that distinguish Fordham from other universities,” he said. “You are men and women for others. You are men and women of character, grit, determination, integrity, expansiveness of heart, and restlessness of spirit. And so, I turn to you to enable Fordham to make the kind of rich transformative experience that you received here available to your younger brothers and sisters.”