The venue may have been new, but it was the same steadfast Fordham spirit that rallied the crowd at the 16th annual Fordham Founder’s Dinner, which raised $2.4 million and celebrated the official launch of Faith & Hope | The Campaign for Financial Aid. Through the campaign, announced during Fordham’s 175th anniversary year, the University aims to raise $175 million.

Held for the first time at Cipriani Wall Street, Fordham’s biggest fundraising event of the year honored two of the University’s great champions and 30 Founder’s Scholars—recipients of the Fordham Founder’s Undergraduate Scholarship.

As Joseph M. McShane, S.J., president of Fordham, welcomed the evening’s 1,100 guests, he directed their attention to a video message recorded by Jeopardy! host Alex Trebek, a Fordham parent and benefactor. Trebek offered this “Final Jeopardy!” clue in the category 19-Letter Words: “Fordham University is celebrating 175 years, a period of time known as this.” The correct response? “What is a dodransbicentennial?”

Father McShane thanked guests for their “astounding generosity” at Fordham’s Dodransbicentennial Founder’s dinner, telling them that their support of scholarships and financial aid “opens up a world of near-infinite possibility for these exceptional young women and men.” 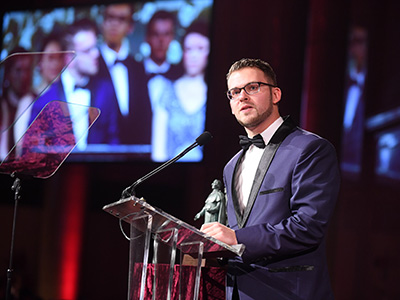 Sal Cocchiaro speaks on behalf of all the Founder’s Scholars

Speaking on behalf of his fellow Founder’s Scholars, Sal Cocchiaro, a December 2016 graduate of the Gabelli School of Business, praised Fordham for encouraging students to examine their conscience—a conscience, he said, that “pains us when we see injustice, discrimination, hatred, and hopelessness. A conscience that reminds us that we are at our best when we foster equality, inclusion, and love for one another.” (Watch Cocchiaro’s full speech below.)

Cocchiaro told guests that by supporting Founder’s scholarships, they have “relieved a great burden, and have allowed us to focus our time and energy on making this world a greater place.” And he announced his own aspirations: “It is my dream to one day serve as the mayor of this great city of New York,” he said to loud applause, “and I am just truly blessed to be here tonight and have this opportunity to share that dream with all of you.” 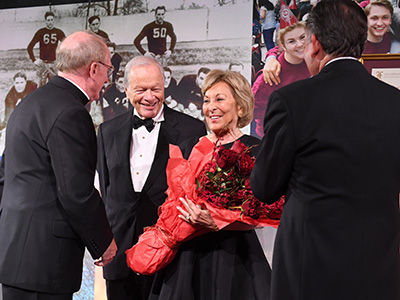 Carolyn Dursi Cunniffe receiving the Founder’s Award with her husband, Mo Cunniffe, by her side

“What a wonderful introduction that turned out to be,” she said, noting that she and her husband have much in common, including the fact that they are both Fordham alumni who were scholarship recipients.

“This community of Fordham is very special. It has the power to instantly transform us from strangers to friends—whether we meet one another by sheer chance, at a Founder’s dinner, an alumni gathering, or simply a blind date,” said Cunniffe, a Fordham trustee and co-chair of the Faith & Hope campaign. She earned three degrees at Fordham, including a doctorate in French literature, and went on to become a successful executive in the cosmetics industry and in executive search.

“Mo and I are both very proud of our Jesuit education and what it has enabled us each to do in our lives. And most importantly, we are grateful for how it guides us to contribute to others,” she said.

Carolyn and Mo, a 2010 Founder’s Award recipient, have been generous benefactors of Fordham. In 2016, the couple made a $20 million gift to the University—the second largest in its history—to establish the Maurice and Carolyn Cunniffe Presidential Scholars Program.

Also receiving the Founder’s Award was Stephen J. McGuinness, GABELLI ’82,’91, a former vice president at Citicorp, vice president of global operations at Twitter, and partner at Goldman Sachs, where he championed diversity through his involvement with a college preparatory program. Before he held any of those roles, he was a kid from the Bronx. 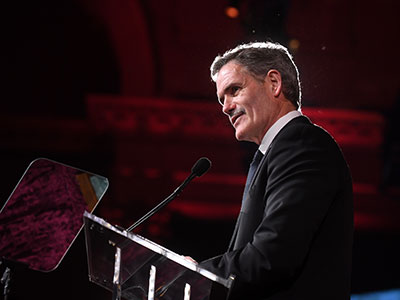 “Mom and Dad came over from Ireland in the mid-1950s, got married, settled in the Fordham section of the Bronx, and raised five children,” he said. “We were a very close family, and not just because the seven of us shared a two-bedroom basement apartment.” McGuinness said visits to Fordham’s campus offered a way for his mom to “get the kids off the block.” Years later, McGuinness, now a Fordham trustee, worked in the registrar’s office as a undergraduate business student. He named several Fordham staff members who were “very, very kind to me and had an influence on me for a lot of things that I ended up doing in my life.” (Watch the full speech by Stephen McGuinness here.)

$100 Million Raised for Faith & Hope | The Campaign for Financial Aid

Founder’s Scholars Genie Hughes and Christopher Wilson took the stage to announce the Faith & Hope campaign, noting that as they spoke, the lights on the Empire State Building were shining maroon in celebration of Fordham’s Dodransbicentennial.

“In honor of our 175th anniversary,” Hughes said, “this campaign is committed to raising $175 million to make a Fordham education more affordable to the best and brightest students.”

Wilson added, “Your generosity will help Fordham advance its noble mission and ensure that the long maroon line will continue to include the sons and daughters of every class, race, and creed.”

Returning to the stage to reflect on Fordham’s past, present, and future, Father McShane noted that from its humble beginnings as St. John’s College, founded in 1841, the University has seen more than its share of challenges. “Through it all, we have prevailed,” he said.

“We are no longer a school of six students on a rural campus of beautiful Westchester. We are now an institution with nine schools, over 15,000 students, three  campuses in the metropolitan area, and international outposts in London, Beijing, and Pretoria.” 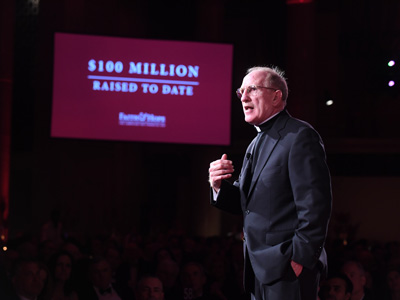 Father McShane thanked guests for what they have contributed to Faith & Hope | The Campaign for Financial Aid to date. “I’m very happy, proud, and deeply grateful to announce that … you have already given $100 million toward the $175 million goal,” he said, as the number flashed on the big screen behind him. He asked that all in attendance continue to support Fordham and “become part of what is a story of true greatness.”

Watch the video for Faith & Hope | The Campaign for Financial Aid.