skip to main content
Return to Fordham University
You are at:Home»Editor's Picks»Founder’s Awards Dinner Raises $2.6 Million for Scholarships
Senior Robin Ayers thanked attendees at the Fordham Founder’s Awards Dinner.
The setting of the revelry was the Waldorf Astoria’s grand ballroom in Midtown, but the Bronx’s hippest denizens would have cheered as well, as March 14 was a night for records at Fordham.

– $2.6 million raised for the Founder’s Undergraduate Scholarship Fund, the most ever.
– 22 Founders Scholars, eight more than the previous year.
– a record-breaking 1,100 attendees at the dinner.

Speaking for her fellow scholars, Robyn Ayers, a Fordham College at Lincoln Center senior majoring in dance and philosophy, thanked attendees for making it possible for the scholars to get a Fordham education. She said that on the day she got the call informing her she would receive the scholarship she was shopping for a headset so she could Skype with her family in Kansas.

“I’m not one for public spectacles, but I don’t mind telling you that I sat down in the middle of Best Buy and started crying,” she said. “That phone call changed my life. Instead of having to drop out or sacrifice academic commitment for [working] multiple jobs, I was able to focus on becoming the most authentic version of myself.” 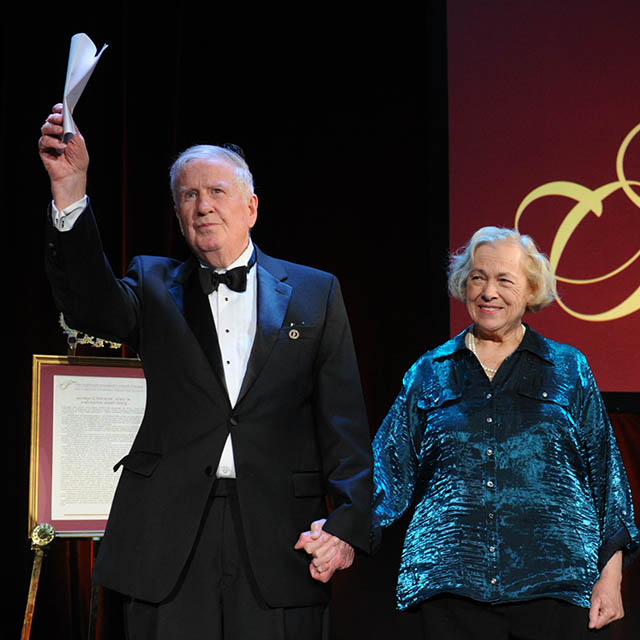 The University presented three families with Founder’s Awards: John and Emalie Feerick, Brian and Kathleen MacLean, and George and Marie Doty, the latter of whom were honored posthumously.

John said he and Emalie were accepting the award on behalf of their parents: his hailed from County Cork, Ireland, and instilled in their children the importance of education even though they did not have one; hers encouraged them to serve others.

John also thanked Emalie onstage, saying her “suggestions, ideas, and encouragement have been reflected in all of my writings, tributes, and speeches, and all my life’s work.” Emalie helped him write From Failing Hands: The Story of Presidential Succession (Fordham University Press, 1965). The book details his involvement in crafting the 25th amendment to the U.S. Constitution. 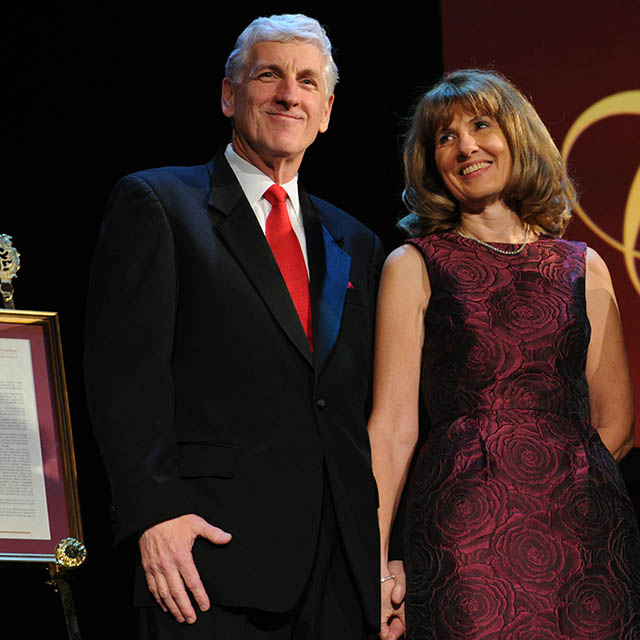 Founder’s Award recipients Brian and Kathleen MacLean met their freshman year at Fordham and graduated together from Fordham College at Rose Hill in 1975. Brian is a member of Fordham’s Board of Trustees and a former chair of the University’s President’s Council. Their son, Thomas, attended the Gabelli School.

The couple has supported Fordham through scholarship funds and through the Fordham Housing Fund, which provides assistance to commuter students so they can live on campus. Kathleen said the couple’s interest in programs like these stem from recognition of how fortunate they are both to have found each other and to be able to contribute philanthropically.

“Talking to these [housing fund] recipients and seeing the impact of how such a seemingly simple thing as living on campus was expanding their idea of what was possible for themselves was empowering to me, energizing, a glimpse into someone else’s future,” she said.

Brian thanked his co-workers at Travelers Insurance who were in attendance. He also gave a shout-out to the Fordham alumni whose 1969 performance on national television’s GE College Bowl convinced Kathleen to attend Fordham in the first place. “Without you, Kathy may have never made her way to the Bronx, and I may have missed out on the single most valuable thing I took away from Fordham,” he said.

The late George Doty, FCRH ’38, and his wife Marie, were hailed as stalwarts of the University through the years.

George, a managing partner at Goldman Sachs, was a Fordham Trustee Emeritus and was one of the University’s most consistent donors, prompting the University to name its donor loyalty society after him. Among the couple’s major gifts to Fordham were a generous donation to renovate the University Church, the establishment of the Marie Ward Doty University Chair in Psychology, and the creation of the Dr. M. J. Werthman Memorial Endowed Scholarship.

Their son Bill Doty said that his father, who died in 2012, was the kind of man who was so devoted to Fordham he would have thanked everyone in attendance in person. 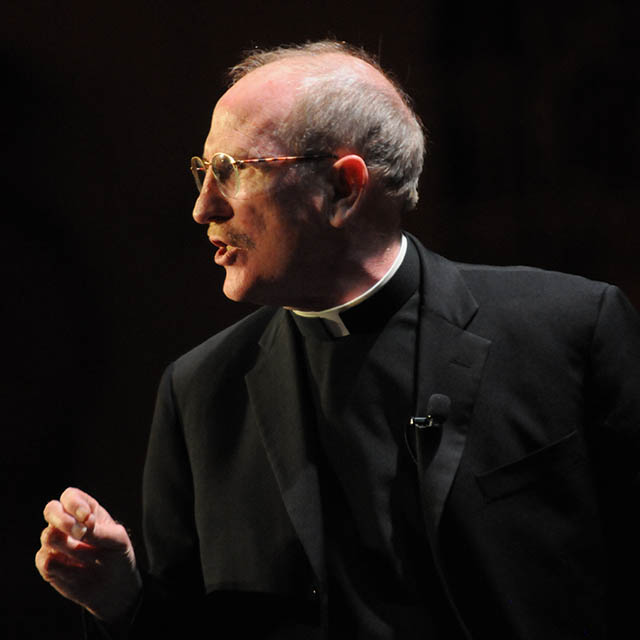 He also noted that his mother Marie, who was married to George for 63 years, had a huge impact on their focus on religious causes.

“It was mom’s devotion to God and the church and her belief that faith plays a big role in one’s life that provided the support for renovations of places of worship, including the amazing Fordham chapel,” he said.

Even though Joseph M. McShane, SJ, president of Fordham, never attended the University, he said he felt as if he had gotten a full scholarship here. He said he absorbed the values of Fordham as a young boy from his father, who was a member of the Class of 1932.