skip to main content
Return to Fordham University
You are at:Home»Inside Fordham»FordhamScience: What We Talk About When We Talk About Ticks 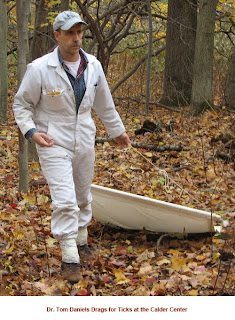 Eight. That’s the magic number. This weekend the Tick Index for Westchester County and the surrounding area is 8—so if you’re out in the woods, or even your yard, you have a moderately high risk of being bitten by a tick. To be specific, a blacklegged tick, also called the deer tick (and in some parts of the country, the bear tick). And if you’re bitten, and don’t remove the tick very quickly, you stand a pretty good chance of contracting Lyme Disease.

So what does the Tick Index number mean? Several times a week, Thomas J. Daniels, Ph.D., Fordham associate research scientist and co-director of the Calder Center’s Vector Ecology Laboratory, takes drag samples at Calder. He and colleague Rich Falco, Ph.D., a medical entomologist with the New York State Department of Health, use a one-meter square piece of while corduroy attached to a wooden bar to go hunting ticks.

“We drag the fabric over a known distance—usually ten or twenty meters—then turn it over and start counting ticks,” Daniels says. “The ticks are host seeking: they don’t care if it’s me or a square of fabric. We know the size of the drag and the distance, so it’s easy to come up with a mean number of ticks per square meter.”