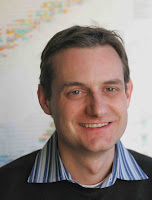 In a small laboratory in John Mulcahy Hall, Jon Friedrich and Julianne Troiano have opened a window that looks 4.5 billion years into the past. That window is Almahata Sitta: fragments of a rare, carbon-rich type of meteorite called an ureilite deposited in northern Sudan in 2008, when asteroid 2008 TC3 slammed into Earth’s atmosphere and exploded 37 kilometers above the ground.

Friedrich is an assistant professor of chemistry at Fordham; Troiano is a senior at Rose Hill, majoring in chemistry. The window they’ve opened doesn’t look like much—a tiny speck of material that resembles a black breadcrumb—but the insights gleaned from it have already changed the way we think about the composition of matter in the early solar system.

“The great thing about is that it allows us to see what the early solar system was like without having to back-calculate the effect of terrestrial contamination,” Friedrich says. “There’s a chemical signature that occurs in most ureilites known to date… and that chemical signature was not present in Almahata Sitta. We were actually able to say that okay, Almahatta Sitta does not contain that signature, so other meteorites of this class maybe actually somewhat contaminated.” 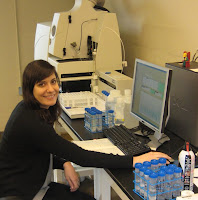 Friedrich says the chemical composition of Almahata Sitta is intriguing because it’s so atypical (the technical word for “weird”). The most common type of asteroid in the asteroid belt (a vast collection of small objects between the orbits of Mars and Jupiter) is something called an s-type asteroid. If you held a part of one in your hand, it would be heaver than a ureilite of the same size because the s-type would probably about 10 to 15 percent metal—particularly nickel iron, or nickel metal, and it would be gray in color.

“We have the samples, and they’re pretty small—probably the size of a pinky nail,” Troiano says. We grind the samples so it’s easier to dissolve them, then we mix them with nitric acid and hydrofluoric acid and we put them in a microwave digestion system that heats them up and increases the pressure so the samples can dissolve in the acid. When they dry down and they sort of just look like goo.”

The goo is mixed into a 50 milliliter solution and put into a mass spectrometer, which tells the researchers which elements are present and in what amounts. The results are then fed into Excel spreadsheets for analysis.

“One of the things that came out of all of the work that’s been done by people all around the world is that we know the 2008 TC3 asteroid that produced the Almahata Sitta meteorite was a very un-homogenous chunk of rock,” Friedrich says. “Julianne and I focused on the pieces that were ureilitic in nature, which is the majority of Almahata Sitta and the TC3 asteroid. But what we did find was that if you’re a geologist and you had an asteroid and you grabbed pieces of rock, they’d look a little different.”

He says it seems that different pieces of the asteroid did have different internal chemistry to it to some extent. Whether the different parts were formed under different temperatures might be one reason why this is so.

Analysis of Almahata Sitta tells us that not everything in the asteroid belt is of the same composition, which has implications for how these objects should be dealt with should they be nudged into an Earth-crossing orbit. Should an object of sufficient size be on a collision course with Earth, the results could be catastrophic. One of the leading suspects, if not the leading suspect, in the extinction of the dinosaurs is the Chicxulub asteroid, a chunk of rock at least 10 kilometers across that crashed into the Yucatan Peninsula 65 million years ago. The impact, at a speed at least 20 times greater than that of a rifle bullet, left a crater 180 kilometers across. It would have caused an enormous shock wave, global tidal waves, a tremendous earthquake, hurricane winds, and trillions of tons of debris ejected into the atmosphere. The forests of the Americas would have been set ablaze. The resulting smoke and particulate debris would have created months of darkness and cooler temperatures globally, and concentrated nitric acid rains worldwide.

Though so-called “slate wiper” impacts are rare (perhaps once every hundred million years), they are a real threat. NASA thinks so, and has created the Near Earth Object Program to track possible impactors and devise defenses, most likely nudging those objects out of their Earth-crossing orbits long before they reach us. How the objects get nudged away depends on their composition.

“One of the things that we’re learning is that asteroids aren’t necessarily big, giant rocks in the sky that are one big piece,” Friedrich says. They can be made up of lots of little pieces sort of weakly held together…and the structure you know is something that’s typically strong, a big piece versus something that is weakly put together in sort of a boulder pile. The official term is rubble pile—that’s what people call it in the asteroidal community. Trying to destroy or alter the course of asteroids with these two different properties is going to take different tactics.”

Friedrich has published on the composition of Almahata Sitta before, including in the March 2009 issue of Nature. We wrote about his work at the time (see “Fordham Scientist Helps Tie Chemical Makeup of Meteorite to Parent Asteroid”). He and Troiano have also published several papers on the meteorite, in the peer-reviewed journals Meteoritics &amp; Planetary Science and Geochimica et Cosmochimica Acta—a somewhat unusual honor for an undergraduate researcher.

Troiano, a Clare Booth Luce Scholar, has made the Dean’s List for the last two years. She is a cheerleader, a member of the Expressions Dance Alliance, and a member of both the American Chemical Society and American Geophysical Union. Troiano says she was already interested in chemistry in high school, and that two great teachers brought her further along that path.

“I came into Fordham as a chemistry major already,” she says. “From there, I guess, once you make it past sophomore year—kind of breaking point—if you make it past that, you can make it through the rest of the major.”

Friedrich’s research is supported in part by a Fordham Faculty Research Grant. Troiano’s summer research was supported by her Clare Boothe Luce Scholarship.