skip to main content
Return to Fordham University
You are at:Home»Inside Fordham»FordhamScience: Science in a Jar 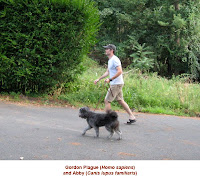 When asked where he gets his ideas, science fiction writer Harlan Ellison famously answers “Schenectady.” In a published interview he elaborates, “…there is no answer to this query. At least neither Plato nor Socrates nor Shakespeare could make the codification.”

Gordon Plague, an evolutionary biologist at the Louis Calder Center, studies the evolution of bacteria in insects, among other things. Ideas are his stock in trade and he, like Ellison, can rarely point to their genesis. Except for the weevils.

An assistant professor of biological sciences, Plague raises maize weevils (Sitophilus zeamais) and rice weevils (Sitophilus oryzae) in the lab at Calder to study their symbiotic bacteria. “They’re easy to raise,” Plague says. “You can just grow them in jars with some corn or rice in an incubator in the lab.” (The incubator is used to control humidity and optimize growth, according to Plague.)

Weevils, in case you’re wondering, are insects that primarily feed on plant material. Maize weevils and rice weevils spend their larval and pupal stages within a kernel of stored grain, living off the endosperm—the starchy portion from which the seed draws nutrition (analogous to the “white” of a chicken’s egg). The weevils need the bacteria to break down the starches into nutrients the weevils can use, and the bacteria can only live inside the weevils’ specialized host cells, called bacteriomes. 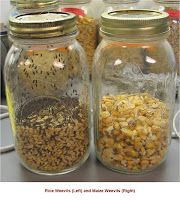 Periodically, Plague and his students need to remove some weevil larvae (the sub-adult stage of the insect) from a jar to harvest bacteria from them. When they did so, Plague says, they noticed that the adult rice weevils seem to climb the walls of the jar much more vigorously than adult maize weevils after the larvae had been removed.

“A lot of times you can’t pinpoint exactly what sparked a particular question or line of research,” Plague says. “I do a lot of my best thinking when I’m walking my dog, and I can let my mind wander. But in this case, we saw that the rice weevils were climbing like crazy after the jar had been disturbed, much more so than the maize weevils. We wondered why that was.”

Enter Gaelle Voltaire, an undergraduate student in biological sciences who needed a research project. (Before we get on with the science portion of our program, let us give thanks for an article that includes the surnames “Plague” and “Voltaire.”) Plague turned Voltaire loose on the climbing weevils. Job one was to confirm that they were seeing what they thought they were seeing: that the rice weevils were indeed more vigorous climbers. Or in the language of their paper, “Our objective was to quantify this climbing behavior in both species under a variety of environmental conditions to assess whether our anecdotal observations were correct.”

Read the paper by Plague, Voltaire and lab members Bridget E. Walsh and Kevin M. Dougherty: “Rice Weevils and Maize Weevils (Coleoptera: Curculionidae) Respond Differently to Disturbance of Stored Grain,” published in the Annals of the Entomological Society of America, Vol. 103, No. 4, 2010.

It turns out that careful observation confirmed what Plague and his students had noticed in the Calder lab: the two species exhibited markedly different climbing behaviors after the jars were disturbed, with the rice weevils climbing significantly more than maize weevils under a variety of environmental conditions..

We know what you’re thinking: “Some bugs in a jar on a countertop in Westchester climbed more than some other bugs in other jars? Really? This is why I majored in English!”

But measuring the climbing rates of two species of insects isn’t an end unto itself. As a biologist, Plague sees this behavior shedding light on the deep evolutionary history not just of weevils, but of human beings. (There are also the practical considerations that his findings may have for pest control.)

It turns out a lot of insects that live and feed on stored grain exhibit this climbing behavior (“negative geotaxis” in the jargon) when the store is disturbed, and probably evolved many times in different species. Because both the rice and maize weevils exhibit the behavior, it is likely that it existed in their last common ancestor, 20 million years ago (at least 15 million years before the split between the chimpanzee and human lines). So weevils very likely infested the stored seeds and nuts of rodents and birds before humans started growing and storing surplus grain.

What would be adaptive (in other words, what would confer an advantage in leaving behind offspring) about this climbing behavior?

“These weevils have a 30-day lifecycle from egg to adult,” Plague says. “When the caches of rodents and birds were disturbed, it was probably a signal that the owner was coming home. That poses a risk that the weevil might be eaten, or at least that the cache was going away. The weevils would have to get away so they could lay eggs in another cache.”

“Complex behaviors are primarily maintained because they provide a survival or reproductive benefit to the animal,” Plague says. “Therefore, taking an evolutionary approach to studying animal behavior can shed insight into an animal’s biology, both past and present. This project not only did that, but the results also potentially have implications for controlling these worldwide stored grain pests. And also significantly, it was a pretty simple experiment that gave students experience with the complete scientific process, from the generation of a question to the publication of the paper.”