skip to main content
Return to Fordham University
You are at:Home»Editor's Picks»Fordham’s New London Centre Is Central to University’s International Strategy
The Fordham team on site at the new London Centre. Photos by Mark Lewis
After a nearly eight-year association with Heythrop College in one of London’s more cultivated neighborhoods, Fordham’s London Centre will strike out on its own in a newly renovated building in Clerkenwell, a centrally-located area known for its gastropubs, tech startups, and repurposed warehouses. 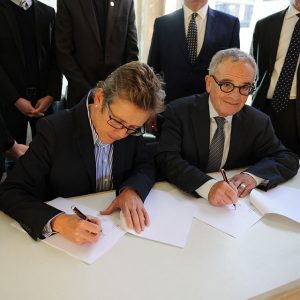 “If Fordham aspires to be a 21st-century University, it must also be an international university,” said Joseph M. McShane, S.J., president of Fordham. “The Jesuits’ Heythrop operated for many years in the Catholic-friendly North and moved to London after Vatican II. Fordham is building on that tradition in a way that serves our students and the world. Our expanded London Centre will help us better educate more students in the Jesuit mold.”

The move will put Fordham’s London Centre in a much more active and student-friendly neighborhood. Clerkenwell, a former industrial neighborhood in the center of London, gained a reputation in the mid-1990s as design and tech firms began to make the area their home. The Centre will be within walking distance to both the city’s bustling financial district and the West End theaters. It will be a stone’s throw from the British Museum and St. Pancras International Railway Station—making Paris less than three hours away by train. There are many highly regarded universities in close proximity with which Fordham will explore partnerships to provide students with extracurricular opportunities, joint initiatives, and wide access to facilities. 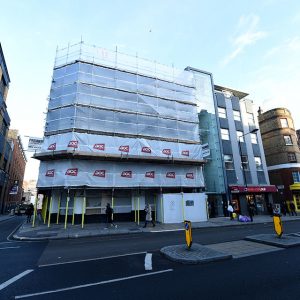 “With the signing of this long-term lease, Fordham reasserts its commitment to international education, and to the University’s presence in London,” said Stephen Freedman, Ph.D., provost of the University. “London will not merely be a campus for Fordham students to study away, but a destination for students from other universities across Europe and Asia, and a hub of global scholarship. London, and our programs in Beijing and Pretoria, are templates for expanding the Fordham mission outside of New York City, and outside of the United States.”

The new facility is set to open in the fall of 2018, and at 17,000 square feet of space, there will be plenty of room to expand programs in business and theatre, and add new offerings in the arts and sciences. The new Centre’s four floors will house arts and sciences, theater, and business courses up to the graduate level, and will accommodate the growing popularity of the study away program. The ground floor will consist of a shared student space with a learning center and a small library. The second floor of the new building will be devoted to the London Dramatic Academy with two large performance spaces, and the remaining two floors will hold seven classrooms, a conference room, faculty offices, and group study rooms. The entire ensemble will be topped with a roof terrace overlooking the lively neighborhood. 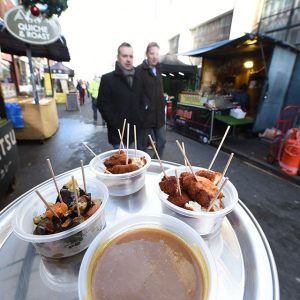 The Leather Lane Market, just across from the new Centre, fills daily with a rotating roster of food vendors.

The provost said the Centre’s new location will also broaden Fordham’s opportunities for international students, attract partnerships with institutions in Europe and Asia, engage alumni—including the more than 300 Fordham graduates living and working in the United Kingdom—and provide a forum for Fordham scholars to share their expertise with European peers and with the British public. The Centre will also help Fordham students from the United States to broaden their perspectives, and think globally, by exposing them to a world capital other than New York.

Fordham inherited the London Centre from Marymount College, with the prestigious London Dramatic Academy as its cornerstone. The academy class size is capped and operates as a conservatory. Its course-specific needs—from springboard floors to small rooms for vocal coaching—will be met in the new designs, said Freedman.

While the London Dramatic Academy has continued to flourish, so too have programs in the Gabelli School of Business and the London Liberal Arts program. The Graduate School of Social Service has offered a summer Human Rights Symposium in London, and other graduate and professional schools have integrated London into their programs. The new space and its year-round operation provides opportunities for more intentional planning and allows the University to serve the needs of each of its constituencies.

“Space really does matter, and this is the perfect learning environment,” said Richard Salmi, S.J., head of the London Centre. “It is significant that we will have our own space, our own campus with the Fordham name on it. The new Centre will become a way for our students to engage with London and for London to engage with us.”

“London is a hub, Father Salmi said,” and we already have faculty, students, and alumni passing through the city every day. Now they have somewhere to call home.”

Fordham philosophy students toured the cloisters of Westminster Abbey this past summer. (Photo by Afshin Feiz)