skip to main content
Return to Fordham University
You are at:Home»University News»Fordham’s Ayesha Akhtar Named ‘Rising Star’ by PRNEWS
Ayesha Akhtar, with her son Aidhan. Photo by Taylor Ha
Working full time, having a baby, and completing her MBA were just a few things that Ayesha ​​Akhtar accomplished this past year in the midst of the COVID-19 pandemic. As assistant director of communications at Fordham, Akhtar secures key media placements for Fordham faculty, showcasing their expertise in local and national outlets.

Her hard work and success were recognized by PR News, which named Akhtar a “Rising Star for 2021.” The Rising Star awards—presented at a July 28 virtual gala—celebrate those who are “in the early stages of their careers but have already demonstrated remarkable work.” 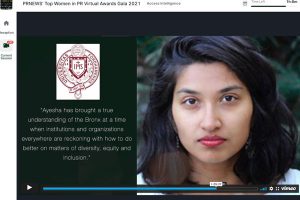 Ayesha Akhtar is recognized during an online gala by PRNews. PRNews named Akhtar a “Rising Star” this year.

Akhtar said it was great to earn this recognition after a year that has been so challenging, but also gratifying.

“Going to graduate school [to get an Executive MBA], becoming a mother, and working full time during the pandemic was hard,” she said. “I don’t want to glorify this or recommend this route to everyone. However, there’s nothing that lights a fire under your butt as having a little one to take care of. Becoming a mother gave me so much focus and purpose.”

Gina Vergel, Fordham’s senior director of communications, said that Akhtar has been essential in the department’s efforts of diversity, equity, and inclusion, not just internally, but also in partnership with the communities where Fordham is located.

“It’s not just about having diversity here on this floor, or on our board, or among our students, but it’s also about the way we interact with the Bronx and with other parts of New York City,” Vergel said. “And though we’ve always talked about it, having Ayesha here has really given us a complete new understanding about it.”

Vergel, who was recognized as a ‘Top Woman’ in PR by PRNews last year, said that Akhtar’s deep knowledge of the Bronx has helped Fordham connect with local media outlets to get the word out about University events and efforts. She’s also kept the communications team informed of things happening in the neighborhood.

“All of that helps us as a department and then as a university at large understand the area in which our university campuses are located better,” Vergel said.

Amplifying the Work of Professors and Students

In her role as assistant director of communications, Akhtar’s main responsibilities include getting the University’s story, its professors, and its work covered in the media, as well as following the latest media trends to see where Fordham’s faculty knowledge could be useful.

“I work primarily with professors in order to get their work placed in the media—if somebody is working on a research project that connects to current news, or if somebody is writing a book and wants media attention for that,” she said, “and I also just get our professors’ general expertise out in the news as well.”

Recently, she placed a story in the Christian Science Monitor highlighting the work that Professor Mark Naision and his students have been doing to capture the voices of Bronx residents impacted by the COVID-19 pandemic, known as the Bronx COVID-19 Oral History Project.

“It’s not just the professors—it’s the Fordham story that gets out on the whole,” she said about this piece. “And it’s also not only about Fordham expertise, but it’s also central to what’s happening in the Bronx, which I think was really special.”

Vergel said that one of Akhtar’s biggest strengths is her ability to connect with and work for the local communities, particularly the Bronx. Akhtar played a key part in producing new webpages for undergraduate students that help them connect with their neighborhoods, Vergel said.

Connecting people with the resources of their neighborhoods has been a mission of Akhtar’s. In 2018, she helped found LAAL NYC, a nonprofit that provides assistance to Bengali women living in the Norwood section of the Bronx. Though she stepped down from the nonprofit’s executive leadership after becoming a mom, the organization continues its mission of helping Bengali women with the basics, such as learning English, nutrition, medical care, paying bills and housing.

At Fordham, Ahktar said she wants to continue to work with faculty, especially younger faculty members, to help them become comfortable with media appearances and give them exposure.

“People who just came on, people who are really early on in their careers and want to be in the media and have opinions—I want to know more about them, and I’m really excited to work with them,” she said.

Akhtar said that she wouldn’t have been able to accomplish all she did over the past year without the flexibility and support provided by Vergel and Bob Howe, assistant vice president for communications and special adviser to the president.

“I’m given an enormous amount of trust to do my job. The only way I was able to have a job, complete the MBA, and have a baby is because of flexibility—flexibility in conjunction with having a really good manager who really deeply understood the experience of becoming a mother in today’s workplace. So I think that’s key to my success.”