skip to main content
Return to Fordham University
You are at:Home»Colleges and Schools»Fordham College at Lincoln Center»Fordham Welcomes Most Diverse, Largest Class in History

Fordham welcomed more than 2,800 students to its incoming class on Opening Day, making it the largest class in the University’s history. The Class of 2025 is also the most diverse class Fordham has ever had, with more than 44% domestic students of color and 6.5% international students.

The new Rams hailed from 45 states, 51 countries, and all five boroughs of New York City. More than 600 students in the incoming class are from New York City, including more than 160 from the Bronx—up significantly from last year. The average high school GPA for the class was 3.67.

In his welcoming remarks to families, Joseph M. McShane, S.J., president of Fordham, urged attendees to soak up the momentous nature of the occasion.

“For the students here, today marks the end of adolescence. You’re no longer kids. You’re young adults,” he said, adding that they have the opportunity to outshine their high school selves.

To the parents, he said, Fordham is honored to have been invited to be a part of their students’ lives.

“We will spend ourselves surrounding them with care,” he said during the Aug. 29 festivities.

“You must not get the impression that we’re going to be easy on them though. This is a Jesuit school. We believe that we have to mix rigor and love. We will cherish them and challenge them in equal measure and we will never insult them with low expectations.”

He also strenuously advised students to embrace the town that the University calls home.

“New York is in our DNA. When you come to Fordham, you’re taking on the city as well. The city is our classroom, our laboratory. Whatever you major in, minor in New York,” he said.

At Home in New York City

Many first-year students were already taking that advice, highlighting New York as one of the main reasons they chose Fordham. 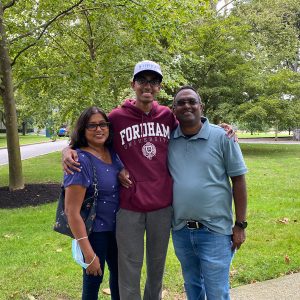 Ryan Howard with his parents, Ryan and Nola

“Fordham was the closest proximity to home, closest proximity to other things—you have [Manhattan], the Bronx, Arthur Avenue,” said Howard, who is from Long Island and will be studying at the Rose Hill campus. “The other schools [I applied to]—you walk 10 minutes away, you’re in the middle of nowhere. That’s one of the things that made Fordham appealing.”

John Perla, an incoming Fordham College at Lincoln Center student from Princeton Junction, New Jersey, was taking in the sights from his room on the north side of McKeon Hall. When he gets free time, one of his first treks will be to Citi Field in Queens to catch a Mets game. Manhattan, though, is what drew him to Fordham. 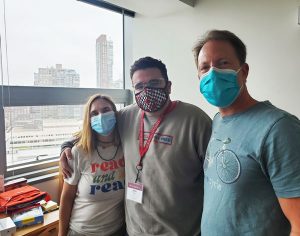 John Perla and his parents

“The Upper West Side is one of the best neighborhoods in the city. When we came here, I just fell in love with it. Honestly, I’m just looking forward to getting back up here tonight and enjoying the view at night,” said Perla, who plans to pursue political science.

Natalie Foo, a first-year Fordham College at Lincoln Center student from California. grew up visiting New York every year, so going to college here was “sort of like a homecoming,” said her dad, Kent Foo. But that wasn’t her only reason for choosing Fordham.

“New York has a lot of possibilities, and that’s why I wanted to come here,” said Foo, who is interested in studying architecture and possibly art history. 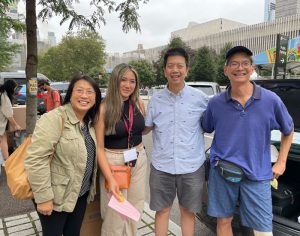 Natalie Foo and her family

“And what better place than New York?” she said, gesturing behind her to the gleaming glass-and-metal skyscraper she will now call home.

Marcelo Pachicano, a first-year Fordham College at Rose Hill student studying biological sciences, said that after growing up in Chicago, he chose Fordham partly because he wanted both a city and a vibrant campus.

“I wanted to stay where things were happening, but I also wanted the campus community,” said Pachiano. 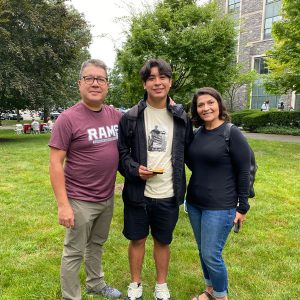 Marcelo Pachicano, with his parents Miguel and Maria

His mother, Maria Pachicano, said that she was glad her son was getting to experience another city.

“And we’re Catholic so I like the fact that he went to a Jesuit school—that didn’t hurt.”

Anton Karabushin, a first-year student at Fordham College at Lincoln Center, said that he plans to study political science on a pre-law track. But he also wants to make sure he has time for his other loves.

“I’ll also be doing a lot of music and theater while here because that’s my other passion,” he said. 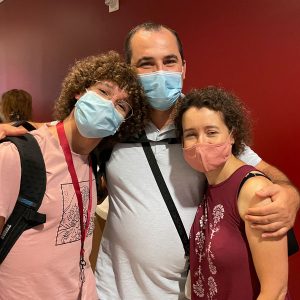 Anton Karabushin and his parents

Karabushin was selected for the “Tony Awards for high school musicals” in Colorado, his home state, for his performance as Frederick in Pirates of Penzance. He has a long list of credits so far, including Rooster in Annie and Shylock in Merchant of Venice. “I’ve been pretty much singing and acting all my life,” he said.

Elise Downing, a first-year student at Fordham College at Lincoln Center, said that she plans to study political science with a fashion minor. She’s looking forward to the fashion opportunities her new city has to offer, such as Fashion Week.

“I’ve always loved New York and I’ve always wanted to move here,” she said. “Fordham is one of the best schools in the area, so I’ve been drawn here from the start.” 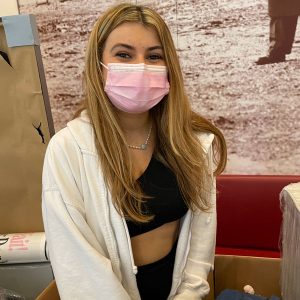 First-year Gabelli School at Rose Hill students Snehsrishti and Gurbax Assie—twins from Mumbai, India, have a few things to get adjusted to, including living in the U.S. and attending school in person again.

“We haven’t been to school since 2019. So it’s our first time again, in an exciting environment,” Snehsrishti said.

Following in the footsteps of their parents, the twins are planning to study entrepreneurship, with Snehsrishti also looking to explore alternative investments and Gurbax hoping to study finance.

“We had a session with [Al Bartosic, head of the Fordham Foundry] … the Foundry really stood out to us,” Snehsrishti said. Both siblings were also impressed with Hughes Hall, the Gabelli School’s home at Rose Hill. 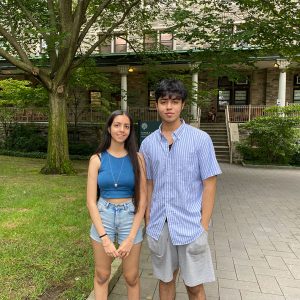 “As soon as I walked into the Gabelli building, the first thing I noticed was the Bloomberg terminals,” Gurbax added. “I’m really excited to go into the investment club, where they give us very big funds to manage.”

Both Snehsrishti and Gurbax have already gotten involved in the Fordham community, thanks to the Global Transitions Program, which serves as an orientation for international students. Both said that they were grateful for the welcoming reception they’ve received from the Fordham community—including those they spoke to before arriving on campus.

“I think what really got me to commit is the upperclassmen—everyone I spoke to was just so nice,” she said.

Even though the impacts of the COVID-19 pandemic are still being felt across the country, one of the things many students said they were looking forward to was being around people again, whether in classes, clubs, or activities, even if precautions have to be in place.

Shehan Hussain, a commuter student from Midwood, Brooklyn, who enrolled in the Gabelli School of Business’ Global Finance and Business Economics program, said that after a year of taking classes remotely, the Opening Day festivities added to his excitement of being able to take classes in person.

“College itself would be a new experience regardless of whether there was a pandemic or not,” he said. “It definitely amplifies the experience that this is the first time I’ll be in school in front of a bunch of people after a long time,” he said.

Angel Ducret, a first-year commuter student at Fordham College at Rose Hill from Manhattan’s Cristo Rey High School, said that he was looking forward to being back in person, even if it meant some adjustments.

“[Being virtual] was very tough, emotionally, mentally, and physically on me. So I feel like coming back in person, it’s going to take a few weeks this semester to kind of get back to it,” he said. “But I think after at least the fall, it’ll just feel like school again.”

Kathleen Hollinger, a first-year Gabelli School student who plans to study finance and computer science, said that she was excited for “just getting a chance to go to school in person again and being with other people in a classroom (and) the social aspects.”

Traveling from Near and Far

Hollinger and her parents Danae and Mike Hollinger were some of the first to arrive on the Rose Hill campus on Sunday, traveling all the way from Seattle. 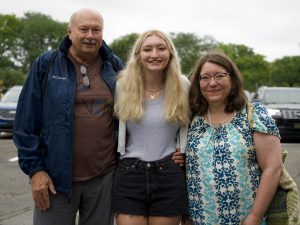 Kathleen with her parents, Mike and Danae

“I really liked that it was a Jesuit school—both my parents went to Jesuit schools—and they had a really good business school program,” she said.

She was excited for the opportunity to live on and explore the East Coast.

“We’ve had a lot of people say, ‘oh the East Coast? Why aren’t you staying on the West Coast?’ I think it’s exciting actually to check out other parts of the world,” her mom Danae said.

Sandy Wong traveled all the way from California to move her only child, Nicole David, a first-year Gabelli School student, onto the Rose Hill campus.

“She’s growing up, she’s on her own—I’m just happy for her,” she said. “As long as you give them a good foundation, I think by the time they’re 18, I just feel comfortable—my kid is growing up, she knows what’s right and what’s wrong.”

Nicole Bennett, a native of Mystic, Connecticut, who enrolled in the Gabelli School Global Finance and Business Economics program, was one of the first to move into Lincoln Center’s McKeon Hall.

Her father grew emotional when he reflected on the day, as Nicole is the oldest of three, and therefore is the first to “fly the nest.”