The spring semester was already gearing up to be one of change for Fordham’s veterans association: it got a new name, a new space, and a new president. But with the COVID-19 outbreak upending lives and routines, the University’s veterans had to deal with a lot more change than they planned for. Students and staff said they are finding efficient and creative ways to adapt, as is their nature.

“Adaptability is a quality that military training instills,” said Matt Butler, director of Military and Veterans Services at Fordham. “You only need to look at the thousands of service members from active duty, reserves, and the national guard who have been called on to support the efforts in New York City over the last two months, including some from our Fordham community.”

Since the pandemic started, Fordham student veterans have held several virtual events, including an Instagram “quarantine pet story” and a First Friday meetup. But most of the events have centered on career preparation, such as an April 17 event Edge4Vets event. The Edge4Vets program, run by the Human Resiliency Institute at the Gabelli School of Business, helps veterans translate military core values into tools for the corporate environment. Attendees had the opportunity to connect with corporate partners at the event, including Pfizer, Federal Reserve Bank of New York, Macquarie Group, and Penske Media Corp. 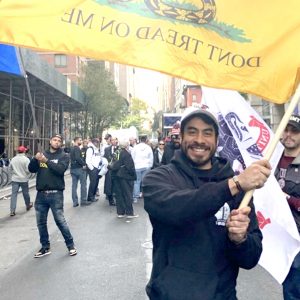 During a breakout session during the event—which was open to all in the Fordham veterans community—Fordham student Matias Ayala, a former sergeant in the Marine Corps, said uninformed civilians often advise veterans to continue service in the police force. But while Ayala may have been an anti-tank missile gunner when he was in the service, he knew that he had also learned critical “soft skills,” such as communication and leadership, that corporate firms are looking for.

“I went to college before the military and I changed my major five times, so that’s one of the big reasons we want to bring these career fairs to the vets, to let them know what’s out there,” said Ayala, a junior in the School of Professional and Continuing Studies (PCS) majoring in information technology and systems programming. He is the new president of the Student Veterans of America at Fordham (SVAF), which helped bring the event and several other programs to Fordham veterans. “There’s just so many organizations that want these soft skills; it’s really a reminder that there’s so much you learn in the military that can’t be taught in schools.”

Formerly known as the Fordham Veterans Association, SVAF’s name change reflects the group’s desire to firmly align with the national umbrella organization they’ve belonged to for 10 years. In addition to the new name and president, the group also opened the Fordham Veteran’s Resource Center at 140 W. 62nd Street, which is now operating online on Mondays and Thursdays from 11 a.m. to 2 p.m. Just like the physical center, vets can “drop-in” without an appointment.

Membership to SVAF has its privileges. For one, the group was kept up to date on SVA’s lobbying efforts in Congress during the first COVID-19 stimulus package. The bill, now law, ensures that veterans’ housing allowances will remain in place through December 2020. The housing allowances vary from city to city, said Butler, and New York’s housing allowance is notoriously higher than most of the country. Butler said that the unaltered distribution of funds allows Fordham student veterans who are already experiencing a transition to civilian life the ability to maintain their newly established roots in the city. In addition, the extension into December entices newly accepted freshmen to consider Fordham despite high rents.

“We all know that the housing distribution rates make our ends meet, without which we wouldn’t be able to be here in New York City,” said Ayala, a native New Yorker from the Soundview section of the Bronx.

Ayala said housing security is an important part of transitioning back to civilian life.

“Even though I do have a family support structure here, I did have a problem with transition,” he said. “I was kind of down and when I found the group it really helped; it was a community that I felt like I belonged to.”

Ayala said he’s only heard of one student veteran at Fordham who left the city during the crisis. That was PCS junior Damaris Gonzalez, SVAF vice president for communications. After quarantining herself for 14 days, she drove down to Florida to be with her family. She soon realized her mistake. She described a jovial, if raucous, atmosphere of kids and grandparents that she’d appreciate at any other time, but as a student taking online classes and completing assignments, it was tough. She was soon on her way back to New York City and another 14 days of quarantine.

“I also work from home for the vet center at Fordham and I basically plan every social event and promote it on @ramvets on Instagram,” she said.

Gonzalez agreed with Ayala that the group provides a stigma-free environment, particularly at the new vet center. But something else began to happen in quarantine she wasn’t expecting. With physical walls removed, veteran students began to reach out to each other more often and at odd hours.

“There’s another stigma that we’re susceptible to being in our own feelings or trying to drown them out alone, and that can be true, but the thing I love about the center is you’re not alone—even if it’s two in the morning,” she said. “Now that we’re all online, I know a least three vets who will be up and I don’t feel like I’m invading that time because I’m up, too.” 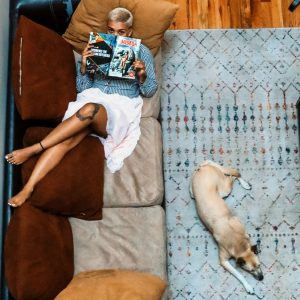 Damaris Gonzalez runs SVAF’s communications with her dog Dany from her home in Brooklyn.

She said it’s been tough for her, as a person who has served her country, to be a student on the sidelines during a national emergency.

“I feel a little useless and a little anxious when there are people volunteering; it kind of sucks because I’m quarantining,” she said, though the former military police officer continues to concentrate on her double major in communication and media studies and visual arts concentration in film. She’s also running a bingo night with prizes planned for First Friday Veteran Meetup on May 1 at 6 p.m. And she’s planning a Netflix and Chill session and trying to muster a workout group.

Ayala said that with most students home from work as well as school, there’s more time available to hold events, so the group has been trying to hold about two a week. This week, in addition to bingo night, the Vets in Tech Employer Meetup will be held on Thursday, April 30, at 6 p.m.

He’s also been keeping up with his friends from the service in less formal ways—something he said has been critical during this time.

“I appreciate more all my marines, we don’t even use a calling community or a social thing, we’re just trying to stay in touch,” he said.