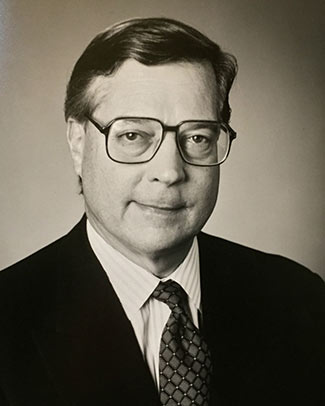 “We have lost one of the great ones today,” said Joseph M. McShane, S.J., president of Fordham. “He was so many things: a thoughtful and highly effective member of the Board of Trustees, a generous benefactor, and a dear friend. He was a man of great love and great integrity, and was singularly devoted to his family and the University. I know the Fordham family joins me in keeping his loved ones in their thoughts and prayers.”

Born in New York City on July 21, 1942, Bepler first encountered the Jesuits after his family moved to Seattle, Washington and joined a Jesuit parish, where he became an altar boy. That spiritual introduction grew into a lifelong intellectual relationship with the Jesuits that began at Seattle Preparatory School and culminated in a return to New York and enrollment at Fordham.

Two uncles and an elder brother, Peter, preceded him at the Rose Hill campus.

“They ask why on the important questions,” he once said of the Jesuits. “They’re willing to ask why, even if they don’t get the answers they want.”

At Fordham, Bepler worked six days a week, played intramural sports, and sang in the glee club, all while studying Greek and Latin. He graduated with a bachelor’s degree in classics.

Funeral Services will be held:

Charitable donations in Stephen Bepler’s name may be made to:

Bepler’s career as an investment professional spanned nearly five decades. After earning his M.B.A. at Columbia University School of Business in 1966, he began his career at Brown Brothers Harriman & Co. in the investment advisory department. He joined Capital Group in 1972 and remained there for four decades, rising to senior vice president and director at the company’s Capital Research Global Investors division.

He also held positions as an equity portfolio manager at American Funds Washington Mutual Investors Fund, Capital World Growth and Income Fund, and EuroPacific Growth Fund. He and his EuroPacific Growth team were twice (1999 and 2009) recognized by Morningstar’s “Fund Manager of the Year” Awards in the international stock arena. In addition to his financial work, Bepler taught a course at Stanford University for more than a decade.

“Throughout his 40-plus year career at Capital Group, Steve embodied our core values. He operated with the highest integrity, was a collaborative partner with his colleagues, and made all decisions with the investor in mind. I speak on behalf of many of our long-tenured colleagues and retirees, when I say that he will be missed,” said Tim Armour, chairman and chief executive officer of Capital Group.

“Steve Bepler was a trusted colleague and a very astute businessman,” said Robert Daleo, GABELLI ’72, chairman of the Fordham Board of Trustees. “My heart goes out to Kim and his family on their great loss. Steve was generous with his time and gifts, and both genial and straightforward in his relations with his colleagues on the Board. I will miss his wisdom and his good company.”

Bepler and his wife, Kim, were married 14 years ago. The couple gave generously to a variety of educational institutions and causes, including the Archdiocese of New York, New York Nativity Schools, and Cristo Rey New York High School in Harlem. Bepler was also a benefactor and board member of the Forman School in Litchfield, Connecticut, Barnard College, the Inner-City Foundation, the Washington Theological Union in Washington, D.C., and Fairfield University in Connecticut. Bepler had struck up a friendship with Fairfield’s president, Jeffrey von Arx, S.J., when Father von Arx was the dean of Fordham College at Rose Hill.

Bepler held several leadership positions during his tenure on Fordham’s Board of Trustees, including chair of the Student Affairs Committee, vice chair of the Mission and Identity Committee, and member of the Executive Committee. He also served as a trustee of Barnard College.

At Fordham, the couple created several scholarships, supported science education, and gave generously to the Fordham Fund. Their generosity also had an impact on several Rose Hill buildings, including the University Church, where the couple contributed toward its restoration. Two years ago, their philanthropy was recognized with the naming of Bepler Commons at Faber Hall. The Beplers are among the three largest donors to the University.

“Steve was a quiet and generous philanthropist,” said James Buckman, FCRH ’66, a member of the Fordham Board of Trustees. “While a leading benefactor of Fordham University and other Jesuit apostolic enterprises, one would rarely find his name associated with them. He preferred to endow a university chair in the name of a favorite Jesuit teacher than his own. He will be sorely missed.”

When the University honored the couple with the Fordham Founder’s Award in 2007, Kim, a successful businesswoman in her own right, spoke of her husband’s affinity for, and devotion to, his alma mater.

“I love my husband and his love of all things Fordham,” she said.

At the 2014 commencement ceremony, Bepler received the University’s highest honor: a Doctor of Humane Letters.

Throughout his life, Bepler credited the Jesuits with laying the groundwork for his success in life. He specifically honored the educators so dear to his heart by endowing two Fordham faculty chairs: the John D. Boyd, S.J., Chair in Poetic Imagination and the Karl Rahner, S.J., Memorial Chair in Theology.

Father Boyd, one of Bepler’s professors, was a distinguished scholar whose work focused on the poetic imagination and its relationship to life.

“His was the third class I ever took at Fordham,” Bepler said in 2009, speaking at an inaugural ceremony to launch the chair. “He loved to teach. He made everything interesting, which is such an important and rare quality in an educator.”

As avid art and antique collectors, the couple traveled extensively throughout Europe and Asia.

In addition to his loving wife, Kim, Bepler is survived by three children from a previous marriage, Bettina, Peter, and Galen; his brother Peter, and sister, Cathy; and two grandchildren. He also leaves behind three dogs, to which he was devoted.

“We all come to this end point in our lives. But I have known preciously few who have spent willingly their entire lives in full conscious preparation for this moment,” said John Kehoe, FCRH ’60, FCLC ’85, a Fordham trustee. “Steve was such a rare person. His generosity of spirit in all things was as effusive as the quickness of his wry wit and humor. He treasured the gift of his early Jesuit education and, as a true disciple, labored to extend it to as many young people as he could in as many ways as he could find to do so, right to the end of his life. Because of that, and of his wife, Kim, having shared fully in that journey, his work and spirit will continue to live and be remembered long into the future.”