skip to main content
Return to Fordham University
You are at:Home»Inside Fordham»Fordham Track Great to Be Honored at the New York Athletic Club 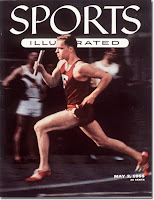 Courtney, who is among the greatest track athletes Fordham ever produced, will be honored along with eight other Olympic Gold medalists in track &amp; field. All honorees have competed in the Millrose Games, which take place on Friday, Jan. 28, at Madison Square Garden.

While at Fordham, Courtney was on two-mile team, which set the World Record in California in 1954. The next year, he graced the cover of Sports Illustrated in his Fordham gear.

After graduating from Fordham, Courtney made the Olympic team and took first-place, winning the gold medal and setting an Olympic record in the 800 meter run at the 1956 Olympics in Melbourne, Australia. He also anchored the 4 X 400 relay for a second gold medal.

Courtney went on to set many other world records in 1956 and 1957 before retiring from competition. He later became assistant track coach at Harvard for one year before obtaining his M.B.A. from Harvard Business. Courtney was inducted into the Fordham Athletics Hall of Fame in 1971.

Fellow alumnus, Norbert Sander, M.D., (FCRH ’64), will host the reception along with officers from the New York Athletic Club. Sander, the 1974 winner of the New York City Marathon, is the architect of a modern initiative that brought running back to life at Manhattan’s 168th Street Armory, which celebrated its 100th anniversary in 2010.

A significant contingent of one of Fordham’s greatest Track &amp; Field squads, Classes 1963-65, will hold a reunion at the 104th edition of the Millrose Games at the Garden on Friday night to celebrate Fordham’s rich history of success in these historic Games.