Basketball, football, swimming, track and field—the list of sports that Fordham undergraduates can choose from is extensive.

This year, the athletics department added another option: esports.

On March 4 at 6 p.m., the department will host a tournament for students who play NBA 2K21—a multiplayer online basketball game — on the Sony PlayStation.

The tournament, which is open to all students, promises awards of Applebee’s gift cards for $400, $200, and $100 for first through fourth-place finishers. 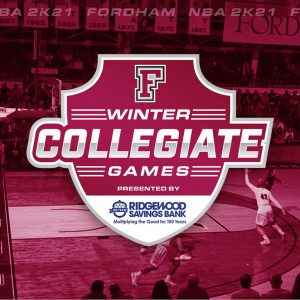 Nick LaMarca, assistant athletic director for marketing, tickets and promotions, said the department began looking into opportunities to connect students with esports in the fall when it became clear that many normal activities would be untenable.

“We faced real challenges with limiting clubs, recreational sports, and intramurals, and even athletics being on pause, so it was an opportunity to provide our students another way to compete, stay active, and engage with each other without having to be in the same room,” he said.

Thursday’s tournament is part of a larger effort to bring esports to Fordham students. In January, athletics announced that the University had joined ECAC Esports, a league that supervises tournaments with games such as Super Smash Bros, Fortnite, and League of Legends. The March 4 tournament, which at press time had a dozen registrants, is an additional opportunity.

LaMarca said Fordham will again sign on with ECAC in the fall and is hopeful that students will join. Although it’s run by the athletics department, LaMarca emphasized that it’s open to the entire student body.

Esports have exploded in recent years, such that when the makers of the game Fortnight staged a world championship in 2019, they booked Arthur Ashe stadium in Queens for the occasion and the winner took home a $3 million prize.

“You now have universities that have legit gaming facilities and have invested in coaches and directors of programs, and you have schools that are just feeling it out and running tournaments to gauge interest,” said LaMarca, who said Fordham falls into the latter category.

“We’re teaching remotely, and we’re learning remotely. Activities pause, they resume, they pause, they resume again. So we’re seeing how important it is that we have something we can participate in, where we can stay connected and we can compete with each other and win prizes for an industry that’s ever-evolving.”

Registration for Wednesday’s tournament closes on March 3 at 7 p.m.