skip to main content
Return to Fordham University
You are at:Home»Editor's Picks»Fordham to Honor Donors and Scholars at Founder’s Award Dinner

The University will honor four of its most accomplished, loyal supporters and a distinguished group of scholars at the Fourteenth Annual Fordham Founder’s Award Dinner, to be held on March 23 at the Waldorf Astoria in New York City.

Proceeds from the annual dinner benefit the Fordham Founder’s Undergraduate Scholarship Fund, which supports undergraduate students who demonstrate an intellectual curiosity and a desire for excellence. This year, Fordham will honor 16 Founder’s scholarship recipients, whose majors range from theater and dance to finance and neuroscience. 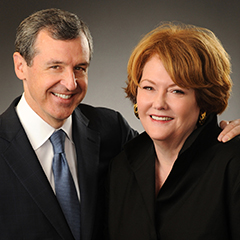 Fordham will also present two couples with the Founder’s Award for their achievements and their contributions to the University: Edward M. Stroz, GSB ’79, and Sally Spooner; and William J. Toppeta, Esq., FCRH ’70, PAR, and Debra J. Toppeta, PAR.

After a long career as a special agent with the FBI, in 2000 Stroz founded Stroz Friedberg, a global digital risk management and investigations firm. He serves as vice chair of the University’s Board of Trustees and co-chaired the advisory committee for Fordham’s International Conference on Cyber Security, which just wrapped on Jan. 8. Spooner is secretary of the board of the ASPCA.

Stroz said he knew he wanted to be a special agent before he ever came to Fordham, and that the University’s Jesuit philosophy of caring for the whole person served him well. “You really do your work as an FBI agent person by person,” he said.

Bill Toppeta, a Fordham trustee, was president of MetLife International from 2001 to 2011. During his tenure, he helped grow global operating revenues from $1.2 billion to $7.5 billion by 2010. He’s now president of Macomber Peak Partners LLC, a management consultant firm. 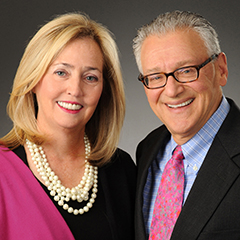 Debra Toppeta is the founder and publisher of Woman Around Town, an award-winning website that helps women get the most out of living in New York City and Washington, D.C. She is a member of the Board of Governors of the New York Press Club.

Both couples have established scholarships at Fordham as well as faculty chairs.