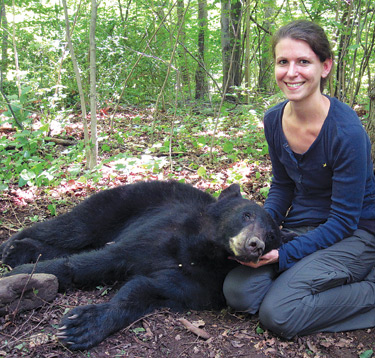 On the “Aww, aren’t they cute!” scale, bears, chipmunks, and mice would seem to inhabit the opposite
ends of the spectrum.

But from Christine Zolnik’s perspective, they’re on equal footing when it comes to understanding how tick-borne diseases spread through cities, suburbs and forests.

For her dissertation, Zolnik, a doctoral candidate in biology who works out of the Louis Calder Biological Field Station’s vector ecology lab, is looking at the effects of urbanization on populations of ticks and two of their most common hosts—white-footed mice and eastern chipmunks.

She spent this past summer trapping and taking DNA samples from them in locations ranging from the Bronx to Duchess County and Western Connecticut. During the summer of 2011, she collected ticks from the same locales. Once she has gathered enough samples, she plans to conduct genetic tests to compare the populations of ticks and their hosts at the sites.

The questions she wants to answer are, how closely do tick populations correlate with mice and chipmunks, which are their common hosts? And how do human landscape changes such as urbanization influence the populations of these small mammals and the parasites and diseases they carry?

“We know that other animals can harbor these ticks and move them, but we’re not really sure how important mice and chipmunks are at maintaining the population and moving them around,” she said.

“If the ticks match the chipmunks and mice, then it’s pretty good evidence that even though birds and deer are important carriers, they’re not as important for dispersal.”

Black bears, on the other hand, are not actively roaming the woods of Westchester, but they can be found in rural New Jersey, where the New Jersey Fish and Wildlife Service actively monitors them. Since the only studies of bears as carriers of tick-borne diseases have been done in places like Georgia and Florida, Zolnick figured bears were worthy of study too.

“I was able to tag along and participate in the services’ research trapping in June and September to do a census of the parasites on the bears’ bodies, and to get a real sense of the parasites on them, in an area where bears are becoming more prevalent and where ticks and tick-borne diseases are prevalent,” she said. “I took some blood to test for tick-borne pathogens as well.”

Zolnik said the idea is to get a better feel for the complex relationship between ticks, their hosts, and the diseases they carry. Mice and chipmunks are abundant and close to the ground, which makes them easier for immature-stage ticks to latch on to. But unlike bears and deer, they don’t travel very far.

Variations also exist within animals that exhibit similar behaviors and have similar body types; for example, raccoons make for good hosts while opossums do not.

“Even if deer get infected with Lyme, they won’t transmit it to another tick. It’s the same with people. We can get Lyme, but we clear it out of our blood so fast, that if another tick were to feed on us, we wouldn’t infect that tick.”

So who makes for a better ride for ticks looking to expand their range? A big animal that’s harder to reach but travels great distances? Or a small one that is more accessible but is limited in how far it can travel?

Zolnik hopes to shed some light on this question. Last month, she presented a portion of her research involving the genetic differentiation and disease prevalence of blacklegged ticks along an urban-rural gradient at the Fourth Biennial Conference of the International Association for Ecology and Health, Kunming City, China and the Third International Conference of Urban Biodiversity and Design, Mumbai, India.