skip to main content
Return to Fordham University
You are at:Home»Inside Fordham»Fordham Student Sings for a Cure for Cystic Fibrosis 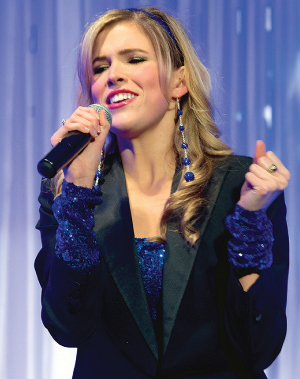 As a professional singer and avid performer, Julia Rae Schlucter was reluctant at first to make it known that she was fighting an invisible battle.

“I didn’t want people to find out and then discount my ability or put limits on me,” said Schlucter, a rising junior at Fordham College at Lincoln Center.

But Schlucter, who was born with cystic fibrosis, has never been one to sit backstage for long. By 16, she began to use her passion for singing as a means of speaking publicly about her illness.

“When parents of younger children with cystic fibrosis (CF) would come up to me after I spoke at an event, it kept me going and inspired me to make what I was doing an official nonprofit organization,” she said.

That same year, Schlucter launched her foundation, Singing at the Top of My Lungs. Funds raised by the foundation go toward researching a cure for CF, a genetic disease that causes the body to produce a thick, sticky mucus that clogs the lungs and obstructs digestive processes. Patients typically experience a persistent cough and frequent chest infections.

“I refer to it as an invisible illness,” said Schlucter. “To many outsiders, it’s not evident that CF patients are fighting for their lives. On the outside, they can look like any other person, but the inside tells a different story.”

When Schlucter was born, the average life expectancy for a CF patient was early 20s. Today, medical advances have pushed that number to 37, although many patients live into their 40s and beyond. Further research is critical to continue raising life expectancy as well as improve patients’ quality of life, Schlucter said.

Fifty percent of the proceeds raised by Singing at the Top of My Lungs go to the Cystic Fibrosis Foundation. The other half goes to underfunded programs in children’s hospitals that focus on the psychosocial wellbeing of patients, such as child life specialists and music therapists.

“They’re really the unsung heroes of our nation’s hospitals. I like to put the spotlight on the work they do, because I know I wouldn’t be pursuing my dream and be able to speak about CF without their care,” Schlucter said.

Her singing career extends beyond advocacy. At 17, Schlucter traveled to Los Angeles to record an album. Her original song “Be That Girl” is featured in the movie The Greening of Whitney Brown, starring Brooke Shields. She has also appeared on Radio Disney and has sang for the ABC Thanksgiving Day Parade.

“I am passionate about music. I find release through my favorite songs and artists, and I encourage other patients to do the same.”

It has been tough for Schlucter to reconcile being born with the ability to sing alongside having a chronic lung disease, but she has found ways over the years to accommodate. To ensure that she can sing, she does up to two hours of preventive treatment a day. She said she multitasks by carrying out her treatments (a nebulizer and a vest that shakes her lungs) while answering emails or doing schoolwork.

Alongside her singing career, Schlucter is pursuing a successful run in the Miss American organization. In 2008, she was crowned Miss Pennsylvania’s Outstanding Teen, and to date has won $25,000 in scholarships. On Saturday, she will be competing for the title of Miss New York en route to the Miss America pageant.

She credits her family with providing a strong support system during difficult times, for instance, when her most recent hospitalization coincided with both Thanksgiving and preparing for Fordham’s final exams.

“When CF gets in the way of my dream or my daily routine, I rely heavily on my family. They’re there to give a fresh perspective.”

A communications and media studies major, Schlucter plans to become a broadcast journalist specializing in healthcare. In the meantime, she continues to advocate for the CF community and to encourage young patients to pursue their dreams despite the challenges that face them.

“My hope is that as we progress with research, my organization will no longer have to donate to research because we have found a cure.”