skip to main content
Return to Fordham University
You are at:Home»University News»Fordham Represents at Student-Veteran Conference with Jill Biden
Jill Biden thanks student veterans for their leadership.(Screenshot from SVA NatCon 2021)
Fordham was well represented at this year’s national conference for the Student Veterans of America (SVA) held on Feb. 20. 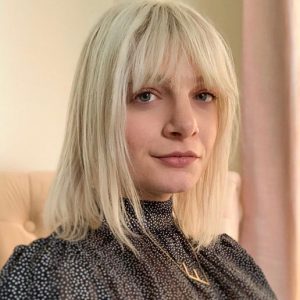 Fordham SVA chapter president, Emma Cassidy, was nominated as a finalist for Student Veteran of the Year and Chief Diversity Officer Rafael Zapata spoke on a panel for the two-day event—which included a keynote address by First Lady Jill Biden, Ed.D.

Biden thanked the veterans for their service and encouraged attendees to share their stories so that other veterans might view higher education as a way back to civilian life.

“I’ve taught many veterans transitioning from military service, worried that they might not adjust to civilian life, only to find confidence and purpose in the classes they take,” said Biden. “I’ve seen them not only adjust, but thrive and become leaders in their communities and that’s what we see in SVA’s award nominees today.”

Zapata, who spoke on a panel on leadership an diversity, said that the many SVA chapters reflected the diversity of those communities and hold the potential for forging racial harmony.

“The military is uniquely situated to bring people of all kinds together,” he said. “I can’t think of any other organization that can bring people together who have never encountered each other—even more than colleges and universities. The military looks more like this country than most institutions, and I think there are great possibilities in that.”

For her part, Cassidy, who took the helm of Fordham SVA in January, said she was surprised to be nominated. She deflected attention to her predecessor Matias Ayala who she said maintained community and provided ways for members of the group, known as RamVets, to connect virtually during the pandemic.

“I was surprised that it was me, and while I’m proud to have been nominated, there were others who made more of an impact,” she said. “If had been on the nominating committee I would have chosen Matias. I have very big shoes to fill.”

Cassidy said she has given little thought to her role as a woman leading the chapter, though she acknowledged the challenges she faced when she was enlisted in the Navy.

“I was proud to be a woman in the military, but I had to adapt to a male-centric work environment,” she said. “I definitely had some pushback on my attitude. I think they expected me to be much sweeter and demure, but I didn’t see much point of being that way.”

For now, she said, she’s focused on her new role and picking up several virtual events, as well as a few socially distanced in-person events. She noted that the group will hold a socially distanced volunteer effort to help pack COVID-19 relief boxes in Brooklyn at 11 a.m. on Feb. 27 in partnership with DreamcenterNYC. RamVets can register ahead of the event, and the rest of the Fordham community can join the vets by registering at the What Remains website and selecting the Harman Street locale from the dropdown menus.

In addition to the volunteer event, the Department of Veterans Affairs will hold a virtual event to help Fordham veterans navigate disability benefits on Thurs., Feb 25 from 7:30 a.m. until 1 p.m. Assistant Director of Military and Veterans’ Services Steven Hellman said student veterans can email [email protected] to set up and appointment to revisit an old claim or start a new one.

“It’s a pretty wild process to get your disability claim done on your own without a support system in place and luckily the VA is sending a team over to help all our vets one-on-one,” said Hellman.

Hellman said that veterans often experience delayed ailments well after they leave the military. He encouraged the notoriously self-sufficient vets to reach out for help when they need it. It’s a notion that Zapata touched on during his panel, by paraphrasing the poet Audre Lorde.