In the Philosophy of Knowledge (Sheed and Ward, 1964), the late Kenneth Gallagher, professor emeritus of philosophy at Fordham, described knowledge as a “supremely personal act.”

“The existing universal which is human communion, in which my thought is born, is the medium through which I belong to the cognitional universal, to truth,” wrote Gallagher, who died at 94 on May 5, 2017.

Through his wisdom, students like Caroline Heavey, GSE’ 61, learned that questions were just as important as answers.

“He wasn’t teaching us from the ‘outside,”’ said Heavey. “He would develop ideas in you as a person. He made it all a part of the process of learning.”

His works on the theory of knowledge were well-regarded by many of his academic peers. Joseph Koterski S.J., associate professor of philosophy, and editor in chief of the International Philosophical Quarterly, refers to the Philosophy of Knowledge in many of his lectures today.

“His appreciation of the contributions of philosophers from vastly different schools of thought is a model of the openness that we need to cultivate in our search for truth,” he said.

Gallagher, who lived in Bayside, Queens for more than 40 years, began working at Fordham in 1955. He taught courses on Christian existentialism, human nature, and epistemology. Marie Knoblock, GSS ’63, GSE ’61, also a former student, described him as a “loyal Catholic layman” who not only connected personhood to God, but also helped students to see the relevance of philosophy in their lives. 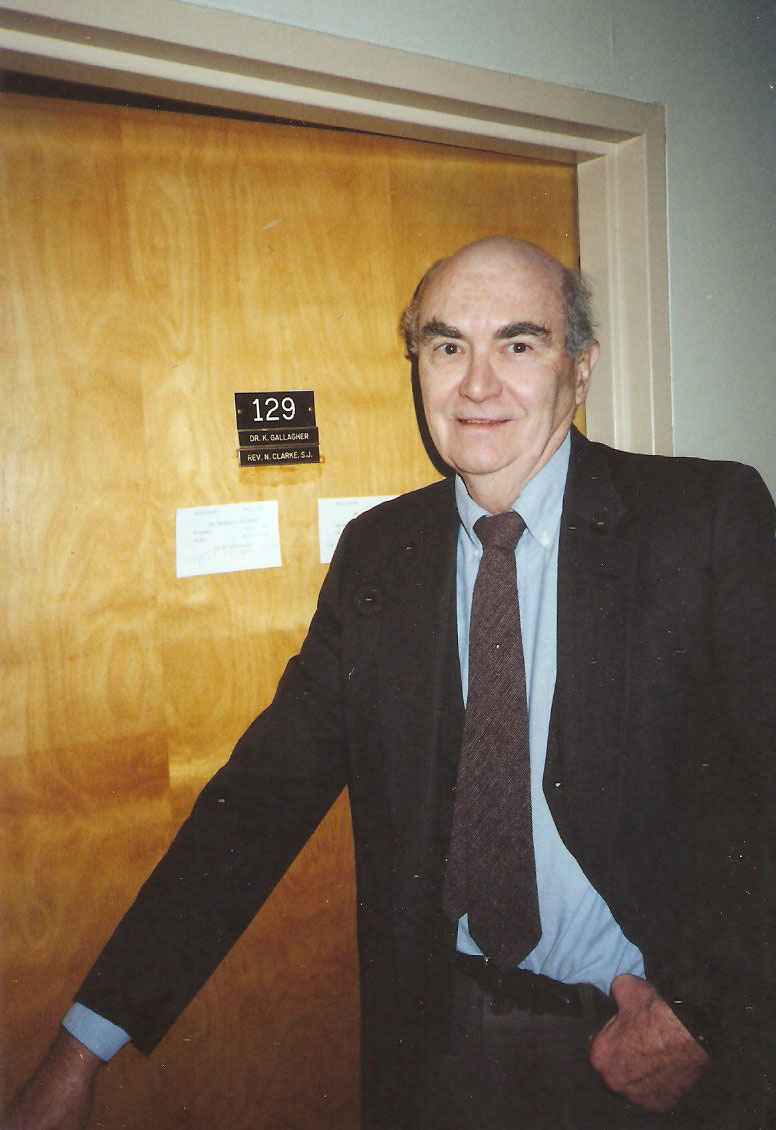 “I could remember learning about the world and God and seeing things in a whole new positive light, and I began to see that this is where truth is,” she said. “Dr. Gallagher taught us that you can learn many things from your rational thinking ability, which is also God given.”

He was particularly interested in the works of Søren Aabye Kierkegaard, Plato, and the French Catholic philosopher Gabriel Marcel. Gallagher explored Marcel’s theories and thoughts in The Philosophy of Gabriel Marcel (Fordham University Press, 1962).

“A lot of the philosophers that he admired were not merely clever,” said Gallagher’s son Terence Gallagher. “Fundamentally, they had a religious outlook. He didn’t see philosophy and religion as opposing things.”

When he wasn’t teaching, Gallagher, who served in the United States Army Air Corps from 1943 to 1946, relished Irish and German folk music, old black and white movies, and the poems of William Wordsworth. Having studied German at the Goethe -Institut in the mid 60s, he translated German poetry for the literary periodical The Formalist.

Despite losing his wife in 2006 and battling dementia and personal injuries toward the end of life, Gallagher lived a life of gratitude, Terence said.

“He was never discontent, and he inculcated that attitude in our family,” he said. “He always got the most out of life.”

Gallagher is survived by his daughter Kathleen O’Malley; his son Terence Gallagher; his brother Raymond Gallagher; and grandchildren Thomas and Michael O’Malley.