John J. Heaney, Ph.D., a professor emeritus of theology and a former member of the Jesuit order, passed away on May 24.

Heaney, who was a member of the Fordham faculty for 40 years, was described by those who knew him as having a buttoned-down demeanor that belied his offbeat research in the psychic and the paranormal.

“He didn’t come across as flamboyant, so the fact that he was doing this work out on the borders was interesting; he was taking risks,” said Mary Callaway, Ph.D., associate professor of theology. “He was doing new things that in those days would’ve been cutting edge, innovative, creative, edgy, and a little dicey.” 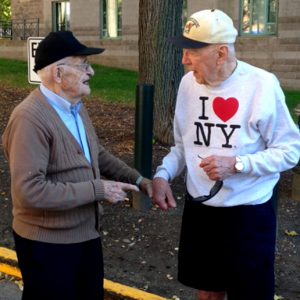 On his last visit to Fordham in October 2015, Heaney (left) had a chance encounter with his friend and former seminary classmate Richard Hoar, S.J.

Callaway said that Heaney’s work fell into the realm of systematic theology, an attempt to put together views of the basic theological principles such as grace, God, and salvation, to name a few.

“I found one of his essays from the 1980s very useful before I came to Fordham,” said Elizabeth Johnson, C.S.J., Distinguished Professor of Theology. “It was on psychology and religion, analyzing the psychological aspect of committing yourself to a faith. It was very insightful and sharp.”

Heaney’s published works indicate that his more avant-garde interests built on earlier research that examined the writings of modernist theologian Friedrich von Hügel and the challenges of the post-Vatican II Church and modernism.

Heaney left the Society of Jesus to marry his first wife, Patricia Bree Heaney. In the aftermath of Vatican II, the church had allowed for former priests to be laicized, so that they could be honorably relieved of their vows, said Joseph Lienhard, S.J., professor of theology. But just as quickly as the door opened to the new process, he said, it was shut—leaving Heaney’s status in limbo. 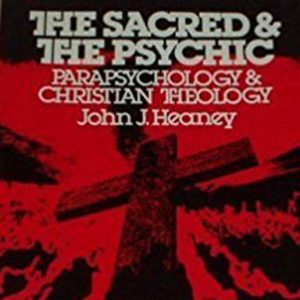 “He was caught in between, but he never showed a trace of bitterness,” said Callaway, who said he and his wife persevered and remained devout Catholics as they waited.

Heaney avoided another obstacle, thanks to Fordham’s practice of keeping former priests in their employ, said Father Lienhard. At the time many other Catholic universities would fire a priest after he left the priesthood.

“That was an era when priests were leaving in significant numbers, but Fordham respected his tenure,” he said.

Eventually, with the help of a few Fordham Jesuits, Heaney was laicized. He and Patricia enjoyed a full happy marriage until her death in 1997.

Sister Johnson said she remembered it as a tough time for Heaney. “He was totally bereft,” she said.

But Heaney remained resilient, she said. He eventually found love once again, after joining a Catholic widows and widowers club in Westchester. There he met his second wife, Maureen Carroll Polchinski. Polchinski’s daughter, Barbara Alammari, FCLC ’94, GSS ’02, remembers the summer her mother brought him to meet her. They had just met and he helped fix Alammari’s sink.

“He was a tinkerer and loved to fix things,” she said. “He never called a repair man for 20 years, not even the cable man. He’d persevere and do it himself until he figured it out.”

The couple spent many happy years together, said Alammari. Though long retired, she said that Heaney still considered Fordham his “home away from home.” And he continued to keep up with current theological thinking.

“His work was interwoven with his life,” she said. “He received America Magazine and read it all the time, and would hand it to me with a certain page open for me to read.”

As his wife’s health began to decline, he transformed their living room into a room where he could care for her, Alammari said. For the past eight years, he slept on a pullout couch to be near her.

“John, to me, was the most spiritually evolved person that I have ever known,” said Alammari. “He set an example, he really lived the way Jesus told human beings to live.

“He helped me spiritually, not with his books, but with the way that he lived.”