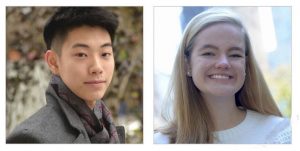 Despite the cancellation of the 2020 Fordham Founder’s Dinner, funds raised will still go toward Fordham Founder’s Undergraduate Scholarship Fund, which supports the 48 scholars pictured above and throughout the story. (Photos by Tom Stoelker and Taylor Ha).
The University raised $2,658,795 this year for the Fordham Founder’s Undergraduate Scholarship Fund—the largest amount raised since the Fordham Founder’s Dinner was initiated in 2002. Though the 2020 dinner, which was to be held on March 30 at the New York Hilton Midtown, had to be canceled due to the COVID-19 outbreak, the funds raised will still support 48 talented Founder’s Scholars, up from just six when the fund started. It is the most diverse scholarship fund at the University, with 50% of the students from underrepresented backgrounds.

The dinner was also set to celebrate the close of Faith and Hope | The Campaign for Financial Aid, which surpassed its goal of $175 million by bringing in a grand total of $175,311,288. The campaign supported existing scholarship funds and nearly 200 new scholarship funds for students—including Fulbright scholars, community leaders, and first-generation college students. 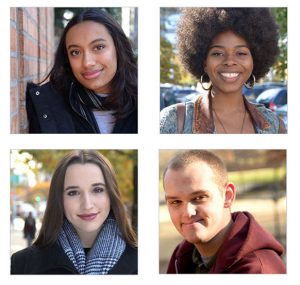 “In a year when nothing has run as usual, and we have all had more than our share of disappointments, I am incredibly proud of our Fordham Founder’s honorees and donors for their generosity and openheartedness toward our peerless Founder’s Scholars,” said Joseph M. McShane, S.J., president of the University. “Despite your own very real concerns about your health and that of your loved ones, and all the uncertainties with which the pandemic has presented us, you stepped up to ensure the continued education of your younger sisters and brothers in maroon. I may not be surprised by your selflessness, but I am deeply grateful, and once again filled with admiration for all that you do for the Fordham family.”

On Jan. 7, the University also bestowed the Founder’s Award upon Jean and Alex Trebek, PAR, in Los Angeles, who received a citation praising them as “ true partners in the mission of Fordham.” And on Dec. 16 of last year the late Jane M. Flaherty, PAR, was posthumously recognized at the Rose Hill campus for her support of the University and the cause of Catholic education.  Her husband James P. Flaherty, FCRH ’69, PAR—a 2011 honoree and their children received the award where she was hailed as “one of the angels of Fordham—a kind and selfless spirit who took joy in helping students realize their dreams through the scholarships she and her husband, Jim, established.”

The annual Founder’s Dinner is by far Fordham University’s most elegant event. But for all the glamour, the evening’s true stars have always been the Founder’s Scholars, extraordinary students who have benefited from the millions of dollars the event has raised over the years. 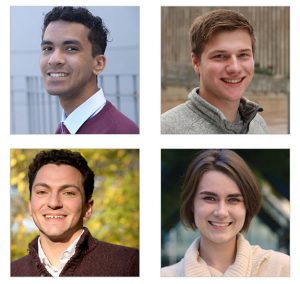 Christopher Wilson, FCLC ’17, a former Founder’s Scholar and donor to this year’s dinner, said that while he’s disappointed to miss the evening, he views his ticket purchase as an “investment.”

“I think it shows that we believe in the future,” said Wilson.

A graduate of the Ailey/Fordham BFA in Dance program, Wilson only recently started buying tickets for the event. He said it was a wonderful, if disorienting transition, moving from scholar to donor.

“You kind of go in as a student and you’re sort of the center of attention for the evening and the transition was weird for me,” he said, remembering last year’s dinner. “There was no Ram Van to take me back to my dorm. I had to get home on my own. It was the little things like that kind of made me realize, ‘Okay, we’re not students anymore. We’re grown up. I’m a big boy now.’”

Today, Wilson is a principal dancer with the Alvin Ailey American Dance Theater. When he goes to the Founder’s Dinner, he said, he enjoys running into old classmates and getting to know alumni from other schools. Though the event was canceled, he said he still felt like a participant.

“By still showing support for the scholars, it’s a way of us all coming together and uniting against this crazy monster that we’re dealing with right now,” he said. “And saying that we know that we’re going to come out of this.”

This year’s 48 Founder’s Scholars are not only the largest cohort ever, but also the most diverse group, comprising students with a wide variety of backgrounds and interests. From Astoria, New York, to Sandy Hook, Connecticut, to Montreal to Bloomfield Hills, Missouri, to Houston to Long Beach, California, the scholars represent nearly every region of the country—and beyond. Their passions are just as varied. Conner Chang studies business administration, Sarah Grandinetti majors in Russian, and Saeef Hossain focuses on psychology.

In an amusing speech prepared for the event, senior Devin D’Agostino, who majors in integrative neuroscience and philosophy, addressed how the University fosters diversity of thought. Though he didn’t get the chance to deliver it at the Hilton, he kindly recorded the speech on his phone from his home in Remsenburg, New York. In it, he described how a childhood interest in dinosaurs evolved from paleontology to biology to his current majors. He spoke of an initial conference with his adviser that began his evolution.

“For the first time in my life, I doubted dinosaurs,” he said. “Suddenly my image of the paleontologist became less of Dr. Grant from Jurassic Park … and more of Ross from Friends.”

Despite the seeming abandonment of his early interests, he said dinosaurs kept coming up his studies.

“I was suddenly encountering dinosaurs everywhere: in Ancient Literature …a picture of the Corinthian helmet clarified to me how the dome-headed Corthyosaurus got its name. In Philosophy of Human Nature … a reading on Plato’s concept of the forms provided to me a method of distinguishing between species in early Archosaurs. In Biopsychology … a lesson on localization in the brain revealed to me how scientists determine the sensory capacities of Tyrannosaurus rex,” he said.

He credited Fordham’s classic liberal arts education to opening his mind, allowing him to find dinosaurs in unexpected places.

“That is the magic of a Fordham education: With its multidisciplinary focus and emphasis on exploration, Fordham encourages us to find the unity in all things—a unity that comes from our pursuit of knowledge,” he said. “Whether it be finance, medieval literature, or dinosaurs, our passions create the unity.”

Looking to the Future in a Time of Crisis

Todd Cosenza, GABELLI ’95, LAW ’98, chair of the President’s Council and member of the Founder’s 2020 Dinner Committee, met Elizabeth Pinho-Cosenza, FCRH ’98, at Fordham College at Rose Hill. The couple eventually married at the University Church and continue to support Fordham through their work on the council and by giving to the Founder’s Scholarship Fund. Each year, they rally friends to come to the event. Cosenza, a partner at the law firm of Willkie Farr & Gallagher, LLP, said that while he most certainly understood that the event had to be canceled, he admitted that he was looking forward to seeing old college roommates and mentors as well as getting to meet the honorees.

“This year we have Joe Moglia who was being honored, and I was looking forward to meeting him,” said Cosenza.

Cosenza noted that an often-overlooked aspect of the event is that it showcases how far the University has come on the national stage.

“From the alumni perspective, given the prestige of the University, it really shows how our footprint has grown over the last 20 years, and how impressive our student body has become,” he said. “I think it’s just something that resonates with all the alums. It instills, even for the new scholars, the sense of community and the Fordham alumni network.” 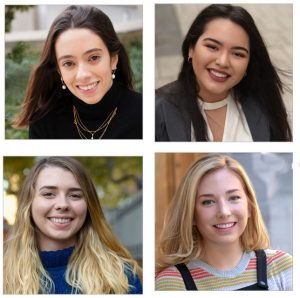 Regardless, he stressed the main purpose of the event remains the Founder’s Undergraduate Scholarship Fund.

“We need to make sure people don’t lose sight that the goal of the dinner is to help the scholarship fund, and ensure Fordham remains competitive with its peer universities,” he said. “So, we just go onward to 2021.”

“The importance of the Founder’s Dinner is the impact it has on students,” said Conley Salice, a member of the Board of Trustees, a Founder’s 2020 co-chair, and co-chair of the Faith & Hope campaign. “So, we weren’t able to have an exciting and fun-filled dinner party, but the need for scholarship dollars still exists and actually is growing. Many parents, and students, will be unable to work and their savings will be impacted.”

Conley Salice said that leaving the funds in place for the scholarships was more than a kind gesture; it shows support for the future of the city and the world at large.

“Once the students are able to get back to academics, we’re going to need them to be men and women for others and find ways to help our society learn from the experience and work well together to serve our neighbors,” she said. “Scholarship dollars are a great example of an opportunity to support that.”

Amanda Jara, FCRH ’18, a former Founder’s scholar who had also bought a ticket to Founder’s 2020, said that she is currently being solicited for donations by a variety of institutions, but giving to education hits home.

“I know what it meant to have everyone donate, to be a recipient, and to be on the other side of the equation,” she said. “I understand why it’s really important for the students to see that these donors and their community still have faith in them. We still hope for the best for them, and I feel that if we can demonstrate that with leaving our donations in place, then the whole campaign of Faith and Hope is worth it. We still have faith and hope in our students.”