“We had a record-breaking Giving Tuesday,” said Elaine Ezrapour, director of the Fordham Fund. “It’s very exciting to see the outpouring of ‘phil-‘Ram’-thropy.’”

Held this year on Dec. 3, Giving Tuesday, the Tuesday after Thanksgiving, has become an international day of charitable giving. Since 2015, Fordham has raised hundreds of thousands of dollars each year on this day. But 2019 marked the first year that the University raised more than a million.

The majority of the 1,589 gifts made this year were for Fordham athletics. More than $300,000 in gifts will help support the Frank McLaughlin Family Basketball Court and University sports teams. That includes the Fordham men’s rugby football team, which is raising money to fly to Ireland for the club’s first international tour in more than 50 years.

“Working with the Fordham Fund, we’ve created a Give Campus page for each of the varsity and club teams,” said Edward Kull, senior director of development and senior associate athletic director, adding that the student-athletes and coaches create videos for their teams letting everyone know what their needs are. “So it’s a real collaborative effort.” Squash, crew, football, water polo, and sailing were among the top raisers, he said.

More than $6,000 was raised for scholarships for Urban Plunge, a pre-orientation program where first-year undergraduate students participate in community service activities throughout the Bronx and Manhattan. The program, run by the Center for Community Engaged Learning, requires a $250 fee for each student that pays for their meals, transportation, and supplies. 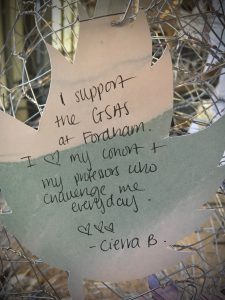 A leaf from the giving tree

Students across the University helped spearhead donation efforts, too. In O’Hare Hall, student callers reached out to dozens of alumni, parents, and friends of Fordham. Usually, they work three hours a day, Ezrapour said. But on Giving Tuesday, they worked from roughly 10 a.m. to 10 p.m. and secured 150 gifts over the phone.

Further downtown, the Student Philanthropy Committee at Lincoln Center set up a tabling session in the Lowenstein Center. For the first time, they created a “giving tree” fashioned out of chicken wire and multicolored leaf cut-outs. Committee members asked passing students to write on a leaf the things they are grateful for at Fordham—including causes they want to support in the future.

“They wrote wonderful notes about the different areas on campus that they feel connected to and care about,” Ezrapour said. “It was a great effort on their part, not only in raising awareness about Giving Tuesday, but also demonstrating to the campus community just how many potential areas there are to support.”