University Provost Stephen Freedman, Ph.D., whose commitment to local and global academic partnerships enhanced Fordham’s reputation in New York City and around the world, died suddenly on July 2 at his home in Hastings-on-Hudson, New York. He was 68.

Freedman joined Fordham in 2007 as senior vice president for academic affairs and chief academic officer. He was appointed provost in 2010.

“For more than a decade, Stephen served Fordham tirelessly. He was known for his devotion to the faculty, students, and the academic community, and for his commitment to research and a global university,” said Joseph M. McShane, S.J., president of Fordham.

“He was a warm and insightful friend and colleague, and a man of deep conviction and rectitude. Stephen’s death is a grievous loss not just for his family and Fordham friends, but for everyone who knew him. We will miss him terribly.” 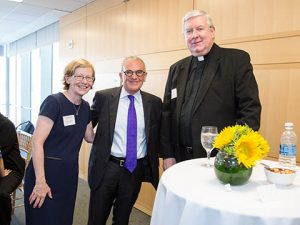 Pioneering Partnerships at Home and Abroad

Freedman saw tremendous potential in establishing and strengthening partnerships between Fordham and other world-class institutions, whether they be across Southern Boulevard in the Bronx or across the Atlantic in London.

A professor of ecology and evolutionary biology in addition to his role as provost, Freedman was instrumental in forging the Bronx Science Consortium—a research partnership between the University, the Albert Einstein College of Medicine/Yeshiva University, the Bronx Zoo/Wildlife Conservation Society, Montefiore Medical Center, and the New York Botanical Garden. The consortium offered numerous hands-on opportunities for undergraduate and graduate students to collaborate with some of the top researchers in the world.

Further abroad, he oversaw the progress of Fordham’s new London Centre campus, set to open this fall. In December 2017, when the University signed the lease on the new space, Freedman noted the many possibilities for scholarship beyond the traditional semester abroad.

“London will not merely be a campus for Fordham students to study away,” he said, “but a destination for students from other universities across Europe and Asia, and a hub of global scholarship. London, and our programs in Beijing and Pretoria, are templates for expanding the Fordham mission outside of New York City, and outside of the United States.” 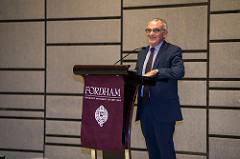 “He would often say that one of the responsibilities that the board gave him when he became provost was to develop an international strategy for Fordham, and so he took that seriously,” said Jonathan Crystal, Ph.D., interim vice president and chief academic officer in the Office of the Provost.

“He was incredibly innovative in establishing partnerships, online learning … he was a visionary. He was not stuck in the traditional ways of thinking about higher ed. He was really committed to making Fordham a global institution,” said Crystal. “He also put a lot of importance in his mentoring of me and other administrators and faculty at Fordham. … He was just incredibly selfless. He had so much heart.”

Ellen Fahey-Smith, associate vice president and chief of staff in the Office of the Provost, said Freedman “touched the hearts and minds of friends and colleagues throughout the world.”

“His legacy will endure in the transformative academic excellence he has insisted upon at Fordham, a place he cherished and called home,” said Fahey-Smith, who worked with Freedman for more than 10 years. “I will miss him deeply.”

Freedman worked closely with his faculty colleagues to develop new ideas and initiatives at home as well as abroad.

“He was very committed to the faculty,” said Magda Teter, Ph.D., the Shvidler Chair in Judaic Studies and professor of history at Fordham. “Once a faculty member too, he understood our work and the challenges we face. He was very strongly supportive and extremely warm,” she said through tears.

Teter said Freedman was “one of the key figures” in the development of Fordham’s Jewish Studies program, which Teter directs. She also said he was extremely proud to be the Jewish provost of a Jesuit university.

“He would always bring it up as a mark of pride in Fordham. He felt it spoke volumes about Fordham and its ethos of inclusion,” she said.

“He was a deeply spiritual man. When we were in Jerusalem together in 2016, it was a deeply moving experience for him, even though it was not his first time,” she said. “That’s why it worked for him to be a provost at Fordham—that commitment to faith.”

When he joined the Fordham faculty in 2007, Freedman told FORDHAM magazine that he’s “always seen science and religion as complementary.”

“My own scientific and religious backgrounds have enhanced each other, and I think informed discussions between theologians and scientists play a critical role in the shaping of ideas,” he said.

A native of Montreal, Freedman earned a B.S. from Loyola of Montreal, an M.S. in environmental studies from York University in Toronto, and a Ph.D. in ecology and evolutionary biology from the University of California at Irvine. He also completed the United Nations Graduate Study Program in Geneva.

He has spent nearly his entire career at Jesuit Universities; for 24 years he was at Loyola University of Chicago, where he taught biology and served as dean of Mundelein College. From 2002 until 2007, he was academic vice president at Gonzaga University in Spokane, Washington.

Freedman is survived by his wife, Eileen; his sons, Zac and Noah; and his grandson Aaron. Fordham will hold a memorial service to honor him in the fall.