Summer at Fordham has been all about preparing for moving day—but not just for the approximately 2,000 incoming freshmen preparing to take up residence here. 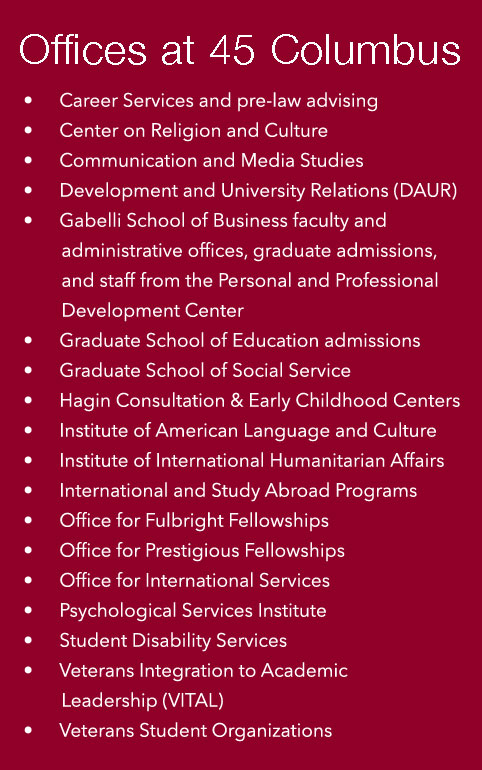 In July, faculty and administrators representing 18 departments, offices, and centers across the University moved into new office space at 45 Columbus Avenue. The nine-story building is located directly across from the Law School.

The move allows these various departments—which were previously scattered among three different buildings around Columbus Circle—to consolidate into one Fordham-owned building in close proximity to the Lincoln Center campus.

“We had community members in three different locations on nine different floors, operating under five different leases, and so we wanted to bring everyone closer to home,” said Brian Byrne, vice president for Lincoln Center.

“It was also a strategic move. Those leases were coming to an end and were about to go up dramatically,” Byrne said. “So, financially, this was a homerun for the University.”

Formerly the College Board headquarters, the building features a series of meeting areas and boardrooms, a private garden, and two new classrooms. It is attached to a separate, 24-story condominium building, which faces 61st Street. 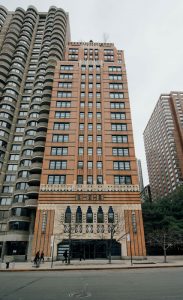 “It’s a great space, and it has allowed us to be a little unconventional with our workspace,” said Jacqueline Reich, PhD, chair of the communication and media studies department, which occupies the seventh floor of 45 Columbus.

Reich said the move was an opportunity to restructure the department’s layout in an effort to encourage collaboration. Faculty offices encircle a communal space with comfortable chairs, laptops, printers, scanners, and other amenities.

“Students and faculty can have meetings or work on projects together,” Reich said. “The idea was to have an open, collaborative environment to foster innovation.”

45 Columbus Avenue circa 1936. An Aztec motif of terra cotta chevrons and medallions were meant to indicate the innovative nature of the building’s function.

The new digs on Columbus Avenue come with a storied past. Built in 1929, the structure was home to one of the first automatic parking garages in New York City. The Kent Automatic Garage used an electrical “parking machine,” which hooked cars by the rear axle and towed them from the elevator platform to a parking spot. The exterior’s unique Art Deco style—designed by the architectural firm Jardine, Hill & Murdock—was meant to evoke the garage’s innovation and modernity.

The Kent venture didn’t last long—the enterprise fell through in 1931 amidst the Great Depression. The structure remained a garage until 1943, when it was sold and converted to the Sofia Brothers Warehouse.

In 1982, the Landmarks Preservation Commission designated the building as a landmark, calling it a “notable example of the Art Deco style in New York City… [and]one of the finest and most innovative examples of a uniquely 20th-century type of architecture, the urban parking garage.”