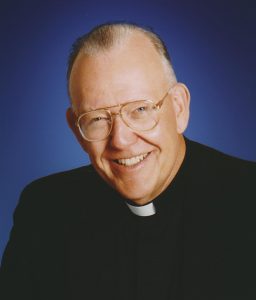 Vincent M. Cooke, S.J., FCRH ’60, JES ’62, GSAS ’65, a New York City native who taught at Fordham before being tapped for academic leadership positions culminating with the presidency of Canisius College, died on June 22.

“Vincent Cooke was a visionary in higher education, and a tireless educator and administrator. His work at Canisius College was truly transformative,” said Joseph M. McShane, S.J., president of Fordham.

“I count his friendship and wise counsel to be among the great blessings of my life. He will be sorely missed.”

Just as Fordham was once geared toward serving students in the New York City metropolitan area, Canisius College was primarily a commuter college when Father Cooke took over as its 23rd president in 1993. When he retired 17 years later, it had been transformed into the area’s largest private university, having expanded through 24 major projects, including eight residence halls for out-of-town students.

Father Cooke, who entered the Society of Jesus in 1954 after graduating from Xavier High School in Manhattan, achieved this by overseeing the college’s first comprehensive capital campaign in 2000, which raised $39 million. A second campaign, the largest in the college’s history, began in 2007 and raised $66 million during his presidency.

He was also credited with raising academic standards, encouraging the establishment of new undergraduate and graduate major programs, lowering the faculty-student ratio, and increasing enrollment by recruiting students from outside Western New York.

After his retirement from Canisius, Father Cooke returned to New York City to become assistant to the provincial for higher education at the New York Province of the Society of Jesus. He later assumed the position of assistant for strategic planning for Maryland, New England, and New York Provinces.