“We have lost a great heart today. Jack Kehoe was a gentleman through and through, devoted to Fordham, and deeply generous with his time and resources,” said Joseph M. McShane, S.J., president of the University.

“He was a warm and loyal friend and mentor to me, and I will miss him more than words can say. I know the Fordham family joins me in keeping Peggy and all of Jack’s family and loved ones in our thoughts and prayers.”

Born on August 5, 1938, Kehoe, a resident of New York City, first enrolled at Fordham in 1956. In 1958, he enlisted in the U.S. Marine Corps Reserve, where he served as sergeant up until 1964, receiving an American Spirit of Honor Medal.

He received his certification in investment analysis from The New York Institute of Finance in 1960, and went on to earn his master’s degree in business policy from Columbia University’s Graduate School of Business in 1979. 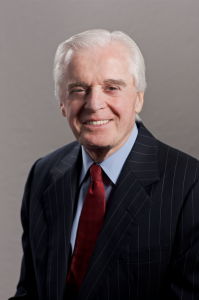 From 2005 to 2011, Kehoe served as a Trustee of Fordham University, where he held several leadership positions during his tenure. These included vice chair of the Nominating and Governance Committee, chair of the University Relations Committee, a member of the Board’s Executive Committee, and secretary of the Board of Trustees. In 2009, he was a recipient of the Fordham Founder’s Award.

Kehoe also served as co-chair of Fordham’s historic capital campaign, Excelsior | Ever Upward | The Campaign for Fordham, which closed in 2014, having raised $540 million.

He was elected a Trustee Fellow in 2016.

Up until his death, Kehoe also served on the Fordham College at Lincoln Center Board of Advisers and on the Executive Committee of the President’s Council.

Those close to him described him as a “devoted father, husband, and friend” who “loved Fordham and all of its people.”

“He had the strength and fortitude of his Marine Corps training, yet the empathy, compassion, and faith of a son of Ignatius,” said Fordham Trustee Fellow James E. Buckman, FCRH ’66, PAR, friend, and retired vice chairman of York Capital Management. “He spared nothing of himself on behalf of Fordham, from sharing his treasure and his time to his leadership and total commitment.”

In 2007, Kehoe became a member of the inaugural class inducted into the University’s Archbishop Hughes Society, which recognizes those individuals and institutions whose lifetime support of the University totals $1 million or more. Among Kehoe’s many contributions to the University was a generous gift to rebuild the Lowenstein Center’s Black Box Studio Theatre on the Lincoln Center campus, which was renamed the Veronica Lally Kehoe Studio Theatre in memory of his late wife, Veronica, FCLC ’02, who passed away in 2007.

At Kehoe’s request, a portion of that gift was allocated to establish a scholarship fund for Fordham students in need.