skip to main content
Return to Fordham University
You are at:Home»Colleges and Schools»Graduate School of Arts and Sciences»Fordham Mourns Theology Doctoral Student 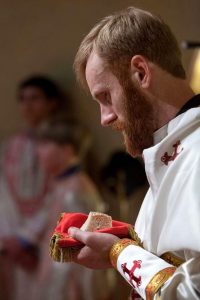 Father Baker at his ordination in January.

The Fordham community is saddened by the death of the Rev. Matthew Baker, 37, a doctoral candidate in theology in the Graduate School of Arts & Sciences.

Baker, who had been appointed pastor of the Holy Trinity Greek Orthodox Church in Norwich, Connecticut on Jan. 15, died on March 1 in a car accident. He is survived by his wife, Katherine, and six children.

“Today we have lost one of our own: a student and a scholar from the heart of our community,” said Joseph M. McShane, SJ, president of Fordham.

“What a tragic loss to his wife and children, to his loved ones, and to the Fordham family. What grief they must feel. I know the University community joins me in prayer for Matthew, and for his family. He, and they, are in our hearts and minds today.”

A wake will be held Friday, March 6, from 5 to 9 p.m. at Holy Trinity Greek Orthodox Church, 247 Washington St. in Norwich. Divine Liturgy will be celebrated Saturday, March 7, at Annunciation Greek Orthodox Church, 175 Oaklawn Ave., Cranston, Rhode Island from 8:30 to 10 a.m., followed by a viewing from 10 to 11 a.m., and subsequent funeral service.

A native of Cranston, Rhode Island, Baker lived at St. Vladimir’s Seminary in Yonkers while he worked toward his degree. He held a Master of Divinity from St. Tikhon’s Orthodox Theological Seminary in South Canaan, Pennsylvania, in 2008, and a Master of Arts from Holy Cross Greek Orthodox School of Theology in Brookline, Massachusetts.

He was ordained to the priesthood in January 2014 by His Eminence Methodios, Metropolitan of Boston of the Greek Orthodox Archdiocese of North America. That same month he began teaching as an adjunct professor of theology at Hellenic College/Holy Cross Greek Orthodox School of Theology.

At Fordham, Baker was about one year shy of completing a dissertation on Georges Vasilievich Florovsky, Orthodox Christian priest, theologian, historian, and ecumenist who engaged in the 20th-century philosophy movement of hermeneutics.

“Matthew had a brilliant mind and a great love of theology, but not simply for its own sake. He believed it mattered for people’s lives, and most especially for people’s relationship with God,” said Papanikolaou, who is senior fellow and co-founder of Fordham’s Orthodox Christian Studies Center. He noted that John Zizioulas, Eastern Orthodox Metropolitan of Pergamon, had taken notice of a chapter in Baker’s dissertation.

“He was no ordinary doctoral student,” said Papanikolaou. “He’d already developed international contacts, and was becoming internationally recognized as an emerging voice in Orthodox theology.”

J. Patrick Hornbeck, PhD, chair of the theology department, said that Baker’s work was already being translated into languages throughout the Orthodox Christian world.

“Our department was proud to count him among our doctoral students, and in his years with us, he exemplified what an Orthodox engagement with the life of the mind could be.”

An online crowd funding account has been set up to help provide for his family.