skip to main content
Return to Fordham University
You are at:Home»University News»Fordham Mourns the Passing of Trustee Fellow Paul Williamson
Paul Williamson at Commencement 2017 (Photo by Chris Taggart)
Paul G. Williamson, a longtime friend of Fordham, an avid basketball fan, a tenacious businessman, and a University trustee fellow, died on Aug. 12 in New York City. He was 79 years old.

Williamson served as a Fordham trustee from 1987 to 1993 and again from 1994 to 2000. He was then elected a trustee fellow and continued to serve in that role until his death, consulting with trustees on matters of real estate just last week. He was also a trustee at Xavier High School and Good Shepherd Social Services.

A wake will be held on Thursday, August 15 from 7:00 p.m. to 9:00 p.m. at Redden’s Funeral Home, 325 West 14th Street, New York City, NY.  A Mass of Christian burial will be held at St. Francis Xavier Church, 46 West 16th Street, New York City, NY on Friday, August 16 at 9:30 am. Interment will be at Greenwood Cemetery.
A native of Brooklyn, Williamson grew up attending St. Anselm Roman Catholic Church in Bay Ridge. He later went on to Xavier High School in Manhattan and eventually left the city to study in Switzerland and later at Georgetown University. After serving in the U.S Air Force, he returned to New York where he remained a fixture in commercial real estate for over 50 years as a developer, owner, broker, and adviser. Like so many aspects of his life, Williamson’s love of Fordham seemed a contradiction in terms. He was a graduate of Georgetown who rooted for the Rams. He was also a football player who mostly enjoyed basketball, a first-generation Irishman who invested in Belarus, and a tough-minded businessman with a soft spot for kids, said friends and associates. 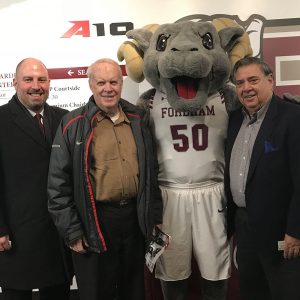 Williamson’s business partner, Paul Chester, said he was as “tenacious” in business as he was on the basketball court (though he originally played football at Xavier and Georgetown). While he was known for his New York real estate prowess, he wasn’t afraid of venturing far beyond the city. Together, the two provided financial backing for an airline based in Ireland. On his own, Williamson served as a managing director of a shipping company. And when the Berlin Wall fell, he was quick to establish contacts in the former Soviet republic of Belarus. Of course, basketball played a part there too. He formed a company that became the exclusive distributor of Spalding sports equipment in the newly formed independent Republic of Belarus. He even recruited players from the country to come to Fordham and play for the Rams.

In the 1980s, Williamson ran the New York Summer Pro League with several NBA players. He even held his own playing full court with Nate “Tiny” Archibald. Up until recently, Williamson spent each Christmas vacation at Rose Hill playing ball with friends, followed by dinner on Arthur Avenue at Rigoletto’s.

By all accounts, he was a devoted son who visited his mother frequently at a seaside retreat in Ireland, a home he would continue to visit well after her death. He kept in close contact with his extended family, and while he may have left this world a bachelor, he forged friendships that grew to become like family, said close friends.

Many friendships began at St. Anselm, including a lifelong friendship with John “Johnny Hoop” Andariese, who played basketball for the Rams from 1956 to 1960. Andariese would go on to become known as the voice of the Knicks on radio and TV.

Fordham Trustees John and Barbara Costantino knew Williamson through Fordham and also through the St. Anselm parish. He spent his last three Christmas Eves with the family.

“It started because he wanted to experience an Italian Christmas eve,” said Barbara.

She said he already knew her children from the many sports events they attended at Fordham. He arrived for the holiday with stuffed animals from FAO Schwartz and enjoyed watching the children and grandchildren help prepare the traditional seven fishes meal.

“My grandchildren fell in love with him; they called him Mister Paul,” she said.

“Paul was a tough guy, he told you what he thought and let you deal with it, but all with a heart of gold,” he said.

Costantino accompanied Williamson to many Fordham basketball games. He said Williamson wasn’t shy about debriefing the coaches of both the women’s and men’s teams about what he thought after the game. Given his intense interest, he was an informed critic, said Costantino.

Head Women’s Basketball Coach Stephanie Gaitley recalled the interactions fondly. She said she often tried to puncture Williamson’s serious demeanor with a bit of teasing to get a smile out of him.

“I valued his opinion; he wasn’t just a fan, but a friend of the team,” she said. “He had a very dry sense of humor and a tough exterior, but he was a teddy bear inside.”

Barbara Costantino said that Williamson appreciated that Gaitley made sure all the players got a chance to get on the court. It’s a quality that Williamson, as a trustee, thought was good for recruiting potential students and so that their parents saw that everyone was involved. Gaitley said she was moved when she heard this.

“I’m humbled,” she said, noting that even though he didn’t graduate from Fordham he very much became a part of the place. “Fordham is a people place and I think he appreciated that. He really stood for what Fordham is about: loyalty and character.”