skip to main content
Return to Fordham University
You are at:Home»University News»Fordham Mourns the Passing of Theology Professor Donald J. Moore, S.J., ‘an Exemplary Jesuit’
Donald Moore, S.J., talks with Patrick Ryan, S.J., the Laurence J. McGinley Professor of Religion and Society, during a 2010 interview.
Donald Moore, S.J., a professor emeritus of theology who spent time in Jerusalem and devoted much of his work to Jewish-Christian relations, died of natural causes on May 27 at Murray-Weigel Hall. He was 91.

Father Moore served as a professor of theology at Fordham from 1963 to 1967; he returned in 1969 and stayed for more than 35 years. Beginning in 2000, Moore split his time between Fordham and the Pontifical Biblical Institute in Jerusalem, where he continued his work exploring Jewish-Christian relationships and interfaith dialogue.

“We will miss Father Moore greatly,” said Joseph M. McShane, S.J., president of Fordham. “He was a gentle man and a gentleman, as well as a man who was devoted to the work of interfaith and ecumenical dialogue. His devotion to justice, moreover, led him to become one of the founders of Malcolm King College, a bold and forward-thinking evening college serving adult learners in Harlem.”

James R. Kelly, professor emeritus of sociology, a longtime friend and colleague of Father Moore, said if he had three words to describe him they would be “an exemplary Jesuit.”

“To me, he was an outstanding example of what Jesuits are supposed to be—finding the truth in all things, finding God in all things, trying to bring together the best of this world with the best of our theological understanding,” he said. 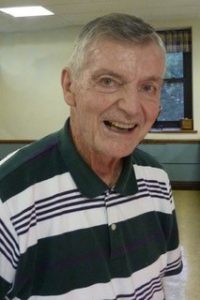 Father Moore was born in Flushing, New York, on May 11, 1929. He graduated from St. Peter’s College in Jersey City in 1950 after attending on a baseball scholarship as a standout pitcher. That September he entered the Society of Jesus, pronouncing his first vows in 1952. In 1954, he became a founding faculty member at McQuaid Jesuit High School in Rochester, New York, according to the Northeast Province of the Society of Jesus.

He was ordained into the priesthood in New York in June 1960 by Cardinal Francis Spellman. During a sabbatical in Europe, Father Moore became close with the wife and family of Franz Jägerstätter, a conscientious objector who was killed in 1943 for refusing to fight in Hitler’s army and was beatified as a Christian martyr in 2007.

His interest in Jewish-Christians relations was part of what drew him to learn about Jägerstätter and connect with his family, Kelly said.

“His interest in that area was very deep,” he said. “He became very close to the Jägerstätter family and when the mother and daughters would come visit the United States, they would stay with him at Murray-Weigel.”

Jeannine Hill Fletcher, professor of theology, said that Father Moore was an example of all that Fordham is and aspires to be.

Outside of his role as a professor, Father Moore served as the superior of the Fordham University Jesuit Community in Loyola-Faber Hall, which was then a Jesuit residence, and of the West Side Jesuit Community on West 98th Street numerous times between 1980 and 2000. He also published several books related to his studies in Jewish theology and interfaith dialogue, including Martin Buber: Prophet of Religious Secularism (Fordham University Press, 1996) and The Human and the Holy: The Spirituality of Abraham Joshua Heschel. Father Moore retired from teaching full-time at Fordham in 2005; he continued to teach as an adjunct until 2009.

Throughout his life he had a great love of sports, particularly tennis. James said one of his lasting memories of Father Moore was also one of the gentle Jesuit’s “great paradoxes”—he was someone who could be compassionate, a great listener, and someone who never complained, except perhaps on the tennis court.

“If the ball was close to being out, he would call it out. Boy, he was a competitor,” Kelly said with a laugh. “He hated to lose at tennis. It was a part of his energy.”

Father Moore became very interested in Jewish-Christian relationships and dialogue, particularly through his Ph.D. studies on Martin Buber, a Jewish philosopher who studied the “I-Thou” relationship, or people’s relationships with God.

“His academic work in Jewish authors and his ability to relate that to his own Jesuit spirituality—that type of academic work, that he was who he was,” said Harry Nasuti, professor of theology.

“Buber is addressing…so much about the human person and what the person can be—I just see it as such a wonderful stepping stone for spirituality, for my own and I hope for some of my students,” he said in a 2010 interview with Patrick Ryan, S.J., the Laurence J. McGinley Professor of Religion and Society.

Father Moore said in the interview with Father Ryan that he felt called by the Holy Spirit to join the Pontifical Biblical Institute.

“I went to a conference in Krakow in 1999 and there was a Jesuit from PBI in Jerusalem, and during his talk he mentioned [they were]closing,” Father Moore said. He remembered the priest saying, “We don’t have enough Jesuits.”

“So I spent three sleepless nights just going over [it]—if there ever was a drive of the Holy Spirit in my life I think it was at that night—it was, ‘go to Jerusalem, go to Jerusalem,’” he recalled.

“Over there, you do see things differently. I certainly got involved in the interfaith work, but I just got the impression we weren’t touching enough of the facts on the ground,” Father Moore said in the interview. “I began to search around—what can we do?”

Father Ryan said that Father Moore, who he described as someone who is “very approachable and could talk easily,” was very touched by what he saw working in the Middle East.

“Don always knew I had this interest [in the Middle East]—he had visited Jerusalem and had been struck by the things he mentioned,” Ryan said in a phone interview after Father Moore’s death.

Even when he started to slow down, becoming wheelchair-bound, Father Ryan recalled that Father Moore would continue to come to Masses at Murray-Weigel and try to help those in need through prayer.

“He would always pray for the Palestinians because he understood their plight,” Father Ryan said.

Joseph Lienhard, S.J., professor of theology, said that as both a professor and Jesuit superior, Moore was pastoral and cared for others.

“He was pastorally concerned for his students … gentle, cheerful, personable, not confrontational, clearly devoted to his Jesuit life,” he said.

Mary Callaway, a theology professor, said that his impact can still be felt, particularly through the courses he created.

“Don created the Death and Dying course to combine academic study of theological and cultural aspects of death
together with practical experience with people who were dying,” she said. “That course has enriched a generation of pre-meds and others.”

Fletcher said that she wanted to take this moment to make sure that his legacy would be carried on.

“Don’s passing is a moment of pause within the community in order to ensure that we keep doing the kind of work he kept doing as a member of the Fordham community,” she said.