skip to main content
Return to Fordham University
You are at:Home»Editor's Picks»Fordham Mourns the Passing of Pope Benedict XVI

Pope Benedict XVI, a fierce defender of Catholic Church doctrine who stunningly resigned the papacy in 2013, died on Dec. 31 at age 95.

Known for his theological brilliance, Benedict drew praise from many Catholics for his commitment to church orthodoxy amidst rising secularism. He also drew criticism during his papacy for accusations of corruption in the Vatican Bank, and what many deemed a too-little-too-late response to the clergy sex abuse crisis that rocked the church. When he retired—the first pope to do so in 600 years—he was given the title of pope emeritus.

Before he was elected pope in 2005, Benedict, a German theologian who was then Cardinal Joseph Ratzinger, served as head of the Vatican’s Congregation for the Doctrine of the Faith—a post he was chosen for by Pope John Paul II in 1981. In that role, he reasserted a classical stance on the Catholic faith in the face of pastoral experimentation and growing religious pluralism.

During his 2008 visit to the U.S., Pope Benedict delivered an address to Catholic educators at Catholic University in Washington, D.C., in which he said “Education is integral to the mission of the Church to proclaim the Good News. First and foremost every Catholic educational institution is a place to encounter the living God who in Jesus Christ reveals his transforming love and truth.” 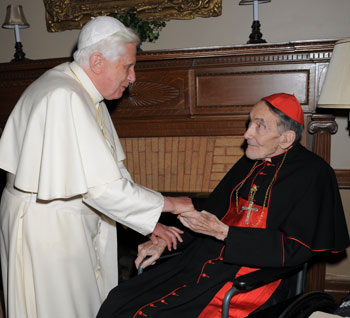 Pope Benedict XVI’s funeral will be held on Jan. 5 in St. Peter’s Square, the Vatican said, with Pope Francis presiding. His body will be laid in St. Peter’s Basilica on Monday so that the faithful can pay their respects.

Below, Fordham faculty share their thoughts on Pope Benedict’s influence and legacy.

David Gibson
Director, Center on Religion and Culture
Author of The Rule of Benedict: Pope Benedict XVI and His Battle with the Modern World

Benedict XVI is being remembered, and revered by many, for his role as pope and the progress and controversies that accompanied his eight-year pontificate. But his chief legacy as pope will likely be his decision to resign the papacy, the first pope to do so in 600 years. That decision broke a certain mystique that had built up around the popes, and it freed his successors to step down when they see fit.

But beyond that it should be noted that his real legacy will be the nearly 25 years he spent as the chief doctrinal enforcer to his predecessor John Paul II. As Cardinal Joseph Ratzinger, the man who would be elected Benedict XVI shaped the conservative form that marks Catholicism today, and will for many years to come. His intellectual and ecclesial patrimony is arguably more influential than that of John Paul himself.

Pope Benedict was a gifted scholar and brilliant theologian. Yet his thinking at times could be abstract and distant from the everyday lives of many Catholics. He prioritized a Eurocentric understanding of Catholicism over adaptation to local cultures. He saw Western European culture as the norm for Catholic worship and theological expression. For example, on his 2009 journey to Cameroon and Angola, Benedict criticized condoms as aggravating the AIDS epidemic, despite the fact that the continent was an epicenter for the disease’s massive suffering and death. During his 2011 visit to the African country of Benin, organ music was used at the Masses he celebrated [as opposed to drumming and traditional dance]because he believed it to be more consistent with the dignity that was due a papal liturgy. I believe that history will show that Benedict leaves a complicated legacy as a leader who was a brilliant scholar who struggled to appreciate the global and cultural diversity of the Catholic Church.

Early in his career Joseph Ratzinger earned a reputation as an accomplished theologian with expertise in early and medieval European Catholic theology. He became a respected contributor to the proceedings of the Second Vatican Council and a proponent of a dialogical approach to revelation, the sacraments, and the church. But in the decades that followed the council, he became increasingly critical of the use of dialogical deliberation and decision-making in the church in practices of collegiality and synodality, and in democratic societies.

As head of the Congregation of the Doctrine of the Faith, he promoted the investigation, interrogation, and disciplining of many theologians linked with progressive currents in theology in Europe, North America, and in the Global South focused on liberation, inculturation, and religious pluralism.

Since Benedict has retired, the church has, under the leadership of Pope Francis, been returned to the position of the majority of bishops heralded at the Second Vatican council that sought to reform the church by engaging in open and honest dialogue in the church and by promoting receptive dialogue with the modern world, with members of other Christian churches, of other religions, and by ushering a new global vision of the church and a polycentric understanding of Catholicism.