skip to main content
Return to Fordham University
You are at:Home»University News»Fordham Mourns the Passing of Monica Kevin, O.S.U., Longtime Faculty Member and Adviser
Photo courtesy of Ursuline Sisters of Tildonk
Monica Kevin, O.S.U., a three-time Fordham graduate, former biology professor and dean at the University, and the first woman to lead the Faculty Senate, died on March 24 at the Maria Regina nursing home in Brentwood, New York. She was 99.

“Fordham has lost a giant in Sister Monica Kevin,” said Joseph M. McShane, S.J., president of the University. “She was a scientist of great faith, a teacher of great wisdom, and a friend of great compassion. She served Fordham with deep devotion and love for half a century.”

Sister Kevin, known by all as Sister Monica, was born on March 19, 1920, in Ireland. In a video interview filmed in 2013, she said she knew of nuns whose parents had pushed them to join the convent. But for her, it was a deliberate decision. In 1937, she entered the Ursuline Sisters of Tildonk at Blue Point.

“I’ve never regretted it,” Sister Monica said. “There were good times and not so good times. But there were always those magic moments that make up for that.”

She lived to create almost a century of moments, many of them at Fordham. She was a scientist and professor who studied mouse chromosomes and crustaceans. She knitted with students and sewed Spellman Hall’s altar linens. She cheered for Fordham’s basketball teams from the gym stands. And she was famous for her homemade scones and Irish soda bread, which she shared with people across the campus community.

Her compassion, said those who knew her, shone through in both obvious and subtle ways.

“I asked her why there were no currants in her Irish soda bread,” Patrick J. Ryan, S.J., professor of religion and society, said when giving the homily at her funeral Mass on March 28. “She told me that Father Joe Dolan had diverticulosis and the currant seeds weren’t good for him.”

Sister Monica loved the opera, reading, painting, the Ursulines, the Jesuits, and her family, who now reside in England. And she loved Fordham, said Judith Kubicki, C.S.S.F., associate professor of theology—so much that it “flowed through her veins.”

“I used to refer to her as ‘Lady Fordham’ because she so embodied Fordham. She was probably,” Sister Kubicki said, laughing through her words, “more Jesuit than the Jesuits.”

In 1948, Sister Monica earned a bachelor’s degree in mathematics—one of a trio of Fordham degrees. In 1961, she received a master’s degree in biology. Three years later, she earned a doctorate degree with a dissertation in cytology/cytogenetics. 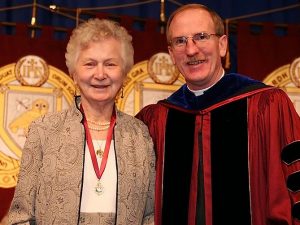 After teaching in Brooklyn and Hartford diocesan schools and at St. John’s University, Sister Monica joined Fordham’s biology department in 1967. She went on to also serve as dean of summer session for 12 years, as president of the Faculty Senate, as director of the pre-med/health program, and as a member of multiple University committees.

Sister Monica was also the first woman to serve on Fordham’s athletic advisory board. In the 1970s, she helped the board hire athletic directors and head coaches for the football and basketball teams.

For her 40 years of teaching, research, and service, Father McShane presented Sister Monica her second Bene Merenti medal in 2007.

“Monica wasn’t just into soda bread and scones,” Father Ryan said. “She was a good teacher and an acute scientist.”

In Her Nineties, A Zest for Life

But their relationship changed. “Who would’ve known that we would become great friends?” Sister Kubicki said. 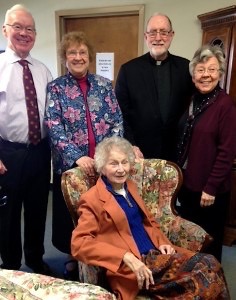 She recalled other things about her friend: an afternoon spent together at an Irish pub in Yonkers, a red outfit she’d bring out on special occasions, and her fondness for faculty parties.

“She was running around like a person two decades younger than she was,” said Sister Kubicki, who is in her seventies. “She was full of energy—loved to do new things.”

Sister Monica retired from her last Fordham position—counselor to retired faculty—in 2013. But she stayed connected to the community, living at the Rose Hill apartments and attending University events until April 2014.

That same month, she suffered a stroke while attending mass at the University Church. Even though she was stuck at St. Barnabas Hospital, she held onto her sense of humor, said one of her hospital visitors—John Carroll, associate vice president for public safety at Fordham. Sister Monica asked him to keep her stroke a secret from her fellow sisters, who were waiting outside her room.

“She said to me, ‘Hey John, don’t tell them about any stroke because I have summer tickets to go to Ireland, and they won’t let me go if they find out about this,’” Carroll recalled.

And he complied. “Monica, I’m not telling them nothing,” he said.

In the days before her death, arthritis and almost a century of living were taking their toll on her body, said Sister Monica’s longtime friend, Mairead Barrett, O.S.U., president of the Ursuline Sisters of Tildonk, who sat by her friend’s bedside and squeezed her hand.

But she also recalled the Sister Monica she had known over the past 50 years: the one with the “feisty personality” and a deep love of life.

“She’d be getting up, doing the jig,” said Sister Barrett, even as she got on in years. “[Sister] Meghan would put on the Irish music and say to me, ‘Oh my God, don’t let her fall down the stairs while we’re doing the jig! She just had this energy—this love of life, this joie de vivre.

“She knew how to take every moment and live.”

Joe DiBari contributed to this story.