Sonia Burke-Quarless, a caring yet demanding Fordham assistant women’s basketball coach who was known for her true love of the game, died on July 16 at her home in Yonkers. The cause was cancer, according to her partner Sherlon Quarless. She was 53.

Burke-Quarless joined the team in July 2017 after 13 seasons with Manhattan College. She served as a recruiting coordinator for domestic recruits, worked individually with players who play the forward and center positions, and scouted the strengths and weaknesses of opposing teams. During her time as coach, the team posted a 82-36 record and went to postseason three times, once to the NCAA and two to the WNIT.

Women’s basketball coach Stephanie Gaitley said that Burke-Quarless’ death came as a surprise and that the team and staff are devastated by her loss. The team was aware of her diagnosis, but her prognosis had improved in the spring after she responded to treatments.

“Her strength as a coach was, she was very caring. She was demanding but not demeaning. The kids had such a great respect for her, because they could see that she had an unbelievable love for the game,” she said.

Burke-Quarless was loved by the students, Gaitley said, because they knew she would do anything for them and challenge them to perform at their peak.

“Sonia made an incredible impact in the four years that she’s been here, and we certainly will miss her, but her legacy will live on with everything she taught each and every one of us,” Gaitley said.

A Doting Mother and Partner 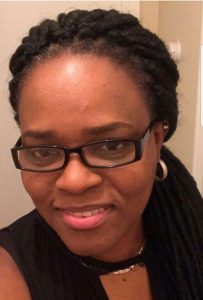 Sherlon, who was Burke-Quarless’ partner for 19 years, said that Sonia was adamant about keeping her private life separate from her work, which was nonetheless all-consuming. She joked that she competed with basketball for attention.

“That’s all she talked about. Laying in bed, and having a conversation, it wasn’t about the future or some trip. It was always something about Fordham. Truly, basketball was her everything,” she said.

Sonia’s devotion to the sport was partly the reason why she kept her struggles private, she said. Although her fight with cancer was well known to the team and the Fordham community, she didn’t share a recent turn for the worse.

“She was pushing me to improve with career moves. She would say, ‘I share all your degrees,’ because she forced me to go back to school,” Sherlon said.

A Life Built Around Sport

A 2001 graduate of Spring Hill College, Burke-Quarless brought a wealth of experience with her, having worked as interim and associate head coach at Manhattan College, and as an assistant coach at Saint Francis University during the 2002-3003 season when that team won the Northeast Conference.

A native of Barbados, she served as captain of the Barbadian national team that captured goal at the 15th Caribbean Basketball Championships in 2000. As a player at Spring Hill, she led the Badgers to the Gulf Coast Conference championship and an appearance in the NAIA Tournament that same year. After graduating with a bachelor’s degree in management, she earned a master’s degree in public administration from Capella University in 2015.

Allie Keller, director of basketball operations at Fordham, noted that even when treatments kept Burke-Quarless from games and practices, she was still thinking of basketball.

“She always sent a good luck text to the team in our large group text and to the coaches. She would also text me suggestions and commentary during the game to pass along to the rest of our coaching staff at the next time out,” she said.

“I will greatly miss her as a colleague, mentor, and friend.”

Ed Kull, director of athletics, said losing Burke-Quarless was a reminder that although wins and losses are a big focus of the program, they are not all that matters.

“Our student-athletes spend more time with our coaches and our administrators and any other aspect of their college,” he said

“I think everybody is taking this so hard because of what a great person and great human being Sonia was. Outside of a great coach, she was a great mentor and a great leader to our young student-athletes.”

A Model for Being Fully Present

Anna DeWolfe, a rising junior at Fordham College at Rose Hill who is the team’s co-captain, said she’d always hold onto the mantra Burke-Quarless repeatedly shared, “Be present where your feet are.”

“One day last year, I had a huge paper due for class and I was so stressed out because I was at practice. She just kept saying, ‘Be present and practice, forget about school right now and focus on this. And when you’re in class, only focus on class,” she said.

“It was really good advice from her, especially because of what she was going through. She was so present where her feet were when she was at basketball. All she wanted to do was make an impact on our lives and coach us and enjoy her time with us.”

As a forward on the team, fellow captain Kaitlyn Downey, a rising senior at the Gabelli School of Business, worked one on one with Burke-Quarless. Before the season, she and Downey brainstormed acronyms they could use to motivate the team; the one they settled on was “Energy Attitude and Toughness, or EAT”

She would always say, ‘Let’s eat, Let’s have a good day, let’s eat.” And that was just a way to remind us of all of these key qualities that we should try to hold onto,” she said.

Making a Big Mark in a Short Time 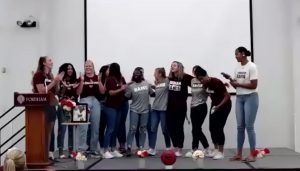 Members of the women’s basketball team paid tribute to Burke-Quarles at the end of a memorial service by singing “Lean On Me.”

In a ceremony on July 20 filled with laughter and tears, roughly 100 members of the women’s basketball team and staff came together to honor Burke-Quarless with fond memories and anecdotes about her.

Her stepson Justin Smith thanked the members of what he said was her second family, noting how lucky she was to be able to do what she loved for so many years.

“She didn’t want a service or anything, but we had to, right? We had to come together and celebrate her,” he said.

The service, which took place at the Rose Hill campus, concluded with a raucous slide show of videos and photos of Burke-Quarless, followed by a singalong on stage of “Lean on Me” by members of the team.

“Coach Sonia came to Fordham just four years ago, and in that time, she secured a lasting place in the hearts of all with whom she worked, most especially our student-athletes,” he said.

“I ask you all to join me in keeping her colleagues, family, friends, and student-athletes in your hearts and prayers.”

Burke-Quarless is survived by Sherlon; three stepsons, Stephen, Justin, and Donte; a grandson, Stephen Jr., and a niece, Tamya.