The University mourns the death of Patrick Hynes, former clinical associate professor in the Gabelli School of Business, who passed away May 22 at the age of 84. 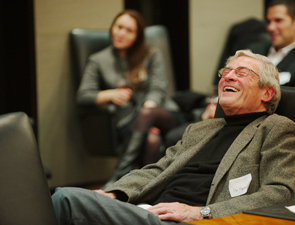 Hynes at a Theatre Program event.

He also remained an active member of the University community well after his retirement in 2002 by attending lectures, art openings, plays, conferences, spiritual retreats, meditation sessions, and Mass.

Last fall, Hynes was still enrolled as student at the School of Professional and Continuing Studies’ (PCS) College at 60 program.

“Pat opened my world as he did for so many others, by introducing me to new people, new places, and new experiences,” said Flicker. “There was always light and laughter where Pat was, as well as intractable arguments owing to his stubbornness, of course.”

Flicker called Hynes a “gifted and talented mentor” who was dedicated to the University and its students, many of whom stayed in touch with him years after they graduated.

“He joyfully shared with his students his knowledge and love of technology,” she said.

He was born Patrick J. Hynes III on March, 23, 1932 in Chicago to a family of florists who had been selling bouquets in the city since the Great Fire. He received his commission in the Army on graduating from John Carroll University after a four-year ROTC enrollment. He served in the Army from 1954 to 1961 where he was deployed to Korea and France in the U.S. Army Signal Supply Agency as an assistant communications officer. He rose to the rank of captain.

On returning to the United States, he enrolled at the University of Pennsylvania’s Wharton School of Business, where he received his MBA in 1962.

Hynes arrived in New York that same with his wife, the late Marlene Ganse, and began to work in the oil industry as a computer analyst. He soon became active with New York Road Runners and its world famous marathon. He was a close friend of Fred Lebow, the club’s long-time president.

In the beginning he volunteered at the finish line. But as the race grew from a few thousand New Yorkers racing in Central Park to tens of thousands from around the globe racing in all five boroughs, he began gathering volunteers and going around the city to help out runners who found themselves stranded when they dropped from the race.

“He was a taskmaster, great at pulling people together, and great at taking care of all the details—that was the military in him,” said Glenn Redpath, associate director of admissions at PCS and a long distance runner.

Redpath said that many of the streets along the route were barricaded, but Hynes knew how to charm police officers with a smile and a fistful of Road Runner t-shirts as credentials.

His love of running was matched only by his love of flying, said his longtime friend and companion, Sheila Ross, former senior designer at the University’s Office of Marketing and Communications.

“If he had any regret in life, it was that he never got his pilot’s license,” said Ross.

After his wife passed away in 1998, Hynes became more contemplative and spiritual, said Ross. He was soon a regular at Fordham’s weekly Zen sittings at the Blessed Rupert Mayer, SJ, Chapel.

“He started to go on every kind of retreat he could go on,” said Ross. “He was always a devout Catholic, but he wasn’t one for the rules and regulations. He was a very free spirit.”