Leo Hoar, Ph.D., a professor emeritus of modern languages whose devotion to the study of the Spanish writer Miguel de Cervantes was matched only by his passion for teaching and love of Fordham, died peacefully in his sleep on June 20 after a long illness. He was 91 years old. 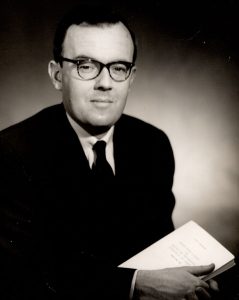 “Leo was an extremely active and committed member of the modern language and literatures department,” said Andrew Clark, Ph.D., the department’s current chair and professor of French and comparative literature, who worked with him from 2003 to 2015. Clark noted that Hoar served on multiple committees and advocated in particular for international education. He was also an active participant in Fordham’s ROTC program and a moderator for the university’s sailing team.

Clark said Hoar’s true passion was Cervantes, widely regarded as the greatest writer in the Spanish language and revered for The Ingenious Gentleman Don Quixote of La Mancha, which he penned in the early 17th century. When Hoar joined the faculty in 1963, he took over the then 11-year-old Fordham Cervantes lectures, which had enjoyed international acclaim as the only continuous event of its kind devoted to Cervantes. He oversaw multi-day conferences held to commemorate 25-, 40-, and 50-year anniversaries of the lectures. 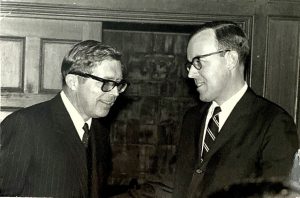 A native of Worchester, Massachusetts, Hoar served in the U.S. Army from 1953 to 1955 and was discharged with the rank of second lieutenant. He earned a Ph.D. in Romance languages and literatures from Harvard University in 1965. He started teaching at Fordham as an instructor in 1963, became an assistant professor in 1965, and was promoted to associate professor in 1970.

In 2003, he was honored with a Bene Merenti medal for 40 years of service at Fordham and lauded as an enthusiastic and demanding teacher who developed innovative teaching methods and helped organize study abroad trips to Spain. In 2015, he retired after 53 years of service to the University.

A Home at Rose Hill 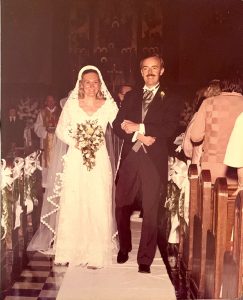 Georgine and Leo Hoar at the University Church on July 4, 1976

Even after he retired, Hoar regularly visited the Rose Hill campus and was a fixture on the fifth floor of Faber Hall, where the department is located. From that vantage point, he could gaze down on the University Church, where he and his wife Georgine were married on the United States bicentennial, July 4, 1976.

The two met at Fordham in 1966, when Georgine was teaching full-time for the department. They two bonded over a love of the works of the novelist Benito Pérez Galdós; he was a focus of her master’s thesis, and he would go on to publish Benito Pérez Galdós y la revista del movimiento intelectual de Europa, Madrid, 1865-1867 (Madrid, 1968).

They honeymooned in Canary Island Gran Canaria, the birthplace of Galdós. After their children were born, Georgine continued to teach as an adjunct; she also served as a moderator for the foreign language society Alpha Mu Gamma and worked with Hoar on the Cervantes lectures.

When she was also honored for 40 years of service in 2017, it was estimated that between her and her husband, the two had 100 years of teaching experience between them, adding up to 200 semesters and about 12,500 students.

“Fordham is really our home. It’s where we met, and we never counted the years. Leo always said that he would just never retire. It was the love of his life to teach the students,” Georgine said.

“He was known as a tough grader, but fair, and the students always enjoyed him because he had a wonderful sense of humor. He absolutely enjoyed what he did. If he had a 10 a.m. class, he was in his office at 8.”

Cherishing the Life of the Mind 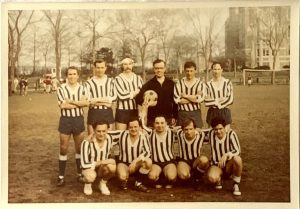 In the early 1970s, Hoar, center in black, played soccer with colleagues on Edwards Parade.

His daughter Jennifer Hoar said she spent so much time as a child with her father on the Rose Hill Campus that when she moved out to Los Angeles, she attended—and made friends at—a Fordham alumni event even though she went to Georgetown University. She said she never met someone who was as passionate about his work as her father.

“We’d be on vacation, and he’d have a briefcase and bring it out on the beach with a legal pad and pen and books,” she said

“I didn’t think it was weird because that was how he was himself. It was just, ‘I enjoy the life of the mind so much that it’s relaxing for me to be on the beach reading and writing and thinking and getting ideas.’”

Although Hoar was well known for his intellectual prowess, Jennifer said that something less known about her father was that he never missed an opportunity to express his feelings.

“That really spoiled me for life. I’ve met very few people, and certainly few men, who are not only able to identify with such specificity and precision their feelings but are also unafraid to speak them. That was a massive gift he gave me,” she said. 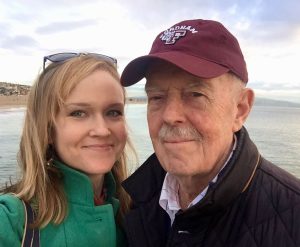 Like his sister, Hoar’s son Leo Hoar III, Ph.D., GSAS ’04, spent a great deal of time at Rose Hill and remembered being fascinated by his father’s commencement robes, which he considered a “full-out wizard outfit” when he was little. He returned to Rose Hill in 2002 to earn an M.A. in English and eventually earned a Doctor of Philosophy in English language and literature/letters at the University of California, Irvine.

During those two years at Fordham, he developed a routine where he’d periodically stop by his father’s office, and because the elder Hoar was often there well past office hours. He’d find himself chatting with his father and his office mate at the time, the late Paul Trensky, Ph.D., a professor of Russian literature and comparative drama.

“When Trensky was there, the three of us would just sit around, and they would tell sophisticated jokes and I would pretend to laugh at them because I had no idea what they were talking about,” he said laughing.

“They’re some of my favorite memories of my life, to be honest. I didn’t tell myself, ‘I’m going to Fordham so I can hang out with my dad,’ but it was this amazing kind of side benefit.”

When he graduated in 2004, his father was there to give him his diploma. The younger Leo works in the private sector now but has no doubt that his father inspired him to get a Ph.D.

“I think it’s because the model that he put forward was so irresistible. It was so clear to me growing up that he absolutely loved every single day that he went to work,” he said.

A Legacy that Keeps Alumni Connected

Mary Ellen Kahn, GSAS ’73, earned an M.A. in Spanish literature with Hoar as her professor. Hoar’s enthusiasm for Gustavo Adolfo Bécquer was so contagious, she said, she was inspired to delve deeper into the poet’s work and do more research on his influences. Kahn said Hoar also made medieval poetry, which some consider a bit obscure and dry, come alive 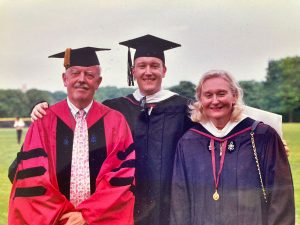 Leo Hoar III, center, with his parents at Rose Hill in 2004

“I consider him kind of a Renaissance man because he had a way of linking music to the literature that he taught,” she said.

She harkened back to Hoar’s lessons for 30 years in her work as a high school Spanish teacher in Rockville Centre, New York.

“I was able to bring my enthusiasm, which I had caught from Dr. Hoar to my students to get them excited about poetry and literature,” she said, noting that her fond memories of Fordham inspired her to join a University Women’s Giving Circle.

“One of the reasons that I keep supporting Fordham is because of my memories of Dr. Hoar.”

A Life Filled with Joy

Arnaldo Cruz-Malave, Ph.D., a professor of Spanish and comparative literature, said Hoar was an important member of the “MLL family.”

“I remember him most toasting to others and laughing. His generosity on these occasions and his great sense of humor, which were a balm during difficult times, is what I will remember and cherish most about him,” he said.

Clark remembered Hoar as an avid sailor who sailed out of the Bronx’s City Island with his friends and family. When Clark became chair of the department, he said, Hoar gave him a bottle opener, a bottle of champagne, and a note that captured his spirit quite well—’Enjoy the bubbly, and remember what Napoleon said about champagne: In victory you deserve, it and in defeat you need it. In your case, it’s victory!”

“One of my favorite memories is when Leo and Georgine returned to Fordham for a spring departmental party in 2017. They were impeccably dressed, deeply gracious, and filled with youth. With a live Mariachi band playing, the two started dancing together with some pretty impressive moves. It inspired others to join in. You could see that there was great love between them and a life filled with joy, appreciation, and happiness,” Clark said.

“We will miss him and are blessed with the energy and contributions he gave to the department over many decades.” 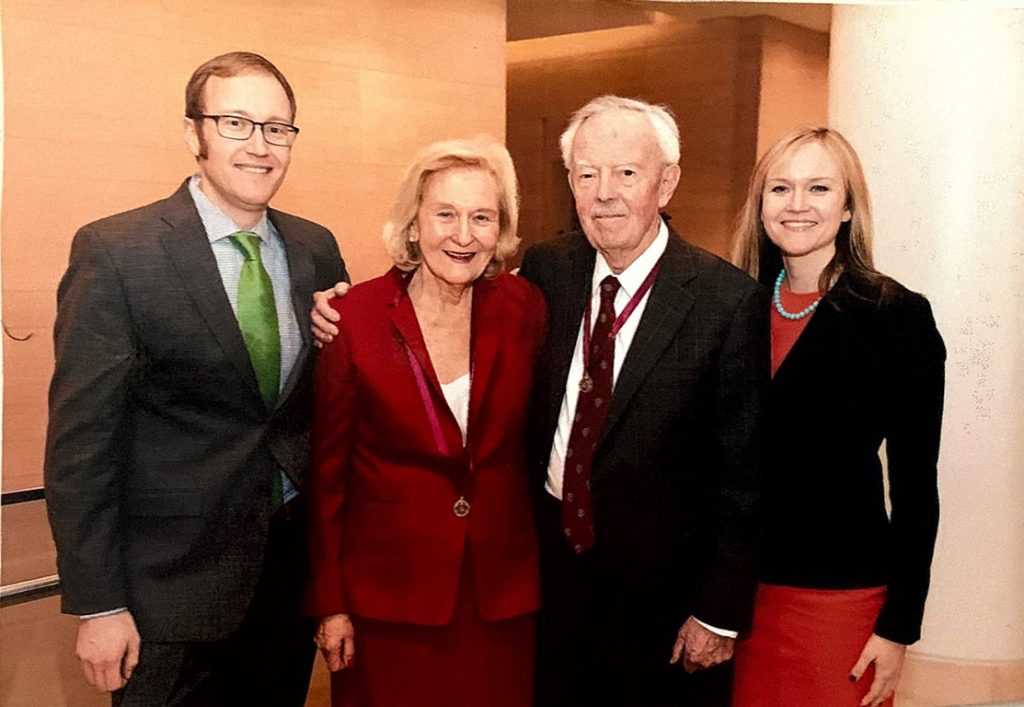 Leo Hoar in 2017, at the Convocation ceremony where Georgine Hoar, second from left, was honored with a Bene Merenti medal for 40 years of service.

Hoar is survived by his wife, Georgine Barna Hoar; his daughters Jennifer Hoar and Judith Tietz; his son, Leo Hoar III; his sister, Nancy Gunning, and many loving nieces and nephews.

A wake will take place at McGrath Funeral Home in Bronxville, New York, on Thursday, June 30, from 6 to 8 p.m. A Mass of Christian Burial will be held at St. Joseph’s church in Bronxville on Friday, July 1, at 10:45 a.m.