Albert Auster, Ph.D., a scholar of film and television who helped establish the prestigious Sperber Prize at Fordham, died on March 28 at Memorial Sloan Kettering Cancer Center. He was 82, and the cause of death was sarcoma.

Auster joined the Department of Communications and Media Studies as a visiting assistant professor in 1996. He was appointed full professor in 2015, a position he held until he retired in 2020. He served as associate chair of the department at the Rose Hill campus from 2002 to 2003, and from 2003 to 2008 at the Lincoln Center campus.

Auster was born in Brooklyn, grew up in the Bronx, and graduated from City College in 1961. He earned a Ph.D. in history from S.U.N.Y. Stony Brook in 1981, and taught at Brooklyn College and SUNY College at New Paltz from 1982 to 1995 before joining the Fordham faculty.

At Fordham, he focused on film and television. He published several books, including American Film and Society Since 1945 (ABC-Clio, 2018), thirtysomething: Television, Women, Men and Work (Lexington Books, 2008), Turn On, Tune In… Television and Radio in the U.S.A. (Altair Publishing, 1994), How the War Was Remembered: Hollywood and Vietnam (Praeger, 1988), and Actresses and Suffragists: Women in the American Theater, 1890-1920 (Praeger, 1984).

In published papers and interviews, Auster weighed in on subjects as diverse as Seinfeld, Frank Sinatra, and the differences between spies in movies and in real life.

In 1999, he was instrumental in launching the Sperber Prize, which is given to authors of biographies and autobiographies of journalists. He served as chairman of the award committee for 20 years. 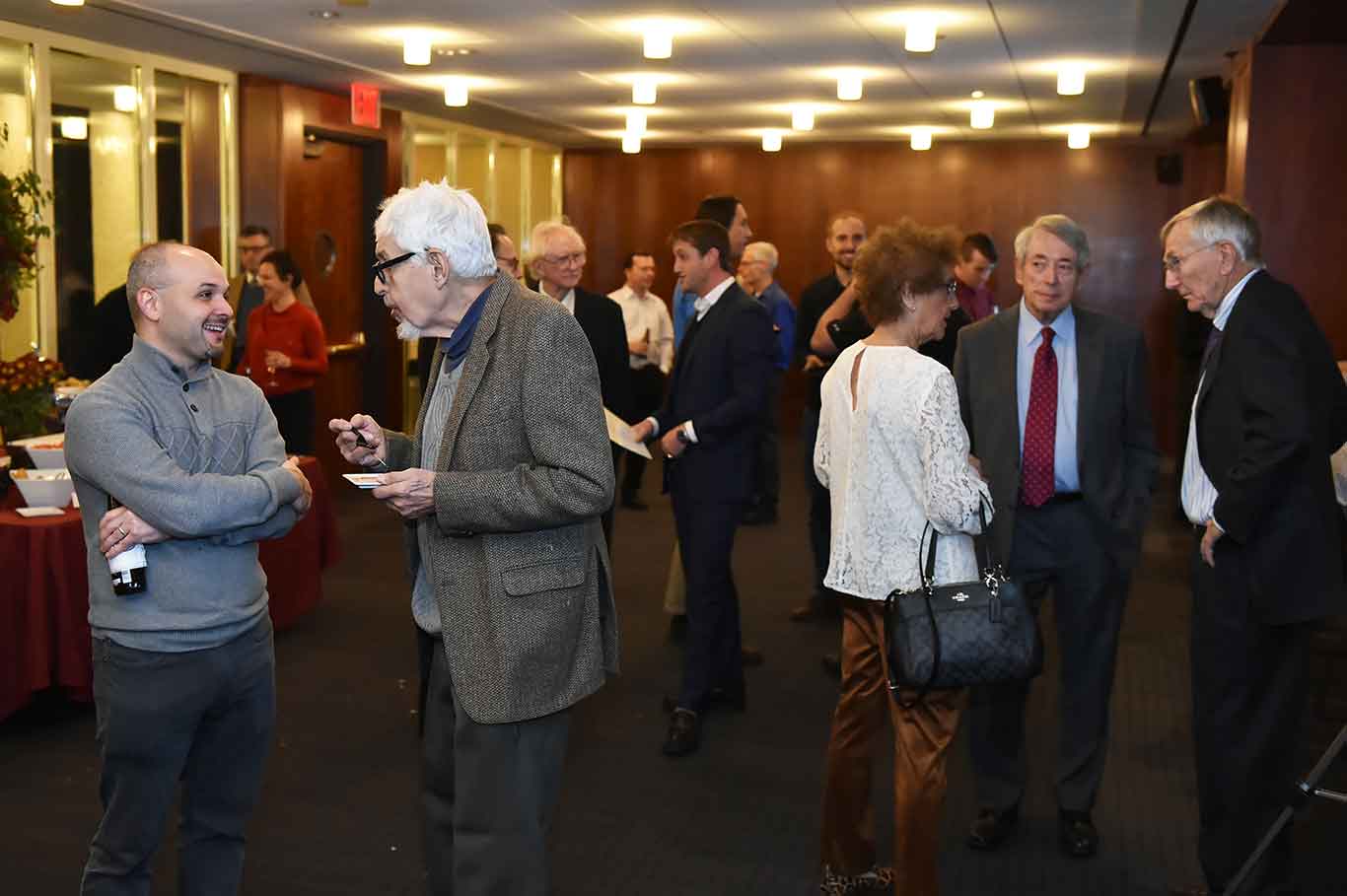 Brian Rose, Ph.D., a professor of communications who was director of the award following Auster, called him a treasured colleague whose good judgment and empathy were valued on both campuses.

“He brought a tremendous sense of intellectual energy and wide historical background to his media classes, which clearly engaged several generations of students at Fordham. Al’s warmth, generosity, and good humor will be sorely missed,” he said.

Jacqueline Reich, Ph.D., a former professor of communications and media studies who is now dean of the School of Communication and the Arts at Marist College, echoed Rose and said that Auster was fundamental in bringing the Sperber Prize to Fordham.

“His tireless advocacy and devotion to the program was so appreciated by the Sperber family in Anne Sperber’s memory,” she said, noting that he was a charming, gentleman and devoted teacher.

“One of my favorite quotes about him from a student evaluation was “‘I wish he was my grandpa.’”

In 2008, Auster organized, along with Paul Levinson, Ph.D., a conference dedicated to the HBO show The Sopranos. Levinson called him a “one-of-a-kind professor and human being who had a heart of gold, a smile that would light up a room, and an encyclopedic knowledge of everything he taught and talked about.” Levinson recalled asking Auster at the last minute to serve as an associate chair of the department at the Lincoln Center campus. Auster didn’t hesitate, he said.

“I would call him anytime I had an issue that needed discussion, and he always took the call, including at night and weekends. I knew I’d miss him when he retired, and I did. I know now I’ll miss him very much more,” he said. 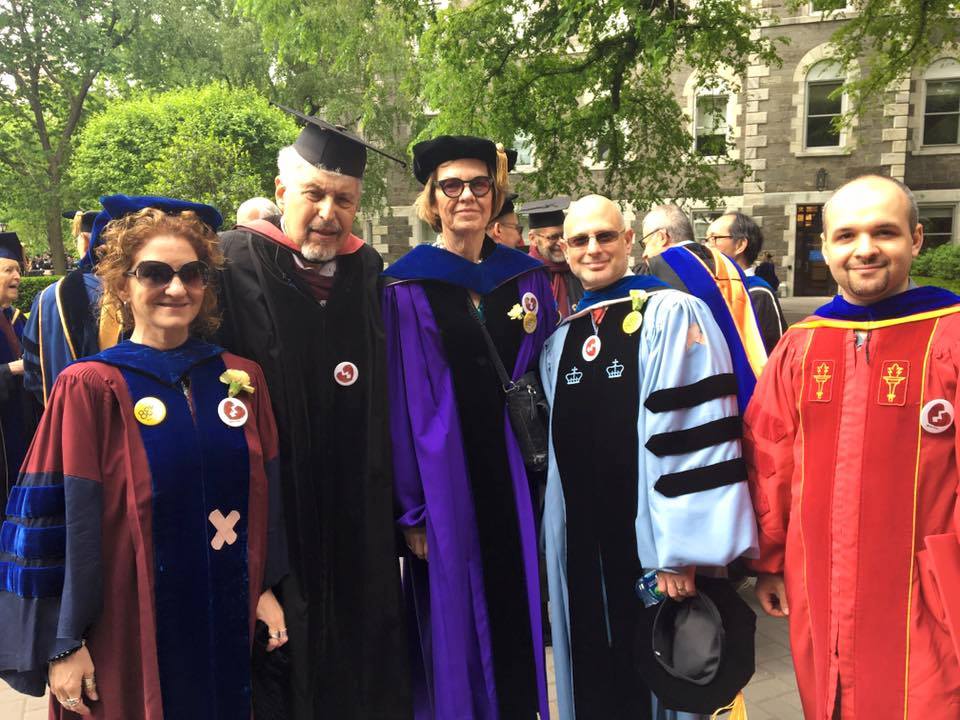 Thomas McCourt, Ph.D., a retired professor of communication and media studies, credited Auster with making him feel welcome when he first moved to New York City and was feeling out of his league.

“He had a wonderfully dry sense of humor and keen sense of the absurd. We spent hours and hours talking about jazz guitarists!” he said.

“I learned that a number of junior faculty in the department held an informal poll as to which senior colleague they would like to accompany on a cross-country road trip, and Al was the hands-down winner because he had so many great stories to tell. Al was the definition of a mensch.”

In 2016, Auster was recognized for his service at the University with a Bene Merenti medal. At the ceremony, he was lauded for being “a classic New Yorker, exemplifying the wit and heart of the city.” His citation praised him for his significant contribution to his field and to Fordham:

“Dr. Auster’s significant body of work details the history and impact of film and television on the American landscape. His wide-ranging interests are reflected in his many books and articles that have helped shape critical debates on how politics and media interact. In his studies of film and TV programming focusing on the Vietnam War, Dr. Auster has portrayed the complexities and contradictions of creators as activists in an industry typically focused on ratings and financial results,” the citation read.

“Through the years, numerous students have attested to the spirit of inquiry and openness that distinguishes his teaching. His classes provide a broad sense of context in which to address the fundamental questions of philosophy and ethics in past and present media. In both his life and work, Dr. Auster reflects the best aspects of Fordham and New York City.”

Auster’s wife Susan Hamovitch said he had recently begun working on a memoir that he called bubbenmeises, an intentionally misspelled Yiddish word that he defined as “Referring to a number of meanings: a false story, a story that is so eccentric as to be meaningless, or a story intended to divert from the real story. But are more than that because they have defined me [him]and my family.”

In the course of working on it, he’d realized that he was profoundly affected by the Holocaust, which resulted in the murder of his grandmother, aunts, and uncles. After graduating from City College, he worked in radio, for the Canadian Broadcasting Company and WBAI in New York City. It didn’t pay well enough though, she said, so he reluctantly went back to school to earn a Ph.D. in history. He would become a student of Hitler, Stalin, and the Jim Crow era of the Deep South, she said in remarks she delivered in a eulogy.

“His jam though, was to probe historical themes as contemporary American culture, mainly movies, portrayed them,” she said.
“How did film portray the Holocaust?  The War in Vietnam?  Jewish mores?   For his graduate thesis, the question was, which of Hollywood’s stars were diehard suffragists?”

Auster’s life can be summed up as passionate and emotional, she said.
“He breathed the history of this country, from the Suffragist movement to race relations, from John Ford to Jerry Seinfeld, with pride, annoyance, rage and love, I suspect due to the bubbenmeises he’d lived through,” she said.
“He approached his end as he had his life, with kindness, discipline, and a sense of responsibility.  He was an extraordinary man.”

Funeral services will be held Friday, April 1, at 11 a.m. at the Kerhonkson Synagogue in Kerhonkson, New York. The service will be streamed live on Zoom. His wife Susan Hamovich will be sitting shiva on Sunday, April 3 and a shiva minyan at 3 pm. Anyone who would like to share memories of professor Auster are asked to e-mail them to Susan at sooznham@mac.com. In lieu of flowers, the family asks that you consider making a donation to the Met Council on Housing and/or to Kolot Chayeinu.