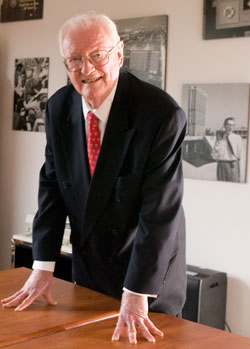 Robert V. Remini, Ph.D., FCRH ’43, a former Fordham professor who served as official historian of the U.S. House of Representatives, died on March 28. He was 91.

Remini’s career as an educator and historian spanned more than six decades, beginning in 1947 at Fordham University, where he taught for nearly 18 years.

A professor emeritus of history at the University of Illinois at Chicago, he was the author of more than 20 books, including several biographies of 19th-century American politicians—most notably Andrew Jackson. The final installment of Remini’s three-volume biography of the seventh president of the United States,Andrew Jackson and the Course of American Democracy, 1833–1845, won the 1984 National Book Award for nonfiction.

Remini was born and raised in New York City, the son of a credit manager for a coal company. He attended Fordham University on a scholarship from the Mother’s Club of Long Island and intended to become a lawyer—“not because I was intrigued by the law,” he once said, “but because it seemed like a worthy profession then for a child of the Great Depression.”

Instead, he enlisted in the U.S. Navy after graduating from Fordham in 1943.

“I was commissioned an ensign and assigned to a ship, and you know what? All I did was read history,” Remini told FORDHAM magazine during a 2008 interview. “Suddenly I realized, ‘I don’t want to be a lawyer. I want to be a historian.’ When I told my parents, they were shocked. ‘Oh!’ they said. ‘You will starve.’”

After three years of Navy service, Remini enrolled at Columbia University, where he studied with Richard Hofstadter, and became an instructor at Fordham. In 1951, he earned his doctorate at Columbia and was named assistant professor of history at Fordham, where he continued to teach until 1965.

Richard K. MacMaster, Ph.D., FCRH ’58, GSAS ’62, was one of Remini’s Fordham students. In a letter published in the fall 2009 issue of FORDHAM magazine, he recalled his former professor’s knack for “making American history an interesting story.”

“I remember him as a remarkably kind man, genuinely interested in his students and encouraging of our efforts at research,” wrote MacMaster, a retired history professor and co-editor of the Journal of Scotch-Irish Studies. “He had the uncanny ability to present the Age of Jackson with such immediacy that you might think he’d had lunch in the Ramskeller with Martin Van Buren. He is an American treasure.”

In 1965, Remini began his decades-long association with the University of Illinois at Chicago, where he was the inaugural chair of the history department and the founding director of the university’s interdisciplinary Institute for the Humanities. He was named a distinguished visiting scholar of American history at the John W. Kluge Center at the Library of Congress in 2002. While there, he researched and wrote The House: The History of the House of Representatives (Smithsonian, 2006), a project authorized by Congress. And in May 2005, Dennis Hastert, then speaker of the U.S. House of Representatives, appointed Remini the official historian of the House, a nonpartisan position he held until his retirement in 2010.

When the National Endowment for the Humanities invited Remini to deliver its inaugural Heroes of History Lecture in 2003, he chose as his subject the members of the First U.S. Congress, which convened in New York City in 1789.

“They deserve to be called heroes because they set aside their local and regional differences, their economic and personal prejudices, in their effort to make the Constitution succeed and thereby establish an enduring union,” he said. “They had many disagreements, but they resolved them in compromise.”

Remini received many honors for his work, including the 2004 Freedom Award from the U.S. Capitol Historical Society for his “outstanding contributions to preserving and communicating the history of our nation.” His most recent book, At the Edge of the Precipice: Henry Clay and the Compromise that Saved the Union(Basic Books), was published in 2010. In November of that year, the Fordham Alumni Chapter of Washington, D.C., honored him with its Distinguished Alumnus Award.

Remini’s wife, Ruth, died in May 2012 at the age of 90. He is survived by two daughters, a son, and three grandchildren.