Joseph “Jay” McGowan, PhD, president of Bellarmine University and former dean of student affairs at Fordham for 21 years, died suddenly, but peacefully, at his home in Louisville, KY. He was 71.

McGowan, known for his intellect, diplomacy, drive for perfection, and his Elvis impersonation, arrived at Fordham in 1969 in the midst of one of the most tumultuous times on campus.

“The Fordham community mourns the loss of one of its greats,” said Joseph M. McShane, SJ, president of the University. “Dr. McGowan was a man of tremendous vision, compassion, and integrity. His tenure at Fordham was transformative, likewise his legacy at Bellarmine is nothing less than miraculous. Our hearts go out today to his family, loved ones, and colleagues.” 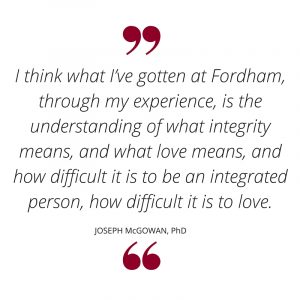 “I found him a very kind, thoughtful, and intelligent administrator,” said Joseph A. O’Hare, SJ, the former president of Fordham. “He listened to people even when situations were uncomfortable.”

McGowan arrived nearly a year after African-American student demonstrators barricaded the then dean of student affairs, Martin Meade, PhD, in his office. While the New York Times called the demonstration “quick and orderly,” it was significant enough to prompt the administration to hire McGowan as an assistant dean to help Meade navigate the explosive times.

The initial focus of his work was to respond to student demands, which eventually gave birth to the African American History Department, one of the first departments to incorporate interdisciplinary work.

In Fordham: A History and Memoir, Raymond A. Schroth, SJ, writes that McGowan “put a human, credibly face for student affairs office and did not come across as too much of either a ‘cop’ or a ‘nice guy.’”

In an oral history that McGowan gave before leaving Fordham in 1990 that was reprinted in the book, McGowan reflected on how the years at Fordham changed him. 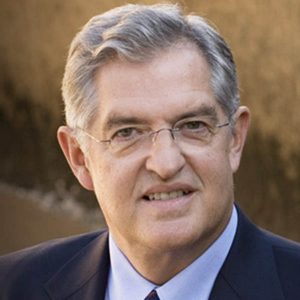 In leaving for Bellarmine, McGowan joined a legacy of Fordham deans who went on to become college presidents throughout the country. Once in Louisville, he transformed what was then a college with 15 building and 2,500 students into a university with 67 buildings and nearly 4,000 students.

“He used to joke, ‘at my deepest level, I’m pretty shallow,’ but no way—Dr. McGowan was a complicated, impressive, wonderful, passionate human being, a giant, and he occupied enormous emotional space in each of our lives,” said Hunt Chouteau Helm, PhD, vice president for communications and public affairs at Bellarmine. “He was a transformational University president. He was presidential. And, he was Elvis.”

Though he left Fordham more than 20 years before the 2013 interview, McGowan said he still held great affection for his time at the University.

“I will forever love Fordham University and celebrate its Catholic culture and ethos,” he said. “It came down to this DNA, it’s in the Fordham genome, which is the recognition of the intrinsic value of every person.”

It was also an ethos that he held personally.

“He was off-the-charts demanding when it came to ‘the pursuit of excellence in everything we do,’” said Chouteau Helm. “But if there was a real worry in your personal life—or something great to celebrate—he could not possibly have been more present or more caring.”