Andrew Fasulo, a member of Fordham’s Department of Public Safety for the last nine years, died suddenly on May 14 after suffering a heart attack at his home in Cortlandt Manor, New York. He was 57. 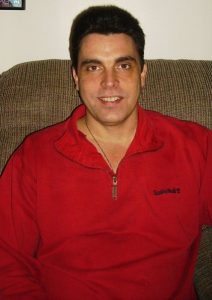 Fasulo, a member of the department’s Lincoln Center campus detail, started at Fordham in 2011. A retired police officer, he joined the New York City Police Department on January 9, 1986, and was assigned to the 50th Precinct in the Bronx. He was promoted to the rank of sergeant in 1990 and assigned to the 46th Precinct in the Bronx. In 1996, he was transferred to Manhattan North Narcotics, where he remained until his retirement in 2006. He managed security operations at VSTAR Security Systems, Deutsch Bank, and Bank of America before joining Fordham.

“Andy Fasulo was a great guy who was always there—every day, and when you really needed him. He was a conscientious and key member of our public safety team,” said Robert Dineen, director of Public Safety at the Lincoln Center campus.

“He had unique talents that he brought to our operation. Anything to do with computers or computer programming, like building a database, Andy was our guy. He was our computer whiz. I know I speak for the whole public safety team in saying he will be deeply missed by all. Our thoughts and prayers are with Andy’s family and his loved ones at this very sad time.”

“His compassion for our Lincoln Center community, particularly for residence students who he encountered during overnight shifts, was so evident. Andy was truly professional,” he said.

“In a service-oriented department, Andy stood out as someone who was always willing to go the extra mile for members of the Fordham community,” he said.

“Our hearts are broken for Andy’s family. He was a member of our family as well, and we will miss him dearly. I know you all join me in keeping Andy’s loved ones in our thoughts and prayers during this dark time.”

Like many of his colleagues, Fasulo responded to the call to help others at Ground Zero in the aftermath of the 9/11 terrorists attack, according to the family obituary. An avid learner who kept himself busy trading in the stock market and taking on home improvement projects, he enjoyed rooting for the Yankees and the Giants and attending Pink Floyd cover band concerts, the obit said.

“To those who knew him, Andrew was known for his huge capacity to love and serve people, especially his family. He could light up any room with his smile and draw a crowd with his plethora of storytelling,” his family noted. “His infectious laughter could be heard for miles.”

His son Michael said his father was his “guardian in life.” He said his fondest memories of his dad are of vacations to the Jersey Shore and parks like Busch Gardens, where they rode the Lochness Monster ride together even though Fasulo hated rides that went upside down.

“I talked to him on a daily basis, and he loved it at Fordham. He loved everyone he worked with, the guard staff, the kids, everything,” he said.

Fasulo’s sister Nancy joked that they used to call him “Mr. Google,” on account of the mix of facts on a range of subjects he could share on moment’s notice. When she got into an accident in the 2001 Hyundai Elantra that he’d given her, he rebuilt it himself, and she still has the car to this day in her driveway.

“He was a great husband, and a great brother to me and my sisters. He always made taking care of his family his number one priority,” she said.

Fasulo is survived by his wife Suzanne; his three children, Christina, Michael, and Andrew; and his sisters Susan Mayfield (Thomas), Nancy Fasulo Jones, and Debra Lynch (Donald). He is also survived by his nieces Tara, Rachael, Sarah, and Meghan; his nephews Evan, Thomas, Sean, Matthew, and Connor; numerous uncles, aunts, and cousins; and seven great-nieces and nephews.

A private burial will take place at the Rose Hill Cemetery in Putnam Valley, New York. In lieu of flowers, the family requests donations be made to the American Heart Association in his memory.