Christopher Schmidt-Nowara, PhD, a Magis Distinguished Professor of History at Fordham who taught from 1998 to 2011, died on June 27.

According to Tufts University, where he was a professor of history and holder of the Prince of Asturias Chair in Spanish Culture and Civilization, Schmidt-Nowara died after a brief illness while visiting his daughter in Paris. He was 48. 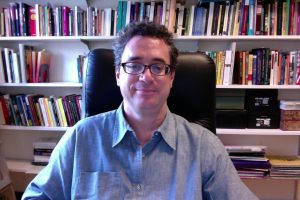 Nicholas Paul, PhD, associate professor of history and associate chair for graduate studies, said that his former colleagues “were very saddened to hear of his passing.” Paul said a tribute, written by Schmidt-Nowara’s former graduate student and doctoral student in history, Louie Dean Valencia-Garcia, will be posted on the history department’s blog.

Schmidt-Nowara served as assistant professor of history at Fordham from 1998 until 2004, when he was promoted to associate professor. In 2005, he assumed the Magis Distinguished Professorship. From 2003 until 2006, he served as director of the Latin American and Latino Studies Institute.

His research concentrated on the history of slavery and emancipation in the Hispanic world and the history of politics and ideas in the Spanish empire, especially during the imperial crises of the nineteenth century.

His recent work included a study of Spanish prisoners of war during the resistance against French rule from 1808 to 1814, and the independence struggles in Spanish America between 1810 and 1830.

His hope was that this study of captivity on both sides of the Atlantic would bring new insights into Spanish ideas of freedom in imperial and national frameworks. It was a theme that he had pursued since his first book on Spanish abolitionism, Empire And Antislavery: Spain Cuba And Puerto Rico 1833-1874 (University of Pittsburgh Press, 1999).

Most recently, he was editing and annotating the 400-page unpublished diary of the Spanish prisoner of war Fernando Blanco y Crespo, who recounted his dramatic escape from captivity in France during the waning days of Napoleon Bonaparte’s rule.

He served on the editorial board of three journals: Bulletin for Spanish & Portuguese Historical Studies, Illes i Imperis/Islands and Empires and Social History, for which he edited two special issues while at Fordham, one on contemporary Spanish historiography and the other on emancipation in the Caribbean.

In addition to his daughter, Althea, he is survived by his mother, his father, a sister, and a brother.