skip to main content
Return to Fordham University
You are at:Home»Fordham Magazine»Features»Fordham Marks 20th Anniversary of 9/11 with Services, Stories, and Reflection
During a Sept. 11 memorial service in the University Church, everyone faced south toward lower Manhattan and raised their hands in blessing. Photo by Bruce Gilbert
As the 20th anniversary of the Sept. 11 attacks arrived, members of the Fordham community marked the occasion by commemorating those who died and by recalling stories from that day—and the lessons they continue to impart.

Twenty years later, “we continue to weep for those families whose lives were changed forever in an instant,” said Joseph M. McShane, S.J., president of Fordham, during a Mass of Remembrance held Saturday, Sept. 11, in the University Church. “We protest not only the loss of what was but also the loss of what might have been in the lives of the victims.” 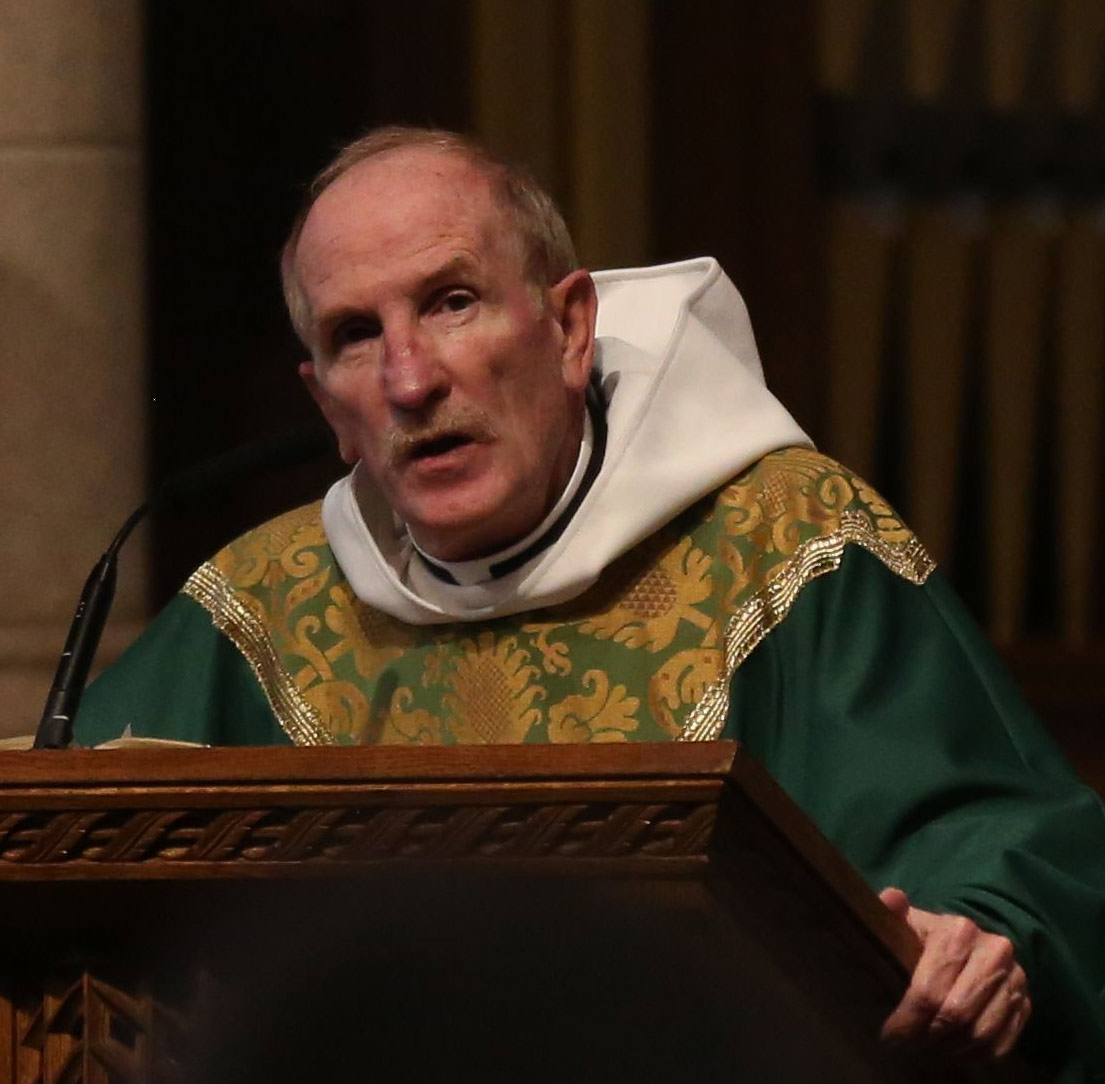 Father McShane speaking from the pulpit. Photo by Bruce Gilbert

He also cited the valor and heroism shown by police, firefighters, and others who risked—and lost—their lives in saving others during the attacks, as well as those who, facing the prospect of imminent horrific death, used their final moments to open their phones and send messages of encouragement and love to those they would be leaving behind.

“I believe it is not too much to say that in the way that they faced death, they taught us how to live,” Father McShane said.

The Mass followed an interfaith prayer service held the evening before, in which about 20 people gathered at Cunniffe Fountain on the Rose Hill campus and then walked to Finlay Gardens, the site of Fordham’s memorial to the three students and 36 alumni who died in the Sept. 11 attacks.

“We bring our hearts together as a community so that our remembrance, our commitment, our hope, and our light may burn more brightly in the world,” said Joan Cavanagh, Ph.D., GSE ’05, ’17, the University’s director of spiritual and pastoral ministry, during the service. 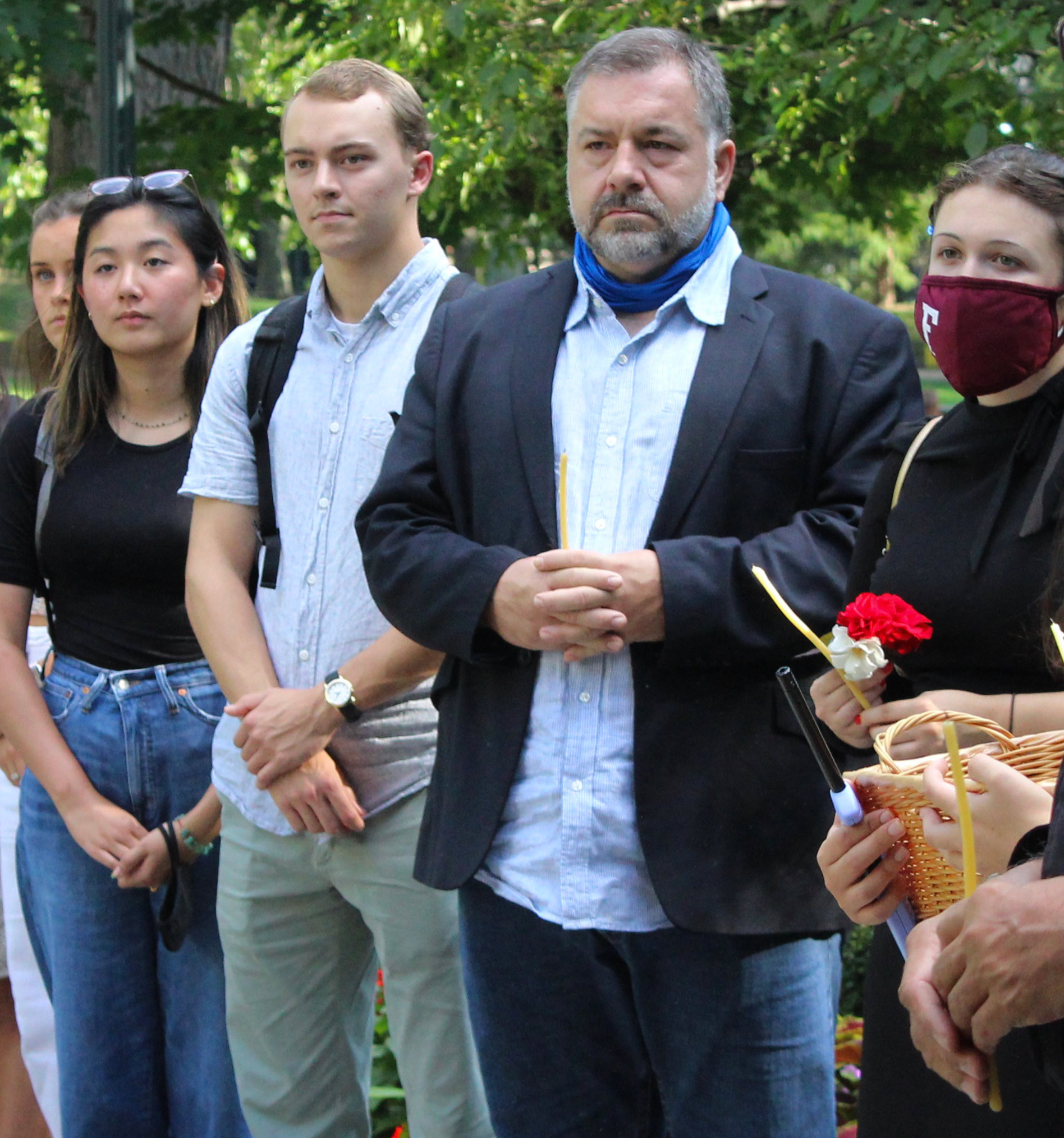 People at the interaith prayer service. Photo by Taylor Ha

The service included prayers from different faiths, with readings from the Bible and the Koran, as well as a singing of “Amazing Grace.”

Students read aloud the names of the members of the Fordham community who died on 9/11. After a closing prayer, students placed a few yellow roses in a vase at the base of the memorial.

“Let us remember that we are called to take our individual life and let it shine brightly each day, wherever we are,” said Kathryn Anderson Kuo, associate director of campus ministry for liturgy, in closing. “Perhaps whenever you pass by this memorial, you might ask yourself, how am I bearing witness to the lives of those that have gone before me? How am I letting my light shine, and how am I bringing peace to those who cross my path each day?”

One attendee, John DiDonato, was a 35-year-old MTA subway conductor who had planned to do some sightseeing at the World Trade Center on Sept. 11. But instead he stayed in his apartment, watching the nightmare unfold on TV. “It still resonates in my head, just watching the first tower go down. I still see it,” said DiDonato, a communication and media studies student at Fordham’s School of Professional and Continuing Studies.

On Saturday, at the University Church, Kevin Horbatiuk, FCLC ’78, LAW ’81, took to the podium to read out the names of all 39 Fordham students and alumni who died that day. At the close of the service, Father McShane asked all the people in attendance—numbering about 80—to turn around so they were facing south, toward the former site of the World Trade Center, and raise their right hands in blessing. 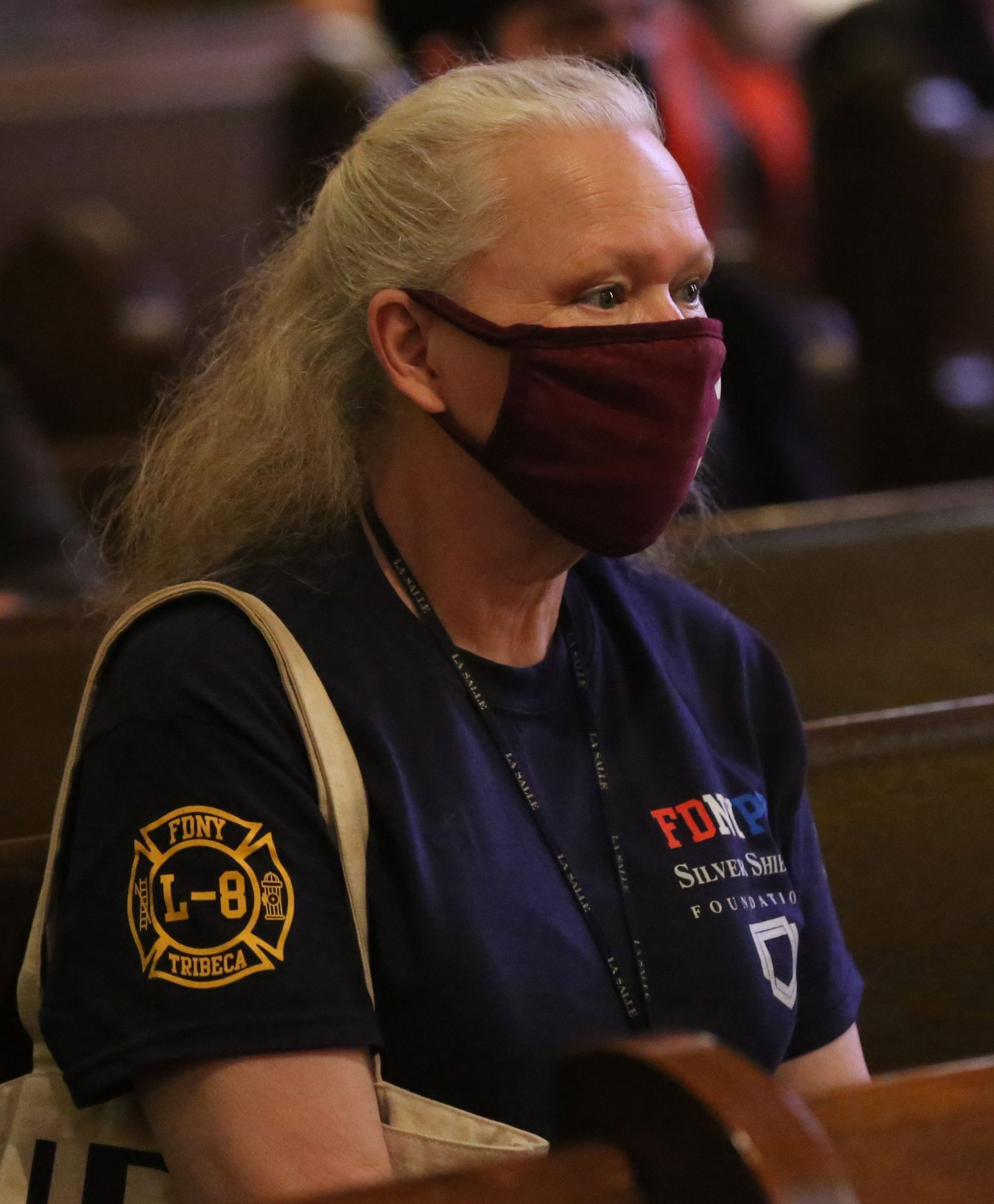 Following the service, people were still stopping by the memorial at Finlay Gardens to reflect. Sarah Bel, FCRH ’08, was visiting with her father, Roger Bel, who was working on the 56th floor of the South Tower. “Twenty years ago, in the morning, I thought I was going to die,” he said.

Headed down the stairwell after the first plane hit, he kept going when he was told it was OK to go back up to his office. He recalled helping a woman who was frozen with fright, curled up in a corner, to get out of the building. Asked what the 20th anniversary means to him, he cited the need for greater national unity.

“We really were American that day,” he said. “Everybody helped everybody.”

Caley Knox, a Fordham sophomore, lost her uncle, Thomas Patrick Knox, who was working in the World Trade Center at the time. “We’ve always talked about there being a missing piece” in the family, she said. “I just would have liked to know him.”

“He’s very alive through us, still,” said Knox, who was visiting the memorial with Marlaina Cirone, also a Fordham sophomore.

Cirone said her father watched both planes strike the twin towers from the roof of his business’s building on the Bowery. “It’s something my parents can never forget,” she said. “They know that their lives have been changed ever since that day, and I think for every New Yorker, it’s the same way.” 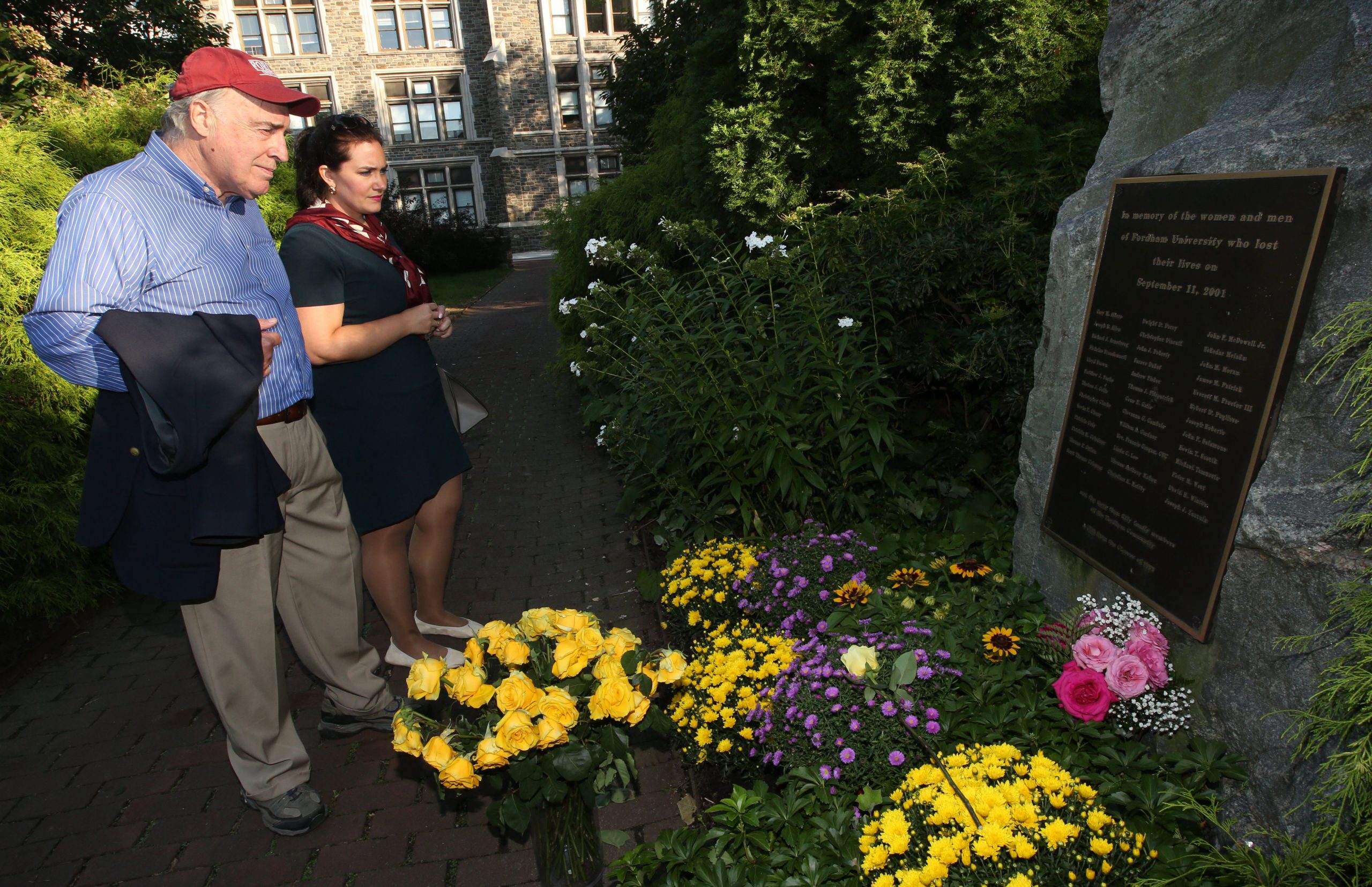