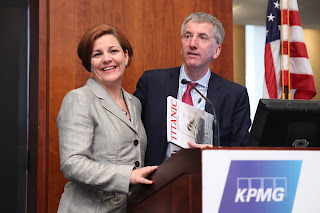 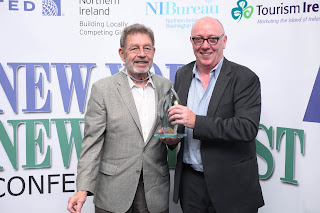 Christine Quinn, speaker of the NY City Council, likely mayoral candidate and a second-generation Irish-American whose grandmother was a survivor on the Titanic, gave the welcoming address to a packed house.

Quinn said that the annual conference, whose theme this year is “Community, Culture and Commerce,” gives New York and Belfast a chance to share best practices in city governance—especially in the areas of policing, entrepreneurship and tourism.

“The best type of culture is that driven by community experience,” said Quinn. “You can take tourism to the next level by not just focusing on the obvious cultural institutions, but [also]on those groups out there in our neighborhoods.”

Quinn also paid homage to her late grandmother, who, she said, “knew there was a time for praying and a time for running.”

New York journalist and editor Pete Hamill received the Irish American of the Year award. The Brooklyn-born Hamill said he wished his parents, both from Belfast, could be with him, but said the lessons his mother had taught him about respecting other immigrants, and those less fortunate, had stuck with him over the years.

“Belfast in particular is part of my DNA, but I am also a little Jewish, a little African American, a little Mexican, Italian-American.

“We owe something to a country that took us by the hand and gave us the opportunity to become something other than a stereotype,” he said. “I hope that none of us in this room ever forget that the people coming here . . . the Mexicans in Sunset Park living in flats that the Irish used to live in . . . they are us. We owe it to them to help them get up, to make sure they get the educations their mothers and fathers fought hard for.”