skip to main content
Return to Fordham University
You are at:Home»University News»Fordham Joins Nationwide Effort to Recruit and Retain Middle- and Low-Income Students 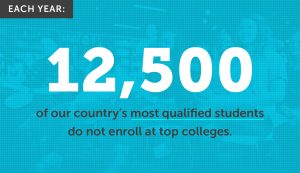 Few would dispute that an educated public makes for a competitive and industrious nation. But in any given year, at least 50,000 low- and moderate-income students at the top of their class do not enroll in one of the nation’s top-performing institutions.

Now Fordham is joining a coalition of prestigious universities nationwide with a stated goal of educating, by 2025, some 50,000 additional high-achieving, lower-income students at the 270 colleges and universities with the highest graduation rates.

Known as the American Talent Initiative (ATI), the coalition was formed last year with the support of Bloomberg Philanthropies, to enhance coordination among top colleges in identifying and recruiting these lower-income students.

Of the 270 colleges with highest graduation rates, 68 have committed to the program, with Fordham joining 38 new members this year, along with Columbia and New York Universities. 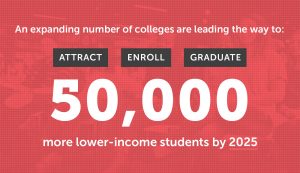 “Too many students from low-income families are missing out on opportunities to attend top colleges because they think those colleges aren’t affordable–when most often, they are,” former New York City Mayor Michael Bloomberg said in a statement.

According to recent studies, at least 12,500 high school seniors per year have SAT scores in the top 10 percent, with 3.7 grade point averages or higher, but still do not attend top tier colleges because they lack information about their options, confusion about costs, and inadequate financial aid.

“We’re aiming to help all ATI members enhance their own efforts to recruit, enroll, and support lower-income students, learn from each other, and contribute to research that will help other top colleges and universities expand opportunity,” said Martin Kurzweil, director of the Educational Transformation Program at Ithaka S+R, which is co-coordinating the program with the Aspen Institute’s College Excellence Program.

The co-coordinators will help member universities share institutional data to be published annually and track members’ progress toward meeting the 2025 goal. Colleges and universities participating also use their shared data toward best practices that ensure those students graduate.