skip to main content
Return to Fordham University
You are at:Home»University News»Fordham Joins Call to Address Climate Change
Solar panels being installed on the roof of Walsh Library in 2009 as part of Fordham’s commitment to shrink its carbon footprint
Fordham has joined the leaders of 161 Catholic colleges and universities, religious congregations, national organizations, and health care providers, in a call for President Trump and the U.S. Congress to support climate change science, funding and international policy negotiations.

The letter, which was made public on November 16, was written by Catholic Climate Covenant and signed by the leaders of over 150 Catholic colleges and universities, religious congregations, national organizations, and health care providers.

“As leaders of Catholic organizations in the United States, we write with one voice to urge you to reassert U.S. leadership in the global effort to address climate change. On behalf of people who are poor and vulnerable and future generations, we especially ask that you act based upon the best available climate science; fund the United Nations Framework Convention on Climate Change (UNFCCC) and Intergovernmental Panel on Climate Change; honor U.S. commitments to the Green Climate Fund; and meaningfully participate in the deliberations of the UNFCCC,” it says.

The letter is the latest in a series of statements that Fordham has issued on climate change. In June, the University joined 180 colleges and universities in pledging its support to the Paris Climate Agreement, and in May, it signaled support for carbon pricing. 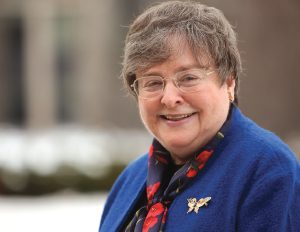 Elizabeth Johnson, CSJ, distinguished professor of theology at Fordham and author of Ask the Beasts: Darwin and the God of Love (Bloomsbury, 2015), said the letter shows a willingness of the University be a voice for the earth in a time of crisis, to join with people of good will who are trying to affect policy, and to carry forward Catholic teaching with regard to the issue of the earth.

“I would also say it’s common sense. If the house is on fire, you try to put out the fire. That’s what this is about in terms of climate change,” she said.

“If you believe in a God who created this world, then certainly that carries with it the sense that you need to care for this earth in all its greatness and beauty, which we’re destroying with our behavior.”

The letter was inspired in part by a November 3rd National Climate Assessment from thirteen federal agencies that concludes:

“[B]ased on extensive evidence, that it is extremely likely that human activities, especially emissions of greenhouse gases, are the dominant cause of the observed warming since the mid-20th century. For the warming over the last century, there is no convincing alternative explanation supported by the extent of the observational evidence.”

The letter requests that the President and Congress:

2. Meaningfully participate in the deliberations of the UNFCCC

“We heed the call of our Church, which implores, ‘As individuals, as institutions, as a people we need a change of heart to preserve and protect the planet for our children and for generations yet unborn.’ We hope that you will accept our appeal, so that we may continue to dialogue and work together to manifest this change of heart,” it ends. 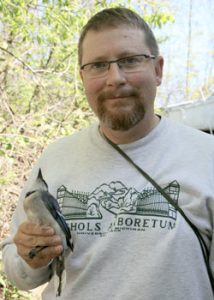 J. Alan Clark, Ph.D., associate professor of biological sciences, noted that he and many of his colleagues have had to factor climate change into their own research. Conducting that research at a Jesuit institution that embraces an ethos of cura personalis (care for the whole person) also helps focus efforts on environmental issues that affect humans and non-humans alike, he said.

“The focus is not just on the academic side of intellectual inquiry, but also the persons’ place in the world,” he said.

It’s also in line with Pope Francis’ 2015 Encyclical Ladauto Si,  which called for greater efforts to become familiar with the problem of climate change and the solutions to it.

“The action being called for in this letter are not large; it’s actually small. But it’s important, because it raises an awareness and it places the signatories in a place where they say, ‘We care about this, and we want you to know this.’ Those things matter.”