skip to main content
Return to Fordham University
You are at:Home»University News»Fordham in Community Brings Back-to-School Festival to Fordham Plaza 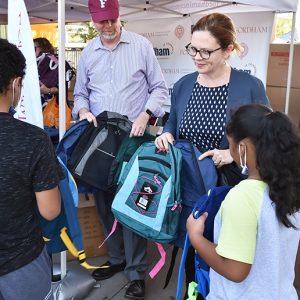 Photos by Dana Maxson
On Sept. 2, Fordham’s Center for Community Engaged Learning (CCEL) sponsored a blockbuster Back-to-School Festival that animated Fordham Plaza with nearly 3,400 schoolchildren and their parents. The families received school supplies donated by participating partners at the Friday afternoon event, which was part of the center’s Fordham in Community initiative.

“When we had our Fordham in Community summit back in May, so many of us talked about that event being the first step and what community solutions could look like,” said Julie Gafney, Ph.D., director of the center. “I think today what we’re seeing is that second step; we’re putting it into action and we’re doing it in a way that I hope feels inclusive and celebratory. We are connecting folks with services, but this feels like a party.”

Partners Working in Full Force and in Coordination

Fordham Plaza reopened in 2016 with a pedestrian-friendly design by world-renowned Grimshaw Architects. But it wasn’t until this past week that Fordham University held a large-scale event in the public space that shares its name.

“There’s a good reason that it took a while to hold a big public event on the plaza,” said Surey I. Miranda, CCEL director of campus and community engagement. While CCEL has a deep bench of talent when it comes to community organizing, obtaining the many city licenses for an event on the plaza was a herculean task made doable because the “partners worked in full force and in coordination,” she said.

While Miranda said that all the participants worked tirelessly, she did want to single out the Fordham Business Improvement District for their help in permitting, insurance, rallying city vendors and coordinating with the NYPD for public safety. She said their help laid out a blueprint for future events.

From ID cards for children provided by the NYPD Community Affairs Bureau, to Fair Fares, a program by the NYC Human Resources Administration that provides reduced-cost metro cards to low-income New Yorkers, organizers set out to equip local students and parents with the basics for start of the academic year. Bronx Library Center provided library cards, pens, and pencils; The Bronx is Reading gave out books; and the piragua ice cart men struggled to keep up with the demand. 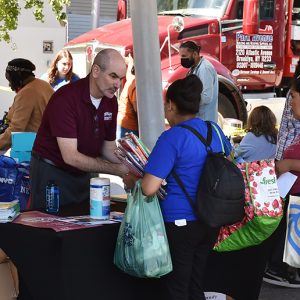 In addition, several University-based programs had tables manned by faculty and staff. Professor of Philosophy Stephen Grim beamed from behind his table for Visions of Good in the Bronx, a philosophy and college prep program for high schoolers sponsored by the Teagle Foundation; Institute of American Language and Culture Director James Stabler-Havener explained his office’s ESL program for Latina Leaders; and Fordham Athletics distracted the kids with games and activities.

“We hope that we can continue to grow these collaborations and that elected officials and other organizations join us in the effort to uplift our communities while supporting one another,” Miranda said.

Several local officials were on hand to cheer on the effort, including Bronx Borough President Vanessa L. Gibson, who gave a shoutout to Fordham and President Tetlow, who, like herself, was the first female president in her role.

Fordham students hand out snacks for the school lunches.

“We do not do these events by ourselves, it truly takes a village,” said Gibson. “So can we give it up for the NYPD?! We see you! Fordham Road BID! The Bronx is Reading—give it up! New York Botanical Garden—in the house! Union Community Health Center! VIP Community Services! Street Lab! Wildlife Conservation Society! New York City Department of Health! New York City Commission on Human Rights! Administration for Children’s Services, and so many more!”